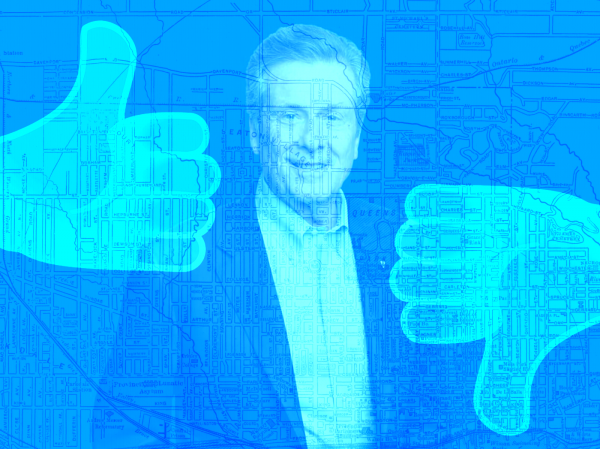 Last week, Spacing contributor Anthony McMahon argued that it is time for Toronto City Hall to have political parties, similar to those established in Montreal and Vancouver. McMahon argued that parties bring real, obvious options to voters, who are simply presented with a list of names on a ballot. Though there are arguments to be made that having city councillors unbridled by the constraints of party discipline makes for better decision making, the existing system favours long-time incumbents that trade primarily on their name recognition.

One can also make the argument that there are already informal parties at City Hall, as evidenced by the endorsements and active support for candidates by Mayor John Tory, elected MPs and MPPs (who, of course, represent political parties), and by third-party organizations such as left-leaning Progress Toronto. These endorsements have been tracked by freelance journalist and municipal data nerd Matt Elliott.

In this election, Tory is backing a slate of 12 council candidates, spending much of his campaign’s time and resources supporting them, rather than focus on the mayoral race, where he remains the frontrunner. Once again, Tory is supporting Mark Grimes and Brad Bradford, along with six other right-leaning incumbents affiliated with the Conservative or Liberal parties: Frances Nunziata (Ward 5 York South-Weston), James Pasternak (Ward 6 York Centre), Mike Colle (Ward 8 Eglinton-Lawrence), Gary Crawford (Ward 21 Scarborough Southwest), Nick Mantas (Ward 22 Scarborough-Agincourt), and Cynthia Lai (Ward 23 Scarborough North).

Tory is also backing three candidates in open races, where there is no incumbent. In Ward 9 Davenport, Tory is supporting Grant Gonzales, a co-chair of Pride Toronto and a municipal lobbyist whose clients included the Ontario Retirement Communities Association and Airbnb. (Gonzales is also supported by local Liberal MP Julie Dzerowicz.) In Ward 16 Don Valley East, Tory has chosen to support Jon Burnside, a former police officer, councillor, and an architect of the police clearance of park encampments in 2021. in Ward 18 Willowdale, Tory is supporting Markus O’Brien Fehr, chief of staff to outgoing progressive councillor John Filion.

The nastiest fight may be in Ward 4 Parkdale-High Park, were Tory is supporting Siri Agrell — a former staffer in the mayor’s office — against left-leaning incumbent Gord Perks, who has been one of Tory’s most vocal critics. However, Perks may be vulnerable after 16 years in office, especially when road safety on Parkside Avenue has become a local concern. In that ward, it may be a three way race between Perks, Agrell, and Parkdale activist Chemi Lhamo.

Tory’s campaign has stayed out of the three downtown wards — all of which will elect new representatives this year — nor has he backed a candidate running against Josh Matlow in Ward 12 Toronto-St. Paul’s, who rivals Perks as one the mayor’s fiercest critics.

Countering John Tory’s centre-right coalition is Progress Toronto, an independent third party organization whose mission is to “promote a democratic, socially just, and progressive Toronto.” For its part, it trains and supports emerging, progressive political talent, and in this election it has its own slate of nine “champions.”

Though several of Progress Toronto’s supported candidates are affiliated with the New Democratic Party, the organization selected its champions based on their responses to a survey of issues, while strategically targeting key wards. According to Executve Director Michal Hay, that meant “choosing local races where we think we can deliver a block of votes that can make the difference in whether a progressive candidate wins.” For them, this “is most often candidates running for the first time or who aren’t yet elected that this applies to most.” This strategy explains why Progress Toronto, unlike Tory, isn’t backing any incumbent councillors.

In five wards, Tory’s picks are up against Progress Toronto’s champions, and will be races to watch on Monday. In Ward 3, there will be a rematch between Mark Grimes and Amber Morley, with Progress Toronto targeting Grimes specifically as one of three villains it hopes to defeat (the other two being Frances Nunziata in Ward 5 and Gary Crawford in Ward 20). Bravo will up against Gonzales in Ward 9, while Myers will be running against first-term councillor Cynthia Lai, who Tory also endorsed.

With Tory’s unprecedented endorsement of a slate that could make up a council majority, and Progress Toronto’s counter offensive, it is almost as if there were already municipal parties. As in other Canadian cites with local parties, the lines differ from the provincial and federal establishments (in Vancouver, the ABC Vancouver slate, a coalition of Conservatives and federal and provincial Liberals led by businessman Ken Sim, recently defeated progressive parties Forward Together and TEAM). Though Tory is backed by Conservatives and many Liberals, other Liberals have found their home on the progressive wing along with New Democrats and unaffiliated members. Meanwhile Josh Matlow, a proud Liberal, remains fiercely independent on Council.

Municipal parties would be just one way to reduce the incumbency advantage. Perhaps it is time to recognize their informal presence at City Hall and go all in.