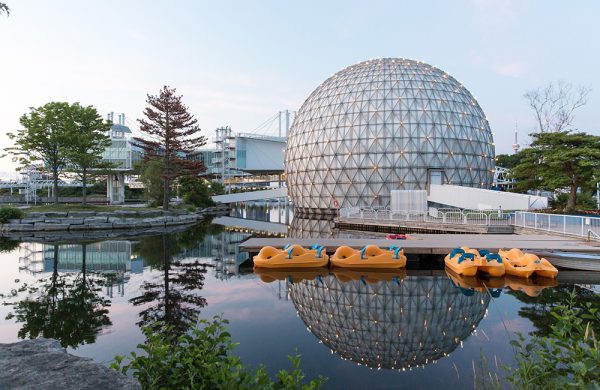 When Sidewalk Labs rolled into Toronto in 2017, there was no ambiguity about the corporate family tree. Sidewalk officials repeatedly said the smart city start-up venture was a kind of mash-up: Google/Alphabet’s money and some of its tech people in a shotgun marriage with an assortment of New York planners, real estate types, lobbyists and alumni of former mayor Michael Bloomberg’s administration. On this point, at least, they were transparent.

Therme Canada, the latest deep-pocketed firm with designs on a chunk of Toronto’s waterfront, is a far more opaque organization, privately held, with no publicly disclosed source of financing besides the entry fees and ancillary revenues generated by its spas.

Even as the second round of public consultations about the firm’s plans for Ontario Place’s West Island gets underway, most Torontonians know only a few details about Therme: that it’s Austrian, privately-held, and owns four spas in Europe, all of them located on large sites on the outskirts of cities like Bucharest. It describes itself as a “global well-being leader” and is planning to significantly expand, opening other spas in the U.K., northern Europe and the U.S.

The Ontario government’s consultation website has no information about either Therme or Live Nation, which seems like an oversight, as they were the successful proponents of a nine-digit RFP that will utterly remake one of the city’s preeminent parks.

The company, however, has deep local connections, overseen by executives who have worked in the office of Premier Doug Ford as well as lobbyists such as StrategyCorp’s John Perenack and Leslie Noble, and Amir Remtulla, Ford’s former EA from his days at City Hall. Its local architect is Diamond Schmitt, whose renderings have stirred controversy since they were made public in the summer. The estimated cost of the spa is $350 million.

So what, exactly, is Therme?

The company traces its roots to an Austrian architect and civil engineer named Josef Wund, who was, according to the accounts I found, pre-occupied with the therapeutic benefits of swimming. Wund, born in 1938, worked on large industrial projects, but began building spas in the 1990s, ultimately opening three, at a cost of €117 million. In central Europe, there’s a long tradition of spas and thermal baths in scenic retreats like Baden.

“In order to secure his remarkable life’s work in the long term, to express his gratitude to people who trust him and to do even more justice to the social responsibility he has always lived in an exemplary manner, Josef Wund founded the Josef Wund Foundation GmbH in agreement with his family,” according to a testimonial on the Foundation’s website.

This description elides a few important details: In 2011, he had to appear in a Stuttgart court to face charges of bribery; news reports indicate the charges were dropped in exchange for a large charitable donation. The Wund Foundation was established four years later and has its offices in Stuttgart, where it supports charities working in the arts, education and health.

In 2017, Wund died in a plane crash, and the company was acquired by a Vienna-based industrial conglomerate called A-Heat Allied Heat Exchange AG, whose subsidiaries include not just the Therme Group, but also firms that make heat exchangers for sectors such as food and chemical processing, air conditioners, and refrigeration systems for trains, etc.

Therme itself has an engineering consulting division called Delta X, which has been operating in Stuttgart for 30 years and works in a wide range of sectors, from automotive to plant construction. All of these firms are privately held, but the corporate family tree suggests that Therme was a strategic acquisition for a larger company with a vertically integrated structure.

There’s no public information I could find to indicate the source of the financing that is underwriting the company’s latest efforts to expand its footprint, although a pair of U.K. spa projects, in Manchester and Glasgow, offer some hints.

In 2020, Therme announced it would be proceeding on a US$325 million spa in Manchester, to be located in an industrial suburb near two large highways. Planned as a 700,000 sq.-ft space, the facility will occupy an 11 ha (28 acres) site, and is scheduled to open next year. In that case, Therme’s real estate partner is Peel L&P, a large British property developer that specialized in brownfield sites and has a £2.4 billion portfolio.

Peel is also the developer of Therme’s Glasgow project, which will be situated on a former industrial canal site and is being bundled with a hotel, and condos. The project includes a low carbon heat network designed to provide energy to 1,100 apartments as well as the spa itself. The Scottish government last summer announced it would be picking up part of the cost of the network.

So far, the Ontario government hasn’t indicated whether its revitalization plans for Ontario Place will include a development partner beyond Infrastructure Ontario itself.

The grant for the low-carbon heating project is by no means a one-off. To smooth its arrival into new markets, Therme has been active in positioning itself as a good corporate citizen — a tactic that will be familiar to anyone who watched Sidewalk’s arrival five years ago.

In Manchester, for instance, the company sponsored a large marathon run, a deal that included naming rights. It donated money to the British Council so it could be the platinum backer for the country’s exhibition at the Venice Biennale.

Art, in fact, is one of the leitmotifs in Therme’s overlapping approach to business and philanthropy. The company has a Berlin-based division called Therme Art, which describes itself as a “cultural incubator” and supports or commissions artists, architects and their projects. Therme has also published “green papers,” for example on its philosophy of “human cities,” presumably as a way of dressing up its presence in the wellness industry.

When Ford unveiled Therme as one of the winning firms for the Ontario Place revitalization last year, the company took care to tout its social and cultural philanthropy as an example of how it advances its mission. The local recipients of its corporate munificence include a deftly curated collection of organizations: the Mississaugas of the New Credit First Nation, Swim Drink Fish (formerly the Lake Ontario Waterkeepers), the Black North Initiative, and the Toronto International Film Festival (TIFF), with whom the company has forged a ten-year partnership called the “Cinematic Cities Initiative.”

TIFF’s website prominently features a lyrical quote from Therme’s Human Cities green paper. “Art is central to being human,” the passage. reads “It speaks to us of the past and the future, of loss and possibility, of suffering and hope. It suggests the existence of meaning outside of ourselves, of spiritual connection, of something more.”

Like, perhaps, a relaxing and pampered afternoon at the spa.