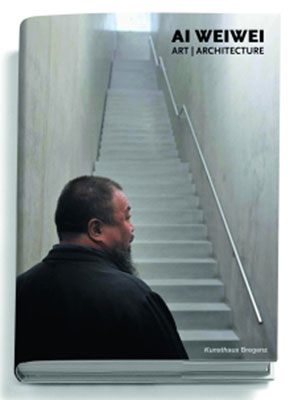 “…when I finished building my house, I learned that I was an architect.”

With 2012 about to draw to close, it is a good time to review some of the events—architectural and otherwise—that have defined the year. The CCTV in Beijing, ten years in the making, finally opened for business, and Lebbeus Woods slipped away at the same moment Sandy’s storm surge swept through the streets of Manhattan. Most recently of course, we lost one of the last great modern masters, Oscar Niemeyer, and who would’ve most certainly been working at his drafting table up to the end, just days before his 105th birthday.

2012 is also the year that the censorship of artist Ai Weiwei ended, following his three month imprisonment for close to $2 million in unpaid taxes, which lasted another nine months in the suspension of his activities online and in the media (his famous blog was shut down in 2009). Ai Weiwei: Art Architecture was then published in his absence, the subject being the exhibition of his work in the Kuntshaus Bregenz gallery in Germany during the time of his house arrest.

The book itself is a handsome collection of essays and commentary by Reto Geiser and Andres Lepik, accompanied by photography of the exhibition by Iwan Bann and others. The artist is perhaps best known for his collaborations with Swiss architects Herzog and De Meuron on the Bird’s Nest for the Beijing Olympics (and his subsequent withdrawal from the event), and more recently the Serpentine Pavilion in London’s Kensington Park this past summer.

What is less known is that he was a practicing architect up until 2008, having been commissioned to design over some fifty projects, even setting up an architectural practice called Fake Cultural Development Ltd. to conduct construction administration. As he explains to Andres in his essay, “in view of the complexities of cooperating with the construction companies, it had become too difficult to maintain control of each of the processes involved through to each project’s completion.”

More recently, his discouragement in pursuing architecture was reinforced by the Chinese government’s demolition of his studio in Shanghai. Ironically, he had been invited by the government to construct the studio under their supervision, whereupon they subsequently found some building regulation oversight that led to its demolition, including the eradication of its foundations.

Sadly then, the book is also a requiem for this artist’s architectural inclinations given that the astonishing body of work presented within will not be seen again. This includes a number of small, intimate houses; a large, master-plan for Jindong – a community for 100,000 – also designed (and unrealized) with Herzog and De Meuron; the study models used in the competition for what would become the Bird’s Nest; an astonishingly ambitious planning exercise called Ordos 100; and an exhibit of carefully sculpted wooden boxes called Moon Chest. The book’s final chapter, ‘Signs of Solidarity,’ is a series of photos showing the placards and signs waved in protest over his incarceration in 2011, including the installation of letters spelling ‘Free Ai Weiwei’ atop the Peter Zumthor designed gallery in which the book’s exhibit ran.

Of all the exhibited projects, none more clearly demonstrates Weiwei’s ambition to demonstrate the potential of architecture as a social condenser than his Ordos 100, in which he organized an invitation to 100 architectural firms around the world—again with the cooperation of Herzog and De Meuron—to design 100 villas in the growing city of Ordos in Mongolia. The final scheme was assembled like a massive wooden jigsaw puzzle, with designs from New York, Paris, Mexico City, Berlin, and Tokyo (even Toronto) to name only a few. As he explains: “Ordos 100 was a good opportunity for me to find out how we can best use foreign knowledge-resources as efficiently as possible in China. In the West, much more thinking goes on than building. In China it is the opposite.”

As apparent in the appropriately named documentary ‘Never Sorry’ (2012), in which he films the demolition of his Shanghai studio, Weiwei is the reigning gadfly on the face of his country’s Party politics.  As he is also fond of tweeting on an hourly basis, the internet is now too big for him to be censored. Likewise, he has been a cipher of architecture both passively and actively, perhaps best known for his protest over the government’s shoddy construction practices that were exposed during the Sichuan earthquake.

Whether giving the finger to some of the best known architectural monuments in China, preparing for his next exhibit at Turbine Hall in London’s Tate Modern, or dancing to the Korean sensation Psy’s ‘Gangnam Style,’ one can only wonder whether he will, in fact cease and desist his architectural explorations, despite his government’s best efforts to reign him in. Time will tell.