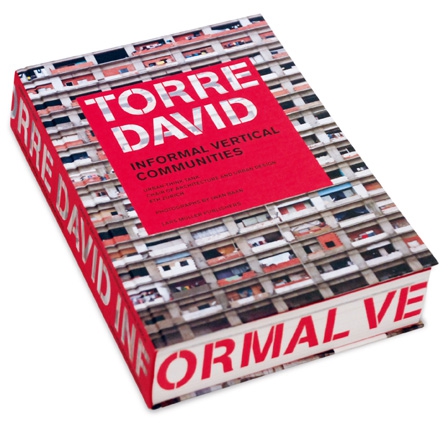 We believe that design – whether of buildings, public parks, or infrastructure – is an invaluable tool for improving lives. Torre David, with its magnificent deficiencies and remarkable assets, gives us the opportunity to consider how we can create and foster urban communities. Thus this book’s discussion of our engagement with Torre David is intended as a call to action to our fellow architects, and all those who hope to become architects, to see in the informal settlements of the world the potential for innovation and experimentation, and to put their design talents in service to a more equitable and sustainable future.

In 2003, the UN released a study, concluding that one billion of our planet’s inhabitants “live in circumstances that fit the classic definition of slums.” Given now that the images of these urban conditions – the favelas in Sao Paulo, the Kowloon in Hong Kong, and the shantytown around Mumbai’s airport – are part of our current conversation on the subject of architecture and the city, it was only a matter of time until the modern highrise also became a laboratory for a new informal urbanism.

Here in Metro Vancouver, where civic administrators are grappling with issues of affordable housing in the shadows of more and more residential highrise tower construction, we can only imagine the implications of an empty residential tower being overtaken by squatters—just as the abandoned Woodwards in Vancouver was numerous times in its pre-Westbank/Henriquez history.

But it is precisely this that has happened in the city of Caracas, Venezuela: a 45-storey tower called the Torre David, designed by renowned Venezuelan architect Enrique Gómez—in fact the third tallest structure in the city—had its construction come to a halt at 90% completion in 1993 when the project’s developer, David Brillembourg, suddenly passed away. The devastating 1994 collapse of Venezuela’s banks followed and the government bought the uncompleted building. It remains unfinished to this day.

However, despite a lack of working elevators, electricity, or even running water, the building was occupied by squatters in 2007, having created a cooperative to run the building and even improvising basic services to get power and running water up to the 22nd floor.

Without glass and even walls on some of the building’s upper floors, these accidental residents have chosen to live only up to the 28th floor of the main tower—creating such bizarre contingencies as a motor bike taxi service that runs residents living up to the tenth floor to their units in the unfinished car parkade that sits beside the tower. Building codes aside, seeing images of cars parked in a ten storey reinforced concrete structure without any form of safety guardrails (for car or pedestrian) is just plain eerie.

With over 3000 souls believed to be presently occupying the building complex, these people and their living quarters are the subject of Torre David: Informal Vertical Communities, a 416 page visual cornucopia of life brought to us by ETH Zurich, as part of their Architecture and Urban Design department. Known as Urban-Think Tank (U-TT), this group spent time inside the building getting to know the occupants, and even presenting ideas to them to improve their living conditions as part of a local social housing initiative.

While many of their suggestions include the obvious, like adding elevators and other working infrastructure, they have also suggested retrofitting the building with methods of sustainable energy harvesting and storage, such as adding solar panels and green roofs to the unfinished floors.

The book features photographic testimonials from the building’s occupants themselves, along with some of the manifestos from its building strata (the president of which is pastor of the local church, also housed in the massive complex), and all accompanied by carefully drawn plans, elevations, and sections of the building.

With respect to the photography of Iwan Baan, if a picture speaks a thousand words, the contents of the book could indeed be said to represent the complete works of William Shakespeare. As captured with his meticulous eye, he shows us in the book’s opening pages a view of Caracas seen from the unfinished, upper most floors of the building. Cracked plaster walls and broken flooring tile frame the views to the smog filled city. With their guard rail-less point of view, they are the point of departure to discuss Caracas and the recently departed Hugo Chavez—the larger context which is at a least partially responsible for Torre David.

Throughout the book, Iwan captures the simple humanity of the building (as well as some animal life, with pages 158 and 159 featuring some of the dogs living in the building), depicting everyday life in the courtyards and commercial spaces. Life is certainly evident in the smiles of the children living there, of a mother holding her child as her husband goes to work driving his motorcycle up and down the parkade, or of two brothers working out in the gym on the 28th floor – these and many other vignettes of everyday life give the book its richness, especially in its meaningful depiction of such diversity in this unusual community.

The book also features a sixteen page graphic novella by Andre Kitagawa, which cleverly summarizes the history of the building, showing how growth fueled by an oil boom in the 1970’s led to a population explosion in the city, ultimately resulting in its collision of formal and informal planning, and not unlike what is currently happening in other cities throughout South America.

Just as fast as modern city office towers and super freeways can be built with oil money, so to have the barrios and favelas grown, creating two conditions that literally overlap each other in certain places. The novella also depicts why the tower was abandoned, and how the current squatters came to occupy it in 2007, right up to the present day with U-TT presenting their designs to retrofit the tower to its occupants.

As recently pointed out in an Architecture Record editorial by Cathleen McGuigan, these rare and random instances of informal building types colliding with formal ones will soon not be so few and far between. Furthermore, we all know that nature abhors a vacuum, just as we know that an empty habitation is a contradiction of terms.

As such, Torre David is a valuable contribution to the discussion of informal settlements. It highlights how many lessons can be learned from this interesting occurrence in Caracas, which will not only spark positive change in Torre David, but hopefully spread to other similar urban conditions in order to prevent the need for such desperate acts.

Visit www.torredavid.com for ongoing updates of this U-TT project. You can also find out more information on the book from the Lars Mueller website.