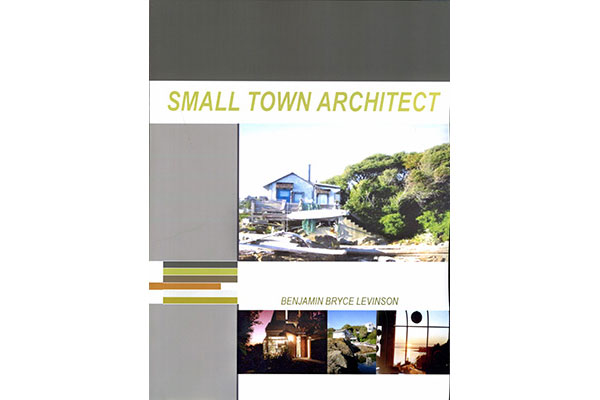 If, as an American screenwriter once wrote, the naked city does in fact have eight million stories, perhaps the same should be said of the career of the present-day architect. One could certainly make the case with Benjamin Bryce Levinson’s self-published Small Town Architect, portraying his entire career – from architecture school to retirement – in some 250 pages of personal anecdotes interspersed with professional milestones.

Having headed the firm of Benjamin Bryce Levinson Architect and Planners from 1982-2012, and with a broad range of project types in his portfolio including Central Saanich’s municipal centre – town hall, fire hall, and police station – he admits as much himself that the book’s intent is to be a blueprint for the next generation of architects. He also adds that, despite a pretty rough ride as of late, all might not be lost with the prospect of architecture as a career.

The book is also an homage to a vanishing aspect of the profession – the hand sketch – as certainly Mr. Levinson’s hand is most formidable, with drawings made on his travels featured along side his designs throughout the book. While the first half of the book is both autobiography and portfolio, the second half is more philosophical with the author remarking on the many hats the architect is expected to wear. This includes a list of chapters—not unlike that of Vitruvius—architect as draftsperson, accountant, sociologist, model builder, photographer, graphic artist, volunteer and philanthropist, and so on.

One chapter is devoted solely to the homes he has owned, while another is on all the single family homes he has designed. I must admit I would’ve liked to have seen the chapters on his projects expanded into larger sections of the book with plans and elevations, since without them the book is more almanac than monograph, more personal than promotional, which most likely was the author’s intent. It is in fact the book’s charm that it is not trying to be Rem Koolhaas’ S,M,L,XL or manifesto-like. As a result, the book has a quaint anecdotal sense of itself, modest in both its presentation and tone, with the author confessing no illusions of starchitecture fame or grandeur.

Yet another chapter portrays the architect as traveler, and takes on the tone of a log of cities visited and experienced with his wife, all annotated in marvelous hand sketches that populate the book’s margins. It would also appear that Benjamin did quite well designing and building swimming pools in his neck of the woods, as one other chapter is devoted entirely to this work.

Perhaps one of the most enjoyable sections of the book is entitled The Good, Bad and Ugly, in which he recounts episodes throughout his career in which he experienced one, two, or all three of these aspects with his clients, contractors, consultants, colleagues, even realtors and employees. Levinson finishes the book with three chapters concerned with the architect as journalist, educator, and urban planner, closing with some personal reflections – on his retirement, losing his hearing, and a musing on the future of the architect:

“The Architectural Institute of BC has seen the writing on the wall and has started a process to invite all specialties in building construction to be controlled under one umbrella institute. This in fact makes the architect of the future a specialist. Some architects have expressed great resistance to this new process. I think it is now inevitable that a cooperative approach to building will be taking place.”

Levinson goes even further in proposing an alternate educational process depending on the size of building the architect student wishes to specialize in. The final chapter is titled Advice to Future Architects, featuring fifteen salient points (and much briefer than Matthew Frederick’s 101 Things I Learned in Architecture School), with such aphorisms as “Do not be afraid to change or refine your direction,” and “Be a critic and challenge all.” He also encourages the young architect to learn as many languages as they can, and to take public speaking courses.

The book is ultimately then a microcosm of the mostly uncelebrated small town architect in our mainstream culture, not just in BC but all of Canada and around the world. Much like the subject of another Spacing book review on Salt Spring Island architect Hank Schubart, the work of these professionals goes mostly unnoticed, but is the background and backbone of the architecture around us.

What’s more, as we urbanize our planet more and more each day, the small town architect is threatened with extinction as much as the small town in which they practice. If we are not careful, we threaten to not only forget our past such that history repeats itself, but even more our reliance on this new digital behemoth may very well result in a collective amnesia of our immediate past.

It was after all not that long ago that the only way to present an architectural idea was with paper and pencil, much as the only way to write was with a typewriter. And if Mr. Levinson’s book is anything, it is a window to this immediate past, and how important it is we do not forget it. In his own words:

“My story tells of the diversity of projects of one architect and his contribution to society. The story is not remarkable but it tells of common events in which every small town architect participates.”