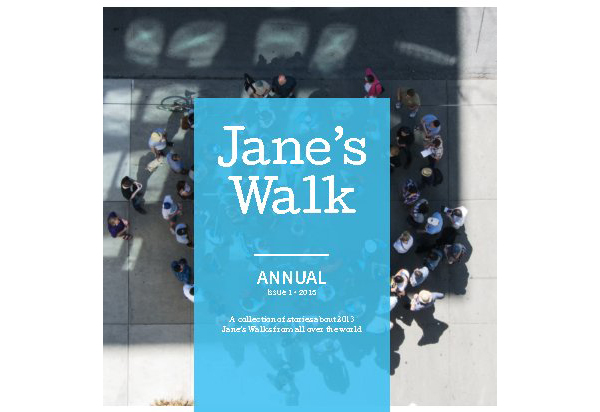 “This book is about what can happen when people get together and go for a walk. In Guadalajara, they made a citizen’s crosswalk by tracking paint across the road. In Zurich, they took turns wearing blindfolds and being led through a busy shopping concourse. In Calcutta they ventured out to the wetlands at the city’s brink. In Ottawa and Colchester, children led tours of their favourite parks. In these and nearly a hundred other cities around the globe, people from all walks of life organized and participated in Jane’s Walks – walking conversations about the stories, ideas and issues that animate the places where they live. In this inaugural edition of the Jane’s Walk Annual, they share those conversations in their own words and pictures.”

Over one special weekend last May, thousands of people around the globe took a walk through their respective neighbourhoods in order to gain a greater sense of the history of where they lived. In so doing, they collectively shared in the memory of Jane Jacobs, the celebrated urbanist and author whose passing eight years ago prompted these annual walks to begin. With this year’s walks just a few months away, it is a good moment to reflect upon her legacy and marvel at how her spirit could evoke such a wonderful event. According to the Jane’s Walk official website, the 2013 walks occurred in over 100 cities – 800 walks in total – from over 22 countries. Marvelous indeed!

And now perhaps more than ever, in our age of virtual socializing, it is imperative for us all to get outside and meet our neighbors and to engage in conversations face-to-face, which is precisely the opportunity that Jane’s Walks provides. The book Jane’s Walk Annual: Volume One was created in much this same spirit over this past Holiday season.  Available online via Blurb, Jane’s Walk features 34 of the cities that have participated over the past years, from three different continents – Asia, Europe, and North America. With the communities that participated alphabetized in the table of contents, the randomness of the cities form a wonderful global mosaic, with Guelph next to Guadalajara, Calcutta next to Calgary, and Mexico City next to Montreal.

Vancouver is represented by two contrasting walks in the book – one looking at the natural world overlaid by an artificial one (and coincidentally passing along Wreck Beach on the way), while the other walk is focused on the early vestiges of downtown Vancouver’s settlement through the street grid of the downtown business district. This final walk also serves to illustrate the spirit of Jane, in that it speaks to Vancouver’s rising up against the Gastown 200 project—a project in which bulldozers threatened to demolish parts of Gastown, Chinatown, and Strathcona in the 1960’s, echoing Jane’s historic protest against the freeway that Robert Moses had planned to go through Greenwich Village a few years earlier.

As Denise Pinto, Director of Jane’s Walk points out in the book’s introduction: “Our global event is a story, too. One that has the potential to show how our cities are alike and to prompt the exchange of good ideas. This book is a journey through those ideas in a format that allows us to bridge extraordinary geographies.” One could add also that these stories are being told in a myriad of languages: English, French, Spanish, Portuguese, Slovenian, Swedish, Finnish, Mandarin, German, and Hebrew.

Jane’s Walk is then the inverse of the Tower of Babel, as it has enabled many voices in many languages to speak all at once, and in the space of one weekend, on the common theme of how to live in the modern city. It is a conversation we absolutely need to be having right now as the majority of our global populations shift from the countryside to the city, from the rural to the urban landscape.

Most remarkable about Jane’s Walks, and often forgotten, is that it is a totally volunteer-based enterprise, with all 800 tour leaders having given their own time to give the walks. Each walk is distinct, reflecting the unique education and cause of each tour leader, whether championing the local OCP, or simply celebrating a unique neighbourhood’s heritage. There is no methodology for the walks, and at any time people are able to sign-up and volunteer a walk of their own on the website.

Jane’s Walk Annual: Volume One likewise is modest for this reason – with less than 100 pages and in a tight 6” x 6” format, it still packs a punch with its numerous colour photos of the walks, along with the short and intimate descriptions of them. Proceeds for the book will go partially to the creation of the next book, as well as to the Tides Canada Initiatives Society, a registered charity.

Spacing has featured pieces on Jane’s Walk on two occasions before, one from the vantage point of the tour-goer and the other from the point of view of the tour leader. With May just around the corner, now is the time to decide whether you will put on your walking shoes to join your neighbours for a leisurely stroll, or if you yourself will take the helm and guide a handful of folks down memory lane. With Jane’s Walk turning six-years-old this May, come out and help to celebrate, and get a breath of fresh air while you’re at it! Surely we can take a short break from our Netflix and TED talks for an hour or two – we might even learn something about each other and ourselves that doesn’t start with a hashtag.

As such, Jane must have the final word here, as she noted speaking about the proliferation of the automobile in 1961 in her The Death and Life of Great American Cities:

“There is nothing economically or socially inevitable about either the decay of old cities or the fresh-minted decadence of the new unurban urbanization. On the contrary, no other aspect of our economy and society has been more purposefully manipulated for a full quarter century to achieve precisely what we are getting. Extraordinary governmental financial incentives have been required to achieve this degree of monotony, sterility, and vulgarity. Decades of preaching, writing, and exhorting by experts have gone into convincing us and our legislators that mush like this must be good for us, as long as it comes bedded with grass. It may be that we have become so feckless as a people that we no longer care how things work, but what kind of quick, easy outer impression they give. If so there is little hope for our cities or probably for much else in our society. But I do not think this is so.”

You can buy Jane’s Walk: Volume One through Blurb

For more information on Jane’s Walk, visit their website.
*