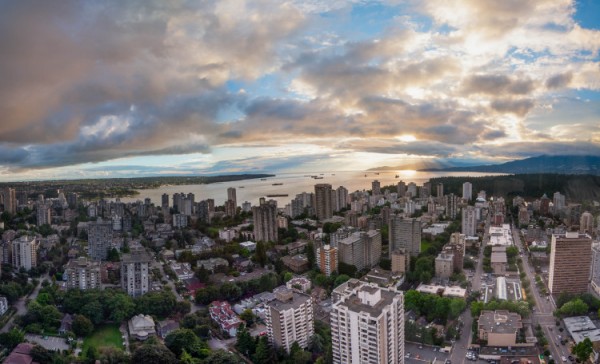 Any change, even a change for the better, is always accompanied by drawbacks and discomforts. – Arnold Bennett

It’s one of the most densely populated neighborhoods in Western Canada, comprising 35% of Downtown Vancouver’s peninsula, and with the City under significant development pressure, its existing residential and commercial stock is undergoing a substantial turnover. The concern: does this come at the cost of neighborhood character as change brings new height and density increases to the community?

As a resident since the 2010 Olympics, I’ve witnessed this eclectic community transform, drawing an increasing number of visitors to its highly desirable amenities. The lingering scent of Olympia’s greek food, peaceful sounds of chirping birds, and Denman Street intersection road rage from “over-walkability”, are all atmospheric staples. Nowadays, the sounds of excavators and dumptrucks, mainstream commercial establishments such as Burger King and C-Lovers taking over beloved local shops, and multiple re-zoning permits, makes one curious as to what’s in store for this developing urban landscape.

The West End neighborhood was officially established in 1969, and is a 204 hectare area bounded by Georgia Street to the North, Denman Street to the West, and Burrard Street to the East. The population is approximately 44,543 (Census 2011), with the majority (48%) in the 20-39 age group, at an average of 218 persons occupying each hectare.

Mid-rise and high-rise condominiums make up the majority of housing, with 63% (20,000 units) being purpose-built market rentals which is over 18% of the City’s total rental stock. Since the 1980s, dwelling sizes have averaged over 1,000 square feet, and typical rental and vacancy rates for the West End/Stanley Park proper are around $1,239 and 0.8% respectively (CMHC Oct. 2013). There are heritage houses that still remain, grouped mainly along Broughton, Barclay, Nicola, and Bute street, as well as landmark buildings like the vine covered Sylvia Hotel overlooking English Bay on Gilford St.

What makes the West End a highly livable community is its walkability and the preservation of nature. The green, leafy character remains intact, as evident with continuous tree canopies down virtually every street. With the various deciduous trees strewn along walkways and around buildings, shade is provided during the summer, and sunlight penetration during the winter. Included in the City of Vancouver’s Greenest City 2020 Action Plan is the planting of 150,000 more trees.

Traffic calming devices such as traffic circles, mini-parks, and diverters, route travellers accordingly, with the downside being high congestion on connecting streets such as Denman. Laneways in the West End are wider than normal at 33 feet compared to the City’s typical 20 feet. They serve as secondary walking routes.

Given all the nearby amenities it is no surprise that walking is the preferred way for locals to get around. This was particularly evident in the City’s 2008 pedestrian study, where it was found that Robson Street ranked among the highest in pedestrian volume. In August 2013, rush hour regulations were removed from Robson, Davie and west side of Denman, to assist local business and improve accessibility.

So what’s in store for the West End’s future? The Community Plan and Community Profile provide us some interesting insight, predominantly based on the following principles:

Principle 2  Support a range of affordable housing options to meet the diverse needs of the community.

Principle 4  Enhance culture, heritage and creativity in the city.

Principle 5  Provide and support a range of sustainable transportation options.

The key implementation tool is the Zoning and Development Bylaw. Following the trend of laneway housing, strategies are in place to allow low-rise infill development in the centre of the neighborhood, encourage larger outdoor residential balconies and decks, while the ‘fringe areas’ will see taller structures. Since 2006, these fringe areas have already seen completions of the 62-storey Shangri-la in 2008, and the 42-storey Patina in 2011, with the up-and-coming Trump Tower Vancouver on the northern side of Georgia Street.

In order to maintain Vancouver’s iconic skyline, and in fact make it more ‘dome-shaped’, floor space ratio (FSR) stipulations are essential. The FSR formula is a measurement of total covered area on all floors of a building in relation to the plot of land, ensuring development adheres to maintaining prevailing view corridors, etc. The highest FSR is found along Burrard Street, as well as the Georgia-Alberni corridor. The next highest overall FSR is west of Denman and English-Bay/Beach Avenue, with the lowest along Davie Street, Lower Robson, and Nelson Slopes.

The Robson, Davie, and Denman villages are to be enhanced, strengthening their unique identities and character. The communities will see widened and improved sidewalks, decorative lighting, landscaping, public art, and spaces for gathering.

Here are some of the latest changes to the West End neighborhood:

Espresso Bar and Art/Design based retail.

Boasting a huge southeast-facing patio, and just blocks away from English Bay.

Landscaping following the City’s initiative of improved access to art in public places.

Affixed metal seating throughout various parts of the neighborhood, encouraging a social atmosphere.

Search homes for sale in the West End, or read about the latest real estate developments, neighborhood, and lifestyle news by visiting the Resider Blog.