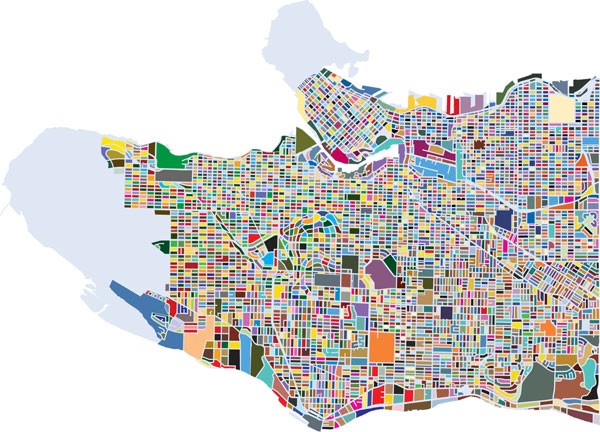 This has been a long time coming. After the creation and publication of the Vancouver Neighbourhood Puzzle, here is the complete Vancouver coloured block map. As mentioned in past posts, the creation of this map was an exploration in how best to graphically compare the block forms and geometry within Vancouver, versus the typical focus on streets that most figure-ground maps tend to have.

This led to colouring each block a different hue and, since each hue as a different value (relative lightness and/or darkness), they tend to emphasize their geometries more readily than the typical block/street bias of a standard black-and-white figure-ground map—something one can readily see by looking at the larger version. Not only is the result playful and visually striking, but also more informative! One can’t ask for much more in a map.

Consequently, Mike Jackson over at Grubwear—who is very interested in creating apparel that speaks to local Vancouver culture—took notice and people can now purchase T-shirts with this graphic on it, as well as the Vancouver Neighbourhood Puzzle. So, if you are in the area of Kingsway and Fraser, be sure to drop in and take a look.

In the meantime, be sure to open up the larger version of the map and look around.  This city is filled with beautiful block patterns!