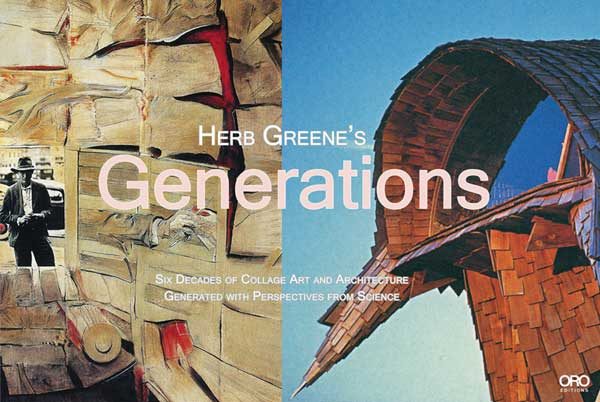 Herb Greene is an American architect, who studied under the Bruce Goff—a popular figure known for his ‘organic’ and unusual designs. Continuing the ethos of his mentor, Greene is best known for several iconic residential buildings that served as early example of conscious green design, including works such as the avian Prairie House. He has also published several books that deal with a variety of topics such as the power of images on our perception and sense of well-being, as well as the impact of building design on community formation.

In his latest publication—Generations: Six Decades of Art-Making by Herb Greene—Greene shares the results of his six-decade-long research on the interface of art history, philosophy, cognitive research, neuroscience and the philosophical views of Alfred North Whitehead. This beautifully illustrated coffee table book is an interdisciplinary approach to the multifaceted realm of architecture as art and science.

In the first Part, Origins, Greene describes the motivation behind creating this book. It was as an alumnus of the University of Oklahoma that he first met his mentor and professor Bruce Goff and initially encountered the philosophy of Alfred North Whitehead. With this in mind, Generations seeks to unveil the way we perceive things in our everyday lives and their connection to our past memories. Our awareness of our surroundings, buildings and photographs affect our perception, which is unique to every individual.

This notion is best illustrated in his collages within which he transforms Vermeer’s paintings through his own interpretation. For example, in the book, Greene examines the Artist’s 17th-century painting ‘Woman Holding a Balance‘ and discovers a shadow of a hand resting on the female model’s headscarf. To him, this symbolizes comfort and a god-like protection, which he incorporates in his painting “Vermeer’s Shadow Hand #2“.  He, thus, reproduces the narrative, by highlighting the subtle hint on the woman’s head, through the drawing of an actual hand. The good-like protective gesture is emphasized through the painted image of a little girl hugging a lamb.

In Part Two, Subjects and Themes, Greene explores major events in human history such as Slavery, the Holocaust or the Vietnam War and how we perceive Gender and emotions that are connected to the perceptive thought of females and that of males. As Greene explains “When we react to surprisingly powerful images we can investigate the patterns of their cause.” (pg. 78)

His last Part—Armatures—depicts his drawings of buildings and places, often times shown through a birds-eye view. In here he attempts to engage the reader with the idea on how the history and culture of a region has been shaped throughout time and how our human mind connects each of these epochs with symbols and signs.

This is best highlighted by his black and white Pencil and Ink Mylar “Armature Detail Drawing” seen below. The drawing is spread on two pages, divided in three horizontal lines similar to the style of ancient Greek bas-reliefs. Each line depicts images such as that of Aristotle or Dante, Middle Eastern Calligraphy, Greek Columns or pre-Columbian architecture that each are associated with a different epoch in history.

Greene’s Generations is a testament to his multifaceted ability as an architect and artist to eloquently combine the realms of several disciplines into one comprehensive body of work. Even though the work in this book is highly conceptualized and backed up by philosophical views of intellectuals such as Gertrude Stein, George Lakoff and Mark Johnson it’s a worthwhile read. One can delve deeply into the theoretical aspects of this book, or just enjoy the beauty of the collages, photographs and paintings.

With this in mind, Generations: Six Decades of Art-Making by Herb Greene is certainly a must for any enthusiast of architecture, history and art.