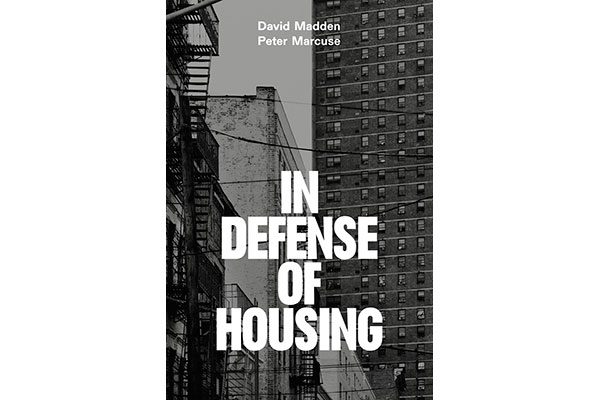 Everyone needs housing. But not everyone can afford it. If you’re willing to call that a crisis, there’s a housing crisis in every major city in the world. In In Defense of Housing, sociologist David Madden and urban planner Peter Marcuse explain why this has happened, and make it clear that progress requires us to start doing things very differently.

For Madden and Marcuse, the commodification of housing is a (if not the) root cause of the crisis. It elevates housing’s exchange value above its use value, making it less conceived of as dwelling space/shelter and more as something to invest in/make money off of. This is hugely problematic, if universal access is a concern, because commodification results in housing being distributed not according to need but by ability to pay. The result being that some are able to achieve access to a relative abundance of space/shelter in the form of privately-owned housing, and others to little or none.

The consumer side of a commodified housing system is homeownership. And Madden and Marcuse go on to question the commonly assumed inherent good in it. They make the point that, in the eighteenth century homeownership emerged as a way to “ensur[e] obedience and submission to government.” And they argue that today it leads to ‘political quietism’ because it “restricts household members’ opportunities to engage in other activities, as well as their desires to do so, especially their willingness to participate in collective action that might involve social conflict.” They also argue that it is ‘system conserving’ because it “can be used to present the interests of individual households as aligned with the interests of the real estate industry,” “facilitates political manipulation through the threat of falling property values,” “reduces the demand for state action, as rising house prices are seen as compensation for insufficient social services,” and as a whole, “gives homeowners an economic stake in maintaining scarcity and sustaining the housing crisis” while “supporting political parties that will do what they can to keep prices high.” According to Madden and Marcuse, “in unstable times, ownership remains the best tool for generating support for an unequal system.”

Madden and Marcuse concede that some studies suggest ownership is tied to improved measures of physical and mental health; however, they cite others which suggest that, rather than ownership, wealth—generally a prerequisite to ownership—is actually what makes people feel more secure. All in all, whether owning or renting is better for wellbeing depends largely on context: “The most important attributes of the tenure relationship are in fact more affected by the characteristics of the occupant and of the society in which ownership occurs,” write Madden and Marcuse. For example, “a solid lease with strong legal protections can easily provide a tenant with more security and access control than an owner might receive from a deed subject to a heavy mortgage under many conditions.” (I should note that the authors also mention a broader effect of ownership, citing research that suggests per capita homeownership expands at the expense of social welfare.)

To me the most insidious aspect of homeownership is that it’s (publicly) funded (directly and indirectly) so generously: “All of the federal money spent on public housing and other direct subsidies for working-class and poor households pales in comparison to the money spent subsidizing wealthy and middle-class homeowners,” write Madden and Marcuse, who, it should be noted, are referring to the United States. It would be a lie, however, to suggest things are different in Canada; here as well, “spending programs and tax expenditure provisions massively favour private homeowners.”

Commodification and private ownership are at the core of the ‘structural logic’ (how Madden and Marcuse would term it) of housing systems across the world. If the goal of a housing system is to ensure everyone has access to housing, Madden and Marcuse contend that an alternative logic, i.e., de-commodified development models, must be prioritized—because achieving housing for all under current conditions is impossible.

Solutions then, should not include ‘efficiency reforms’ (which make what is already being done more efficient) or ‘liberal reforms’ (which ameliorate what’s undesirable), but ‘transformative demands’ (which address systemic causes and are ‘system-challenging’). Solutions should include (1) de-commodifying housing, e.g., via rent controls, secure tenancies, and limits on speculation, (2) expanding and improving public housing, to ensure housing can be made accessible to anyone in need, (3) supporting experimentation in construction and management, e.g., with new building techniques and forms of tenure, (4) democratizing housing management and making it more community-based, and (5) broadening and globalizing the housing movement, among others.

All of the above can be achieved via government action. In Canada, our housing system is regulated and facilitated by the policies of the politicians/political parties we’ve elected. If we have the resources and technical know-how to house everyone (and I think we do) all that’s missing is the political will to do things differently, likely preceded by popular mobilization. The final point Madden and Marcuse make (spoiler alert!) is that it’s up to us to demand housing is distributed fairly—to ensure we being working towards achieving “a truly humane housing system, where housing is not real estate but is, instead, home.”

For those who want a relatively brief overview of the root causes of our housing crisis and what needs to be done to end it, In Defense of Housing is a must-read.

For more information on In Defence of Housing, visit the Verso website.

William Dunn lives and works in Vancouver, BC.