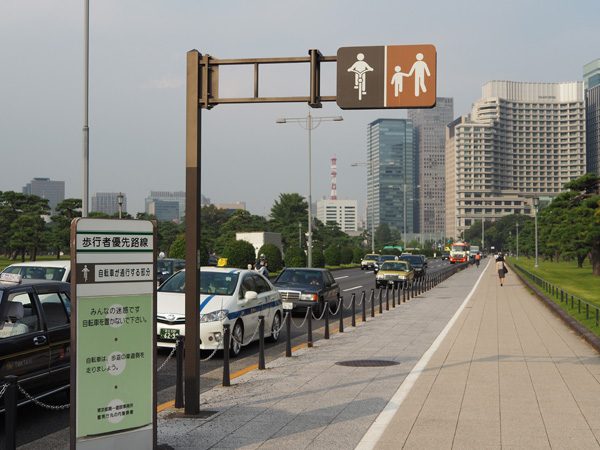 When we look for examples of great cycling cities or countries, we often look to Denmark or the Netherlands. For a good reason, of course—these places have built impressive cycling cultures and have made great strides towards normalizing two-wheeled movement.  One place we almost never hear about is Japan. However, cycling represents, 14% of all trips in Tokyo, which is an impressive number even in Scandinavian terms. What’s even more impressive is that the 14% mode share appears to have blossomed passively. 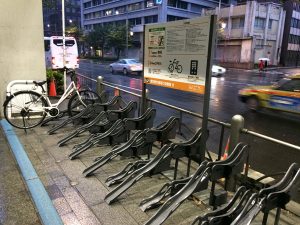 Cycling has been slowly on the rise in Japan, for some time. The country is well known for compact development and space constraints. In the resulting urban form, it is easy for people to walk, cycle and take transit for most daily trips. What is different about the growth in cycling in a place like Tokyo vs Copenhagen is that there are no vast networks of cycle tracks. Quite the opposite, there are almost no cycling facilities whatsoever.  The only reliable type of cycling infrastructure found on many city streets is bicycle parking.  Many people have seen or heard of the automated underground bike parking facilities, but these are rare.  Instead, bike parkades, street parking and even pay-street parking line many streets.

Cycling in Japan is uniquely practical.  Many trips are less than 2km, and even the bicycles themselves are uniquely suited to navigating their narrow streets and compact spaces.  Mini Velos are common bikes with 24-inch wheels made to fit just about anywhere, and mamachari (mom’s bikes) are specially kitted cargo bikes that sport a combination of children’s seats, and baskets for moving around a young family.  Many mamachari also have an electric assist and low centres of gravity which makes them easier to manage when loaded. 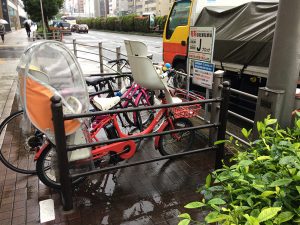 So, Japan has many people riding different bikes, and it has ample bike parking, but where do all these people ride? This is one of the downsides of cycling in Japan. Cycle tracks, bike lanes and other types of cycles routes are near nonexistent. Despite Tokyo’s gigantic size, it only has about 120 km of bike lanes (Vancouver has over 400km of on and off-street facilities). Many people in Japan cycle on sidewalks despite recent attempts to make it illegal. However, when given a choice between the street, where there are no facilities, and the sidewalk, where rules are rarely enforced and exist in somewhat of a grey area, who could blame people for riding on sidewalks? 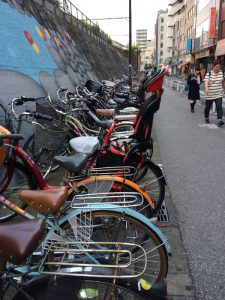 As cycling grows, the sidewalks are under more pressure and see more accidents. In Japan, traffic accidents involving cyclists are mostly with pedestrians. Most of these are low speed, and only “slight” injuries are reported, but it is mostly the cyclists who are at fault. This leads to a confusing legal landscape where, although it is legal to ride on the sidewalk, cyclists are often at fault for accidents there.

Japan provides an exciting case study where it has already achieved admirable mode share without building cycling networks. However, due to rising pressures on sidewalks resulting from the growth in cycling numbers and changing forms of cyclists, there is more demand for more sophisticated facilities. In Japan, there is no discussion of “build it, and they will come”, because “they” are already there.