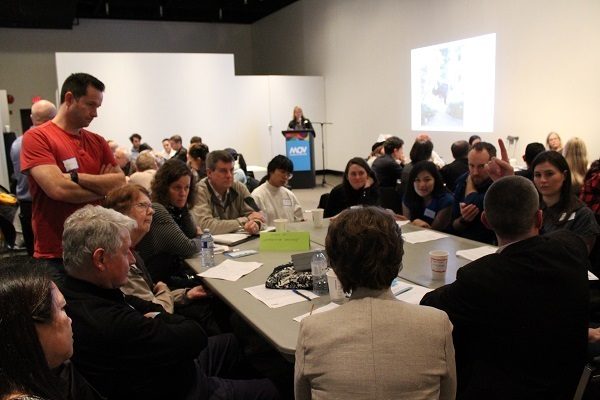 On February 1st the RAIC Metro Vancouver Chapter hosted the second installment of this year’s MOV Built City Speaker Series, titled ‘A Deeper Dive into Family Friendly Affordable Housing.’ The sold out event was a follow up to the first event held in late 2017, which featured a panel of well known planners, architects, and several not for profit housing groups. For this latest installment, SFU City Program founder Gordon Price delivered a brief keynote before the 60 + people present broke into working groups.

With a copy of the 1992 City of Vancouver planning guidelines for ‘High Density Housing for Families with Children’ in his hand, Gordon gave a spirited exposition of where we have come from, and how far we have strayed from the garden path. Over the course of his fifteen minute keynote, it became evident that the solutions to our current dilemma were already sorted out twenty-five years ago, for the most part.

Moderated by thought leader Gloria Venczel, MCIP of the RAIC Metro Vancouver Chapter, the room was broken into working groups, with local architect and planner Graham McGarva providing some insight at his table, discussing the importance of pedestrian-oriented communities. Graham also touched upon what is currently going on with the expiring leasehold properties adjacent to Granville Island, where a significant population of both renters and owners are renegotiating their right to live affordably in that area.

Close by at the next table, Robert Brown of Catalyst Community Development Society led a discussion about what it means to be a not-for-profit real estate developer. The dialogue included a discussion of how much typical developers of multi-family homes are truly making on their investment versus what a not-for-profit housing association is willing to leave on the table.

Five tables in all, along with Colleen Hardwick of PlaceSpeak, Darren Kitchen of the Cooperative Housing Federation, UBC graduate student Rachel Selinger and Danny Oleksiuk of Abundant Housing rounding out the room, providing the opportunity for engaging dialogue on the subject. The people that turned out for the event included prominent architects, planners, and concerned citizens, providing a forum for two-way discussion, an opportunity to go deep into affordable housing and the question of where young people and their families are going to live in our region.

There was no doubt in the room that we are in a crisis—one that has been coming for some time. We are in this state because of a failure of leadership: we know what needs to be done but no one is willing to do something about it, including all three levels of government, alongside the real estate and development industries. The grassroots organizations at the tables at this event clearly demonstrates that, if the powers that be are not willing to step up, the people will do it without them. And with a civic election coming up for Metro Vancouver, it goes without saying the people are about to vote with their feet.

This sold out event (along with other similar events going on around Vancouver) is a strong indication that architects and planners are looking to get going with the solution, whether that is designing more missing middle housing or rezoning RS-1 sites to provide more density in our inner city suburbs. Architects are not strangers to crisis—having weathered the storm of leaky condos twenty years ago, once we have solved the affordable housing crisis there will most certainly be another one, perhaps requiring more resilient building stock for a hostile climate.

The RAIC Metro Vancouver Chapter represents members of the Royal Architectural Institute of Canada currently residing in the Metro Vancouver region, and was formed to be a voice for architects, providing advocacy for the profession in Greater Vancouver and BC. In addition to the Built City Speaker Series, the Chapter regularly hosts events with School of Architecture and Landscape Architecture (SALA) at UBC, and has more recently curated a successful art-by-architects auction and fundraiser at the AIBC Architecture Centre Gallery. The RAIC Chapter will also be a sponsor of this year’s Vancouver Design Week, and looks forward to meeting new members at its monthly lunchtime meetings in downtown Vancouver.

The Chapter is a part of the RAIC national organization and shares in its common goals for the development and recognition of architectural excellence. Stay tuned for information on the Metro Vancouver Chapter’s third and final installment of the 2017-18 Built City Speaker Series at MOV, whose subject will also be on affordable housing, scheduled for April 7th.

For more information, go to the Chapter website here.