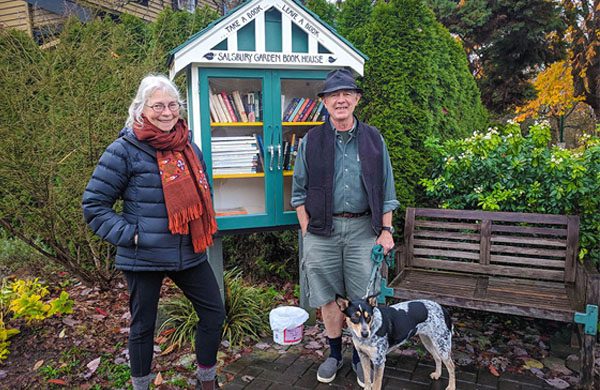 Penny Street and Stephen Holmes keep a close eye on the well-used bench and book exchange they set up on the corner of their block. Photo by Christopher Cheung.

On the southwest corner of Salsbury and Napier Streets, a block from Vancouver’s Commercial Drive, Penny Street and Stephen Holmes set up a bench and a bookshelf.

“We had a grand opening with the Balkan Schmalkan band,” remembered Street, standing on the corner one Tuesday afternoon. “All the neighbours came out and all the kids got to pull the ribbon off and unveil it.”

“It’ll be four years ago next March,” reflected Holmes.

“Before that, I had been hassling him for two years to build it,” responded Street.

These neighbourhood embellishments are often called parkettes or mini-parks. The City of Vancouver manages its own parkettes, but this one on Salsbury is different.

Because it was established bottom-up by locals, city planners and designers would call it an act of “urban intervention.”

Holmes and Street have lived on this block for 20 years. They were inspired to install a book exchange of their own after seeing one nearby on Charles and Lakewood Streets.

That exchange sits on a little peninsula that juts out into the street as a traffic-calming measure — no cars, bikes only.

Before they built the Salsbury parkette there was a community garden on the corner, made up of the yards of two adjacent houses (BC Mills “prefabs” from 1907).

“Everybody in the neighbourhood used it,” Street said of the garden, “for picnics and sometimes sleep outs. There were also a few homeless people that would sleep there.”

The two properties were eventually redeveloped and the garden removed. However, the couple noticed something unusual on the corner: a small bit of city-owned property known as an easement. It seemed like the perfect place for their book exchange.

“We never asked permission to put it in,” said Street. “We thought it’d be easier to apologize after.”

Holmes, a retired carpenter, built the bookshelf — “make sure to use Plexiglas instead of glass for safety,” he advised — and the couple moved a spare bench from their backyard to the corner. They named it the “Salsbury Garden Book House” to “keep the memory alive of that community space.”

The results, Holmes said, were “very satisfying.” Many people who used it were on their way home from the Drive, musicians who stopped to play a tune or seniors taking a breather at the bench after a walk uphill.

The book exchange has its own kids’ section, and grandparents sit with their grandkids to enjoy a book. Like at all good benches, Holmes has also noticed some “romantic interludes.”

It’s a place for meetings of many kinds, Street said. And homeless people have returned to sleep there, a throwback to the days when the spot was a community garden.

When I chatted with Street and Holmes at the corner, a jogger stopped and leaned one leg on a rock that’s part of the landscaping to rest. He said hi.

Bruce Macdonald, a heritage advocate who lives in the area, thinks of the parkette as a throwback to the neighbourhood’s “slower days before the automobile, when people relaxed on their front porches in the evening.”

The neighbourliness of the Salsbury corner sounds picture-perfect, but before you go sticking a bookshelf in your own neighbourhood, you need to know about the kinds of people who live near you and their needs.

“Spaces are activated according to the patterns of the community,” said Paty Rios, a researcher who specializes in social wellbeing with urban planning and design group Happy City.

“You have to make sure you understand the demographics. It’s about more than just coming up with a great idea. So if there’s a senior population, one of the things that’s always going to be a priority is seats.”

Commercial Drive has always been known for arts and counterculture, so it’s no surprise that the Salsbury book exchange does well. Also, Vancouver is an expensive city, and two Toronto researchers found last year that little lending libraries are more common in wealthier neighbourhoods.

In a different area, a book exchange might not be the social urban intervention the neighbourhood needs. Instead, it might be a new place to play a sport or a game like chess.

In Vancouver’s hip Mount Pleasant, someone did some guerrilla gardening and planted marijuana plants in traffic circles, with much debate about whether it was a blight or boon.

Guerrilla gardening is also not uncommon in dense Hong Kong, where gardeners have grown everything from sweet potatoes to mango trees.

But what should city governments do when they see unexpected interventions pop up that might be bending the rules?

“That’s a tricky question,” said Rios. “When neighbours organize collectively to do something for themselves, it should generate a red light to the city about what the community needs — as long as it’s not affecting others’ lives in a negative way.”

Urban inventions are rarer in suburbia, because there’s less foot traffic and homes are more spaced out, said Rios. That’s not to say there’s no sense of community in suburbs, but that it tends to be more formal and intentional than informal and serendipitous.

At the Salsbury corner, Street and Holmes are constantly surprised by what they see.

“A month later, it showed up again! So OK, this time I’m going to make sure you can’t take it away. I didn’t want to run screws through it or anything because the wood was pretty soft. So I put a block in there to jam it in. Two days later, it was gone again.”

Whatever the urban intervention, it will require consistent care. When people who smoked on the bench threw their butts on the ground, the couple added a bucket to the corner, which solved the problem.

And visitors can be greedy. “Sometimes when people put a lot of good books in there, we’ve noticed over the last few years that somebody else takes all of the good ones!” said Street. She worries that someone is taking them to sell to Commercial Drive’s many used bookstores.

Street has a stamp with “Not for resale: This book comes from a community book box” on it, devised by the neighbours who watch over a nearby box. She doesn’t like to use it on the shelf’s books, but she says doing so is better than someone reselling them.

Sometimes, the problem can be that people are too generous. Last week, somebody left a pile of architecture books and magazines on the bench, large, glossy volumes, some of them in Italian. Street had to take them home and add them to the shelf in small batches.

The parkette’s four-year anniversary is approaching, but it still has a lot to teach the neighbourhood about itself, though there’s no doubt about how well it’s already fit in.

“Lots of people help maintain it. They’ll come by and straighten things out,” said Holmes. “They do it because they own part of it.”

Christopher Cheung is a reporter at The Tyee where this story originally appeared.