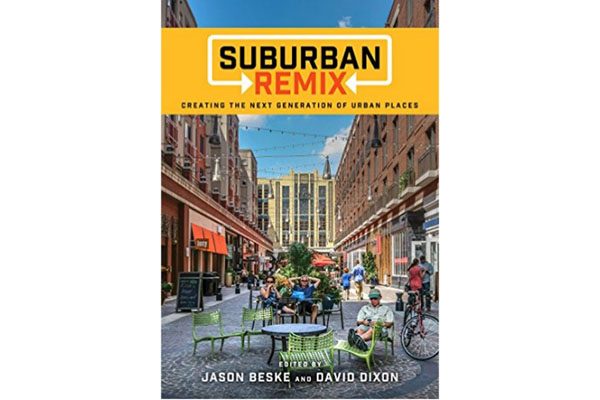 According to the 2017 American Housing Survey, the majority of Americans live in the suburbs. Yet, most architectural and urban books focus on cities and larger metropoles. Suburban Remix: Creating the Next Generation of Urban Places is a thoughtful tribute to the much neglected subject of suburbia, as it takes the development, evolution and current state of North American suburbs under examination. In doing so, this publication offers a fresh perspective on the changing image of suburbs—their challenges and advantages—across time.

A compilation of 17 international experts working in academia, Suburban Remix brings together the knowledge of people within the real estate market, think thanks, urban land use and policy development on subjects such as suburban markets, walkability and placemaking in suburbs within the U.S. and Ontario, Canada. The book consists of 15 chapters that are subdivided into four consecutive parts that take the triple bottom line approach (social, economic, environment) and focus on subjects such as sustainability, affordability and the role of the arts in a social and economic context.

In his Introduction, co-editor David Dixon the book as being about an “optimistic future in which suburbs can make a conscious choice, followed by concrete action, to become as current and central to our society today as they were for much of the latter half of the twentieth century”. He starts with the premise that moving to the suburbs used to be a choice exclusive to white, middle-class nuclear families. After WWII, only those who could afford it moved to the suburbs to live in a detached single-family house, with a front and backyard. This is where the term NIMBY  (Not-In-My-Backyard) derives from, which is a distinct characteristic of class distinctions between low-income and middle-class. However, in the 21st-century, the push towards more dense, walkable and accessible neighbourhoods shifted the NIMBY attitude into YIMBY (Yes-In-My-Backyard).

The changing image and demographics of suburban neighbourhoods is the focus of the first part of the book, Setting the Stage“, where Christopher Leinberger concludes that, in the turn of the 21st century, development shifted and “suburbs became home to the largest and fastest-growing poor population in the nation.” This observation is also reflected statistically as “…the number of poor residents in suburbs outstrips the number in big cities by 3.4 million”.

Part II Suburban Markets and III, Case studies for walkable urban places, are dedicated to the social and economic attractiveness of suburbs. Pieces by Sarah Woodworth—Chapter 4, Office—and Stewart Schwartz—Chapter 6, Blueprint for a Better Region: Washington DC—examine factors that lead to the attractiveness of suburbs and how they draw talent and innovation. Both chapters are particularly helpful for employers and companies who are seeking to offer their employees a healthy and attractive work-life balance.

Schwartz and Woodworth conclude that factors such as access to public transportation, walkable distances from home to work, bike-friendly lanes, as well as mixed-use buildings define urban vibrant centres. Moreover, architectural elements such as adaptively reused old buildings with high ceilings, open space and floor-to-ceiling windows are considered “cool space” that is particularly “attractive to the TAMI (Technology, Advertising, Media, and Information) industries”. The design of green buildings that align well with sustainable and eco-friendly lifestyles, are also considered economically sensible while minimizing harmful effects on human health and the environment.

Even though the focus on the case studies includes within the book are predominantly on American, Chapter 10 North York Centre deals with suburbs in the Greater Toronto Area (GTA), Canada. The authors Harold Madi and Simon O’Byrne argue that “suburbs across Canada are growing denser by the day” because of the “noticeable boost to the success of downtowns and newer walkable urban centres.”

For the Canadian reader, this part of the book will be particularly appreciated as it recognizes the difference between the creation of suburbs in the US and  Canada. Interestingly, Canadian’s emigration from the cities is often due to lack of affordability, as “increasingly, working- and middle-class families cannot afford to live in the centre of Canada’s big cities.” Affordability and walkability are pull-and-push factors for Canadians who move to the suburbs.

Chapter 13—From Village to City—focuses on walkability: something that has been a challenge since the origins of suburbs. Downtown Bellevue is a thematized as an example of a city that deemed pedestrians suspect and stopped by police who would “inquire if they needed help or make sure they weren’t criminals or vagrants”. This auto-centric focus manifested itself in wider streets, set back buildings, increased parking lots, freeways and low-rise buildings. However, Bellevue underwent a transformation into a walkable, bike-friendly city with a downtown centre that serves as a social hub for people to gather and socialize.

Ironically, accessibility and increased transit contribute to an increased desirability of suburbs and, as such, limit affordable housing options as demand for housing increases. As many people know, housing affordability has been a consistent challenge for cities globally, from San Francisco to London, Vancouver to Tokyo.

The fourth and final part of the book—Bringing It All Together—highlights the current state of the suburbs, with a particular focus on placemaking, the role of the arts in public places as well as building a more inclusive, heterogeneous places. With this in mind, it pays much attention to the social aspects of suburbs.

As cities are hubs for social connection and innovation it is often intangible qualities that shape the social dynamics. The arts have always been a booster for building more open, tolerant societies. Who Has The Right To Art?—the question of who is to decide what kind of art is displayed in the public—was touched upon recently in an article in Canadian Art. The role of the artists in economic development and aesthetic attractiveness of cities has also been examined and discussed in numerous publications. Scholars such as Loretta Lees, David Ley and Sharon Zukin have looked at the impact of artists and art in cities and their effects on the displacement of low-income households for the benefit of middle-class and affluent households. As such, the relationship between art in the urban context is a highly controversial one.

In chapter 14, Planning David Dixon highlights the advantages for suburbs to include art, particularly public art to enrich the public realm and foster interaction amongst all citizens. He argues that examples such as John Ewing’s Boston-area installation, Color Commons by New American Public Art and several art installations in Seattle (that invite people to talk about what residents in a large apartment building are tweeting about) are positive contributions for building an inclusive, just city. Moreover, he emphasizes that art “turns the traditional top-down model, by which a public entity or developer funds an installs street trees, lighting, or art, on its head” .

The role of public space and design for citizen’s well-being, a “Happy City” approach is shown in the examples of Virginia suburbs, Shirlington-Arlington and Reston as well as Rockville in Maryland in Chapter 15, Placemaking.” Both suburbs rebranded and redeveloped their public spaces, that include public plazas, fountains, parks and public art. All these elements serve the purpose to bring people together, add vibrancy but also a sense of belonging within the community.

Ultimately, Suburban Remix offers comprehensive insights around the many challenges and merits of North American suburbs in the 21st century. The diverse backgrounds of the contributors add a fresh perspective to solutions for contemporary suburban issues and, given the extent of our suburban landscapes, offer a solid direction for the future.

For more information on Suburban Remix: Creating the Next Generation of Urban Places, visit the Island Press website.