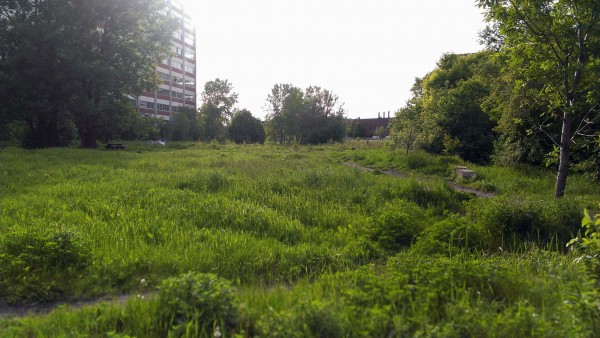 I should be thrilled.

The Champ des possibles, an overgrown lot in the Mile End, long ago abandoned by CP rail, has been officially preserved as a greenspace. What’s more, the Plateau borough has adopted an innovative new co-management plan, which directly involves a citizen group in maintaining and developing the public space.

Le Devoir is calling it an outright revolution in how public space can be co-managed in direct partnership with citizens.

Citizens fought hard to protect this beloved meadow, first from being transformed into a truck yard, then from encroaching development, and finally from becoming a highly managed park. From the beginning, it was the un-programmed nature of this place that local residents fell in love with, and that inspired it’s name, which means the Field of Possibilities. In a dense urban neighbourhood with the occasional pocket-playground, tall grasses, wildflowers and insects are rare; campfires and installation art are virtually unheard of.

After 5 years of negotiations, the borough struck a deal to co-manage the site with a non-profit organization called Les Amis du champ des possibles. Following a citizen-led consultation, the ACDP is focusing on preserving space for biodiversity, heritage, artistic intervention, recreation, education and scientific activity, as well as a participatory process.

“The idea of creating a park that is not a park, but a green space, took a lot of negotiation,” Ferrandez said, in The Gazette, adding that this is the first time in Montreal that a citizens’ group has been given responsibility for a site of this size.

I should be thrilled. But alas, I had the misfortune of tangling with this brand new co-management structure recently…

The Champ des possibles was one of the sites proposed for Walk the Region 2013 by author Nicolas Dickner, and one of the places that inspired our 2013 theme: places in transformation. After drawing up a route that passed through this point, we realized that it was the perfect location to camp after a 23-km hike from Pointe-aux-Trembles. I contacted the borough counsellor, Richard Ryan, to inquire about getting the permit and insurance that are required to temporarily occupy a public space (the same kind of permit that festivals obtain regularly each summer).

Mr Ryan responded that, since the site was co-managed with Les Amis du champ des possibles, I would have to run the idea by them. Great, I thought: Instead of dealing with city bureaucrats, I can send my proposal to engaged citizens!

I got in touch with several ACDP members by email and Facebook, to ask whether a group of about 20 people could camp in the field for one night, clearly specifying that we could obtain the necessary permits, and that we would clean up after ourselves and minimize our impact on the site. I didn’t receive a reply from ADCP, but several days later, Richard Ryan forwarded me a short response from the president of the organization:

But I WAS surprised. Perhaps had been naive, but after all, it’s called the Champs des possibles…

This was a sliver of abandoned industrial land that was protected because it had been appropriated by citizens who used it for creative purposes. Back in 2008, I lent a hand in – and reported on – the guerrilla gardening project that had helped bring the Champ des possibles into the spotlight. But now, with the site is officially protected, where is the space for flexible use?

I recontacted another ADCP member for more information. We had a nice conversation, but a few days later I received a second email saying that they could not approve our request to spend the night there because the site is too contaminated.

It’s true that the Champ des possibles is a brownfield that used to belong to CP, but is the site really so polluted that spending 12 hours there – mostly inside tents – would pose a health risk?

Or is it inevitable that protecting the site necessitates excluding some uses and users?

Either way, I’m sad to say, the Champ des possibles has lost a whole lot of it’s magic for me.