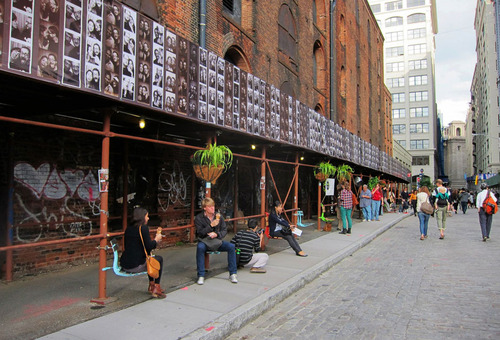 What if your local telephone booth was also an electric vehicle charging station?
Or construction scaffolding became a fun place to sit down and eat lunch?
Or a roadside billboard became a lush, air-cleaning bamboo garden?

All of these examples are part of a new exhibition launched this week by the Boston Society of Architects called Reprogramming the City: Opportunities for Urban Infrastructure. The show presents a global overview of ways in which the existing, traditional forms of infrastructure in cities around the world are being redesigned, repurposed, and reimagined to better serve citizens in the 21st century.

Curated by urban design director Scott Burnham, it showcases more than 40 examples of imaginative reuse and repurposing of urban infrastructure, from physical objects to the city’s most functional systems and surfaces. Cities represented include London, Amsterdam, Copenhagen, Hong Kong, and Boston.

According to Burnham, the exhibit explores a new paradigm of urban creativity and resourcefulness that treats the hardware of the city as a platform of opportunity. Infrastructure is not the end result of a previous creative process, but the beginning of a new one:

“The city holds a vast amount of untapped ability. The structures, surfaces, objects and systems that underpin its daily operations have the potential to do more, to perform an alternate function, or assume an entirely new role in the mechanism of the city,” said Burnham. “Reprogramming The Cityis an overview of ways in which our urban infrastructure is being re-imagined, re-purposed and re-invented to expand functionality, and in turn expand the functionality of the city itself.”

One of the projects included is Soft Walks from New York City, which was featured on the blog here back in January. Other featured projects demonstrate how around the world, people are finding more and better ways to use telephone booths, billboard signs, construction scaffolding, concrete stairwells, bus shelters and even parking meters.

Softwalks – Designed by Bland Hoke and Howard Chambers, Softwalks is a kit of parts including a chair, counter, light, and planter that, when attached to scaffolding structures, transform them into temporary assembled areas for public rest or play. The project was initially funded entirely by Kickstarter, a crowd-sourced funding platform. City Meter – Developed by Mayo Nissen and Scott Burnham in collaboration with the City of Boston, City Meter is an exploration into how parking meters can be repurposed to better serve all citizens of the city in which they are installed. The prototype contained in the exhibition prints out information about updates on repairs to local infrastructure problems. UTEC Water Billboard – Proposed by the University of Engineering and Technology (UTEC) in Lima, Peru, converts the region’s 98 percent relative humidity air into drinking water. The moist air is processed through a series of reverse-osmosis machines installed inside the billboard, along with an air filter, condenser, and carbon filter, generating an average of 25 gallons of water per day, which is kept in tanks at the top and comes out of a faucet located at the bottom of the billboard. Umeå Energi –The Swedish energy company, Umeå Energi, created a way to counter some of the effects of the dark winter months by replacing the existing lights in 30 of the city’s bus stops with phototherapy anti-SAD (Seasonal Affective Disorder) bulbs. Their “light therapy” initiative invites commuters to spend a few minutes facing the therapeutic lights while waiting for the bus to soak up the benefits of the sun they miss during the winter. “ The Cascade – Created by Edge Design Institute, a monolithic structure in Central Hong Kong was transformed from a public staircase into a communal seating area with gardening features, giving extra meaning to a neglected and overlooked, urban space. Goedzak – A “garbage” bag for items that are still useable. According to its inventors, Maarten Heijltjes & Simon Akkaya, the bag is a friendly way to offer products a second chance and stimulate sustainable behaviour:

Whether it’s that purple vase your sister-in-law got you, or that particular coffee machine (you know the one) that’s been lying in the basement for ages; everybody owns items that are no longer of value to them. Every now and then we throw out these items, while they still might be of value or useful to others. These items disappear in grey garbage bags and end up on trash piles. Goedzak offers these items a second chance. Goedzak stimulates people to dispose of their products in a more conscious and sustainable way. Goedzak can extend the products’ lifetime.