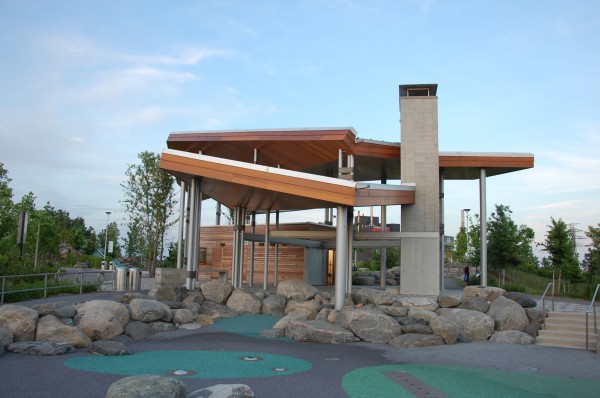 June is Parks and Recreation Month in Canada, and Spacing had chance to ask a few questions of landscape architect and The Cultural Landscape Foundation president Charles Birnbaum, after his special guest presentation to Inside the Planner’s Studio, a learning series hosted by Toronto’s planning division.

Birnbaum’s visit precedes a planned Toronto conference in May 2015, out of which planners hope to produce a white paper on best practices for the city’s landscapes.

Spacing: Many in Toronto would be surprised to hear your praise for our waterfront. What what grabbed you about the work already underway?

Birnbaum: During the presentation, I showed the Toronto waterfront in relation to Battery Park City [New York], and I wanted to show that because, when you look at the hand of the landscape architects, very rarely do you see really designing projects to such a high level of design, and working within a shared vocabulary. So, when you move effortlessly between a number of these projects, to me that’s just something that you see so rarely in terms of project work.

In the case of Michael Van Valkenburgh [who designed Corktown Common], for example, it wasn’t just the construction and the detailing, but this idea that you can have a landscape that embodies both picturesque and modern design principles, which are the foundation for the city, and doing it through a systems-based, state-of-the-art ecological approach.

I think the project is an exemplar, in terms of the work of a landscape architect today.

Spacing: Why is it important to “embrace the palimpsest,” to make use of the “layers” within a landscape?

Birnbaum: Most landscapes are palimpsests, especially when you’re dealing with a landscape that has a century of history.

With the New York Botanical Garden you’ll find gardens designed by the three premiere women landscape architects of the Country Place Era: Beatrix Farrand, Ellen Shipman, and Marian Coffin. That doesn’t exist in any other public garden in America, and so you have an opportunity there to make all of their works visible through that larger palimpsest. And that palimpsest, at the New York Botanical Garden, goes right up to the modern era. It includes the work of architect Ed Barnes and the work of Dan Kiley, you have Olmsted Sr., there’s a long, long list. Most landscapes are like that.

The thing about [Toronto’s] Sugar Beach which is so exciting is it’s a palimpsest not just for design, but it’s a palimpsest between a vernacular industrial landscape and, now, a landscape that is about pleasure and enjoyment. One might suggest that the industrial work is a folly in the viewshed, and that’s part of that layering.

One of the ways that you would begin to understand “the palimpsest” or the layers is to develop a series of what is called “period plans.” Those period plans, for example if it was a private residence, might be tied to different ownership periods of an estate. At a college campus, very often there are different periods when there are building campaigns. Depending on the amount of change and the number of years that we’re talking about during that span, you may have two , you may have ten different layers. 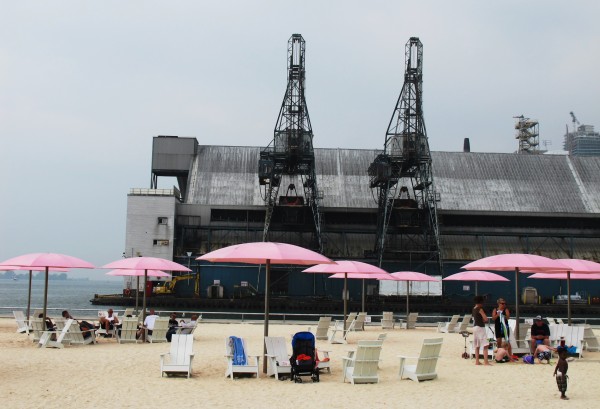 Spacing: We tend, as you pointed out, to bury our history here. What do we lose when we allow that to happen?

Birnbaum: One of the things that I often talk about, in terms of the work of landscape architects, is “publish or perish.” That we’ve seen time and time again that when people begin to write about this work, when the hand of the landscape architect is made visible, that a greater sense of stewardship often follows.

There’s a reason in the U.S. why there are more than two dozen books about Frederick Law Olmsted Sr. [who designed many historic parks in the U.S. and Canada, including New York’s Central Park], and it’s not accidental that one tenth of the national registered designations in America for landscape architecture are the work of the Olmsted firm – that’s 200 projects. So there’s a direct connection between writing about somebody, making the hand of the landscape architect visible, illustrating to people what the design intent was and is, and then often leading to designation, awareness, and better management practices.

Having said that, it doesn’t need to be a major book that’s hard-bound. The visibility of a landscape architect’s work can also be done through web – which is what we’re trying to do with the What’s Out There project.

A lot of the municipal parks here: my guess is, you go deeper, you’ll probably start to find out that there are multiple generations of people who’ve contributed to ongoing change in many of these parks and open spaces.

Spacing: What happens to a landscape when planning incorporates these ideas of continuity and contiguity?

Birnbaum: When people talk about sustainability in design, I think when you’re not throwing the baby out with the bathwater it’s an awfully good place to start.

So, in terms of the continuity and contiguity in [Toronto’s] waterfront, to me what was so exciting is that everything was unique enough to a design, but was able to then be part of this larger, shared landscape – that there was a common language.

In terms of the other aspect that I spoke about, the palimpsest: within a layered landscape, you can have continuity of expression, even though the landscape features, or component landscapes, may be from different eras.

The thing that’s worth looking at, especially with modern landscapes, is very often when they aren’t maintained, [there is] this desire to just create a wholesale removal. Think about University Avenue, for example, in terms of what happens there in the future. I would think there’s going to be tremendous pressure to turn that into something completely different, down the road, as opposed to working within the bone structure and those character-defining features that remain today, working within the historic design pallet. 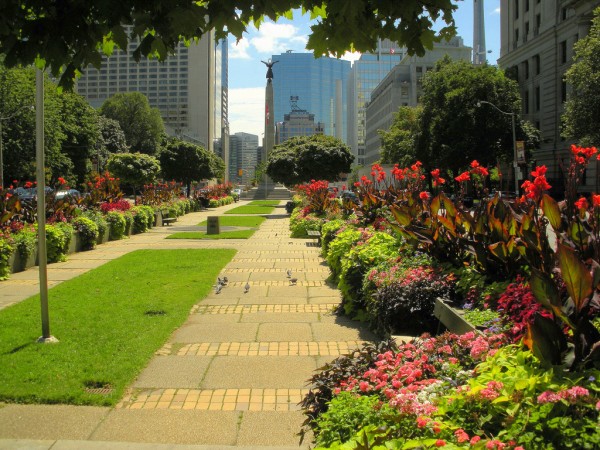 Greenery in the median on University Avenue by Tom Flemming via flickr, creative commons licence

Spacing: What are the impediments you find to making landscape architecture work for people?

Birnbaum: One of the things that the public often does not know is that, in terms of public parks and open spaces (this is incredibly well documented in the U.S.), between 70-80% of park users use parks for passive enjoyment. Strolling, biking, jogging, walking, Frisbee – not organized events. That’s a really big number, but those people may not be the most vocal people. And so, the question about “when is a park successful” really depends on the park, it depends on its scale, it depends on its carrying capacity.

I think the question starts to become, when you have these other things that are not flexible uses, how do you absorb those, how do they get accommodated? I mean, dog parks, for example: you’re not going to find a fenced dog park in Central Park. You have areas where they have a flag system where dogs can actually run off-leash, and those change – they’re not given-over to a permanency.

Personally I would say that we are successful when there is a continuity of use and expression that is compatible with the historic design intent.

For example, there’s a park in Baton Rouge, Louisiana that’s a nine-hole golf course. People want to get rid of the golf course – a designated landscape – and bring in all this stuff, all these new buildings, all these new uses. If hundreds of people come, or thousands of people come to those facilities, as opposed to a smaller number of golfers, does that mean that it’s been successful? Some people might say yes. For me, when you’re destroying a significant historic designed landscape, and you’re creating a land use – large or small – that’s not compatible, then I don’t think that’s a recipe for success.

Spacing: What do you mean when you talk about “plop and drop,” and what does that kind of design end up meaning (or not meaning) for people?

Birnbaum: Every landscape has a different carrying capacity.

I think it has to do with the heritage value, the significance of a design, and what we’re very interested in is issues of change and continuity. How do you actually move a landscape forward while still maintaining those character-defining visual and spatial relationships, and those significant built elements, as part of that overall planning?

One of the things that very often happens is there’s a limited amount of funds available for certain types of things like playgrounds, there’s pressure for new dog parks, and so very often what we see playing-out is that they just get put in open spaces. And the reality is that those open spaces are part of an overall design concept, and when you start to put things in them you change the design composition of a landscape.

It’s not to say that these landscapes can’t, and shouldn’t have these things, they often can accommodate them; the question is how, and where, and the only way to make those value judgments is by going through a thoughtful inventory and analysis to understand how that landscape has evolved. The challenge there is it takes time and money, and people often want an immediate impact.

Spacing: What do you hope is achieved at the May 2015 conference, and what will be the steps moving forward?

Birnbaum: There’s sort of a local goal, and a global goal.

The global goal is to take the projects that have been built here in the last number of years along the waterfront, and those that are associated with the Pan Am Games, and make a much larger global audience aware of the significance and the quality of these projects.

In terms of the local goals, one of the things that we want to do is make visible the current situation from a landscape architect’s perspective, which really does appear to be a tale of two cities. There are the new projects which have been built to such a very high standard, and then there are the heritage spaces – most of which are not designated and, in many cases, are suffering from neglect, or a lack of understanding of their heritage.

What we’re hoping to do is to expand a larger conversation [around] these heritage spaces, which are the connective tissue of these neighbourhoods, and to forge this kind of continuity and contiguity between their historic design, and how they serve a 21st century populace.

Spacing: Who are the stakeholders to consider, when taking-on a task like this?

Birnbaum: The goal of our coming here, for this visit, was to cast a wide net.

The most important thing that we hope for is to bring in the most diverse and robust group of people who want to be stakeholders for this, and that may vary, depending on the resource. But I think if you look at where it’s been done elsewhere, it’s very diverse constituencies, and at the end of the day, especially for these places that are neighbourhood-driven as opposed to new designs, it’s going to be driven by people who are already in love with these places. And that’s a great place to start.

Editor’s note: the complete interview transcript has been edited for length.