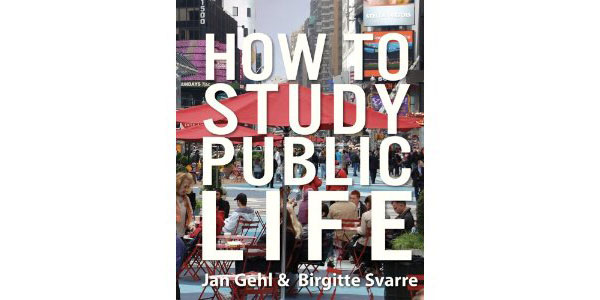 Those versed in research around public life and urban spaces are bound to know the name, Jan Gehl. As the founding partner of well-known Gehl Architects—Urban Quality Consultants and author of a number of popular and well-respected books – such as Life Between Buildings and Cities for People – his influence in the field is global in scale. So, whenever there is word that a new book of his is out, ears quickly perk up….as was the case with his most recent publication How to Study Public Life, co-authored with Birgitte Svarre.

As the name suggests, this most recent written work is a slightly different than his earlier ones, insofar that it provides readers, for the first time, with the methods and analytical tools that Gehl has developed, used and honed, over the course of his five decades of examining the complex interactions between people and the built environment. Given that books on public space and public life are relatively few, books on how to critically study the latter are fewer still. This puts How to Study Public Life in a rare category of books.

As with all of Gehl’s writings, the structure of the book is simple and the reading is easy and accessible. There are seven main chapters within, starting with Public Space, Public Life: An Interaction. This brief section sets the foundation for the rest of the book by introducing the nature of public life-public space studies, the need for contemporary tools to look at their relationship, the important role of direct observation vs technological solutions (GPS tracking, etc.) and key ethical considerations of data gathering.

This is followed by, what I would consider, the two most important chapters in the book – Who, What, Where? and Counting, Mapping, Tracking and Other Tools. Within the slim 25 pages within which both sections are packaged, Gehl and Svarre succinctly describe the five critical questions with which they engage public life-public space interactions (How Many? Who? Where? What? How Long?) and the tools they use to collect information (maps, photographs, diaries, etc), respectively. Accompanied by wonderfully descriptive images and sidebars, their compactness belies their significance and certainly supports the belief that the simpler things are described, the closer they are to the truth.

Given how quickly readers are thrown into the heart of the book, the fourth and longest chapter – Public Life Studies from a Historical Perspective – seems misplaced, at first glance. One would have expected it to be lead into the main content of the second and third chapters. That being said, it sits comfortably in its location, slowing the pace of the read and allowing reader to reflect back at key figures and writings related to public life studies. Particularly noteworthy for readers are the selected publications of public life studies of the past century (one pages 40-41) that, in aggregate, account for a thorough foundation in the subject.

Picking up on topics of the previous three chapters – How They Did It: Research – provides a number of two-page case studies of the research tools and methods in action. Although most of the precedents involved by Gehl, himself, a handful included where done by some of the key figures described in the chapter prior, such as Donald Appleyard and William H. Whyte.

The book begins to wind down with Public Life Studies in Practice, a chapter focusing on the role of public life-public space studies and presenting a number of them from various cities around the globe, like New York, London and Copenhagen. As with all the chapters, the text is peppered with important tidbits of insight, such as the fact that “many city centres have proven to be surprisingly uniform in size: typically 1x1km (or a bit more) with an area of 1-1.5km2, even though the population varies from 500,000 to several million.”

The book closes with Public Life Studies and Urban Policy—a short chapter looking at the role and positive influence public life studies can have on municipal policy frameworks, as told through the story of Copenhagen.

As we all know, the study of complex phenomena is no easy task and surely how people interact with one another and their surrounding environment belongs in this category. In sharing how public life-public space interactions can be systematically approached and taught, I don’t hesitate to say that How to Study Public Life is must-read for anybody and everybody entrenched in urban development, design and planning – from students and practitioners to municipal officials and policy makers.