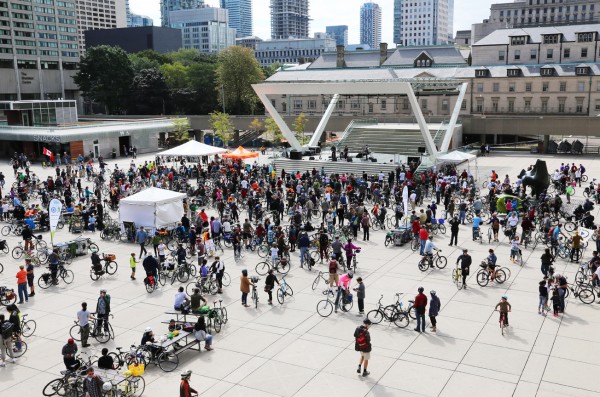 Most cities in North America are making some effort to fit bikes in, but given the huge interest in transportation cycling, and the mobility needs of increasingly large populations, they’re not doing it nearly fast enough. Which is why your trusty local cycling advocates and political champions are so important. Every inch of bicycle facilities has been won by fighting the good fight and activating the power of political will. So, if you care about riding safely in your city, you have a role to play by supporting local advocacy efforts and voting for those who understand the collective value of cycling infrastructure.

One of the greatest misconceptions still to be overcome about the various types of dedicated bicycle infrastructure, bike lanes and the like, is that these only serve a minority of the population — that they’re ‘pet projects for bicyclists.’ However, just like sidewalks, painted bike lanes and separated cycle tracks serve all road users by providing a clearly marked space for a specific user group, and in turn, adding to the safety and predictability of the roadway. That safety and predictability, in particular when reliably networked across a city via connected lanes, means more riders from all walks of life. Left or right leaning, suburban or urban, rich or poor, bikes are simply one of the most accessible and efficient forms of urban mobility available. While they mean much more than that to some people, at the heart of the matter is our fundamental right to choose how we move and make our way through daily life.

Given how little actual money is required, compared to the costs of public transit and highway projects, where there’s a political will, there’s always a way. An oft-quoted example comes from Portland’s Bicycle Coordinator Roger Geller who puts the costs into perspective: if Portland rebuilt its bike network from scratch today (over 300miles of bike lanes), it would cost $60 million – roughly equivalent to buying 1.6 km of urban freeway. Political champions know how to tap into, and build public and political support for projects that matter, and bike advocates know how to find, nurture, and support political champions.

Torontonians reading this post will be painfully aware of the upcoming municipal election – unsurprisingly, the central topic has been transportation, and transit plans in particular. If you don’t already know where your council & mayoral candidates stand on the issue of cycling transportation there’s an excellent set of survey responses that’s been compiled by the Toronto Centre for Active Transportation in partnership with several other organisations.

“We can create safer streets for cyclists, but we must communicate that need to our elected officials. In most cases across Canada, local roads are overseen by the local municipality. This presents an opportunity for action. Communicating with your town, city or ward councillor is an important first step. But don’t stop there! Organize with members of your community, determine the group’s top three priorities and then request a meeting with your local elected official. Ask your elected official for their support and don’t forget to follow up! Change is possible, but not without active engagement of local communities.” – Jared Kolb, Executive Director, Cycle Toronto

Although elections are a great opportunity to get engaged, you can have a positive impact and get connected with your local representatives at any time through the power of effective organizing. Cycle Toronto’s excellent Ward Advocacy program provides the framework to connect with like-minded neighbours, coordinate your efforts, and to map-out what changes to your community would be the most important for improving bike safety and access. Local councillors are primarily interested in the concerns shared by their local constituents. An organized, issue-specific group that presents a clear request and makes the case for achievable goals with broad benefits to the community is hard for an elected official to ignore. In fact, it makes their job easier because you’ve made a plan, and given them somewhere to start. This is far more effective than simply complaining about the lack of bike lanes or bike parking in the neighbourhood. Coordinated volunteer efforts can have significant results when focused locally.

Thankfully, there are more would-be political champions than ever and a much greater understanding amongst elected officials, bureaucrats, planners, business owners, homeowners, community leaders, and the general public about the return on investment that we enjoy collectively when bikes are meaningfully incorporated into the transportation network. We’re making excellent progress, but we can’t stop now – better yet, it’s time to double down. The end game might be to do such a great job of incorporating bikes that ‘cycling advocates’ are no longer necessary, but for now their efforts are critical ingredients to policy updates and tangible on-street improvements that improve safety and increase the predictability of our streets.

Urban populations are growing rapidly and our public transportation systems, often the victim of short term political tunnel vision, are dramatically underdeveloped and therefore increasingly unable to meet demand. Our urban roadway network really has nowhere to go, and can barely accommodate the current number of motor vehicles, let alone the ones set to arrive with a larger population. Bicycles are a significant pressure valve for traffic gridlock and transit systems running at capacity. The only way to increase capacity on existing roadway networks is to find ways to use the space more efficiently.

“I don’t bike because of ideology, and I’m not an advocate out of any love for cycling. I bike only so long as I enjoy it, and I advocate for a cycle-friendly city because I love my city, and I know what it could look like were it transformed to be more bike, and pedestrian-friendly. So it’s not about gear, or helmets, or cars. Even bike infrastructure is just the means to an end: making my city a better place to live in, for everyone. So enjoy cycling for what it is: you, your bike, and the world around you.”—
Christopher Chan, Executive Director, Edmonton Bicycle Commuters’ Society

While adding bike infrastructure is vital to the future health of our cities, equally important are clear explanations about how to properly use these new features. I’d suggest that there’s a tremendous need for broad public education campaigns to occur in tandem with the construction of all new bike specific facilities, and further, that ad campaigns which speak to all road users and make clear the roles, rights, and responsibilities of every mode of travel, would go a long way to improving on-street safety, and perhaps even building respect.

There are many ways to play a role in advocating for safer riding conditions, but just getting out to ride is a great start. It’s also worth checking out what your local cycling advocacy group is up to — now is a great time to show your support by buying a membership, attending events, or volunteering some of your time to help improve your city as you learn more about riding in it.

Even if it’s just one day a week, the best time to get started is now (or perhaps in the Spring). Enjoy the ride!

Here are some of the main cycling advocacy organizations across Canada – find out what’s happening in your city!

Yvonne Bambrick was the founding Executive Director of the Toronto Cyclists Union (now Cycle Toronto), and co-creator of Pedestrian Sundays in Kensington Market. She is currently working as an independent Urban Cycling Consultant, event & portrait photographer, and as Coordinator of the Forest Hill Village Business Improvement Area. Yvonne’s book, The Urban Cycling Survival Guide: Need to Know Skills & Strategies for Biking in the City, with illustrations by Marc Ngui, and published by ECW Press, will be available March 2015. Photo by Yvonne Bambrick.