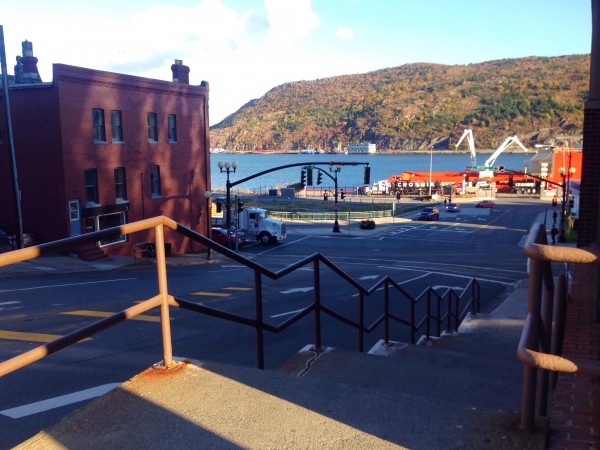 If you’ve ever tried to get around St. John’s at any time of year, (but particularly in the winter), you know one thing: the city is historic, and charming, and blessed with beautiful views — but it is not accessible.

Urban environments can provide access to a variety of services for citizens with accessibility concerns — for example, Toronto’s new ground-level streetcars, or buildings, like the Ottawa Convention Centre, that combine world-class design with inclusive access. But they can also present challenges, particularly when it comes to the areas of a city that have been around since before phrases like “urban planning” and “wheelchair access” were used.

Newfoundland and Labrador’s capital city is a prime example of that conundrum. The big-box stores and newer office developments have automatic doors and access ramps, but lack the charm of the city’s iconic colourful rowhouses. But the waterfront downtown area where those rowhouses are found are a maze of hilly streets — where the sidewalks often have stairs — and inaccessible older buildings, often with narrow aisles and two or three steps at their entryways.

A CBC video shot last year highlights the issues that the citizens of Canada’s most eastern capital city experience when navigating a combination of older streets and buildings and new construction, including steep ramps, high curbs, damaged sidewalks, and inaccessible buildings.

Municipal and provincial governments need to play a role in both ensuring that new developments are fully accessible and finding a balance between protecting the history of heritage buildings while allowing as many people as possible to enjoy and use them. But there are also solutions that can be used today, for low cost and minimal effort, but maximum benefit to both citizens with accessibility issues and business owner who want to serve all of their potential customers. 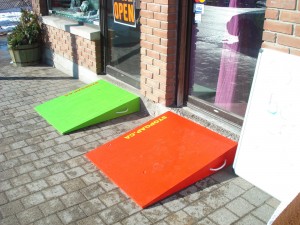 StopGap, which began three years ago in Toronto’s Junction neighbourhood, is one of those grassroots solutions. The idea for StopGap came from founder Luke Anderson’s own experiences navigating the city after his spinal-cord injury about a decade ago. “I was immediately introduced to a world that’s not really well suited to someone who uses a wheelchair,” Anderson said.

That world included six years spent relying on fellow coworkers to help Anderson deploy a ramp to get up three stairs to enter the office building where he worked. That and his other experiences led to the start of the StopGap Community Ramp Project, which provides simple wooden ramps to Toronto businesses and other buildings that request them.

The colourful ramps, built by volunteers with materials donated by local hardware stores, provide an accessible and affordable way for citizens using wheelchairs and other mobility devices — as well as strollers and delivery dollies— to easily enter buildings that could otherwise be inaccessible because of just a single step.

“Our mission is to help people see the benefits of an inclusive society and give them the tools,” Anderson said of the ramp project and the ramps themselves. “What we’d really like to do is inspire others in different communities to take on their own project using the resources that we have on our website.”

The StopGap site provides the information needed for individuals and groups in other communities to start ramp projects in their own communities, and Anderson speaks to children at schools and shares the group’s Ramp Man book, teaching the next generation about the importance of design that’s inclusive for everyone, regardless of physical ability.

Anderson himself admits that StopGap and similar projects aren’t a permanent solution to accessibility issues, and he is planning a cross-country Community Ramp Project that will engage community groups and politicians across Canada on accessibility issues.

In St. John’s, some things can’t be changed–those hills are there to stay — but others can be improved with an eye on both short, and long-term solutions. Some of those solutions will be outlined in the city’s Envision St. John’s municipal plan, which is currently under development. But grassroots projects like StopGap show that while bylaws and provincial legislation ensuring accessible communities are important, engaged citizens don’t have to wait for politicians to get on board to make their neighbourhoods more inclusive.