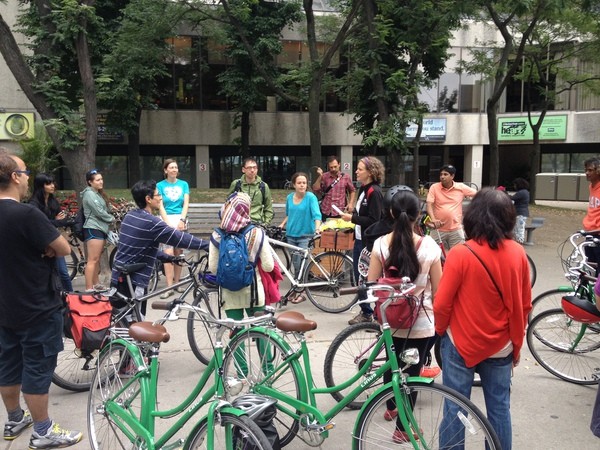 I was always a cyclist. In Sri Lanka, when I grew up, the bicycle was more than a recreational toy, it was a way of life. My mother’s gift to me for passing a national exam at Grade 8 was a utilitarian bicycle.

Then I came to Canada in the late 80s, on my own as a refugee fleeing persecution. I assumed that I would be joining an affluent, consumerist society, where owning a car for day-to-day transportation is a sign of success. After all, that is what anyone from a developing country expects, because of the images they are exposed to in the mass media. In Pickering, I shared an apartment with three friends who each owned their own car, and I planned to get a driver’s license myself.

But somehow, after securing my first entry-level non-skilled job in a factory, I realized how easy it was for me to navigate the streets, go to work, and do my day-to-day errands by bike. I fell in love with the bicycle again. Buying my first bicycle in Canada was like a homecoming to me. I never went back, and today my bicycle is part of me and shapes my lifestyle.

Fast forward to my employment with CultureLink as a School Settlement Worker, helping newcomer kids and families to get established in Canada. I began to notice that all the programming offered at CultureLink has two components. On the one hand, we encourage newcomers to retain and feel proud of some values and practices – especially their language, dietary and cultural practices. On the other hand, we help newcomers to adapt to the host country. I began to rethink: where do our sustainable habits fit in? In developing countries most of us lived with many sustainable habits due to sheer socio-economic reality. We did not consider them as conscious environmental habits, rather they were part of our day-to-day normal life. In Canada, most of us give them up under the new conditions and to fit into Canadian society. Yet I knew Canada was struggling to improve environmental conditions. There was a disconnect and from this observation came the “Green Settlement” concept, that we nurture diversity by encouraging newcomers to retain and share their sustainable green habits. In 2009, CultureLink officially adopted “Green Settlement”, trademarked it, and began to develop tangible programming.

Our most successful Green Settlement initiative has been our partnership with Cycle Toronto and our first joint project was called “Cycling: From Back Home to Our New Home!” From there we developed Bike Host and eventually the Toronto Cycling Think & Do Tank also became a partner. CultureLink had an established program called HOST, whereby they matched a newcomer with a mentor from the “host” community, to ease the initial transition during settlement. Bike HOST is based on the same idea. Newcomers are encouraged to retain their good cycling habits from home countries, and keep on using bicycles for transportation when it is viable. Some newcomers even start bicycling in Toronto when they didn’t in their home countries. Mentorship is provided by an experienced volunteer cyclist and eases the initial apprehensions about using a bicycle in Toronto. Bike Host also helps to break down some of the misconceptions about the markers of “success” in Canada. Bicycling for transportation in Toronto is not driven by socio-economic conditions and today joining the growing numbers of cyclists on city streets is a sign of belonging and success.