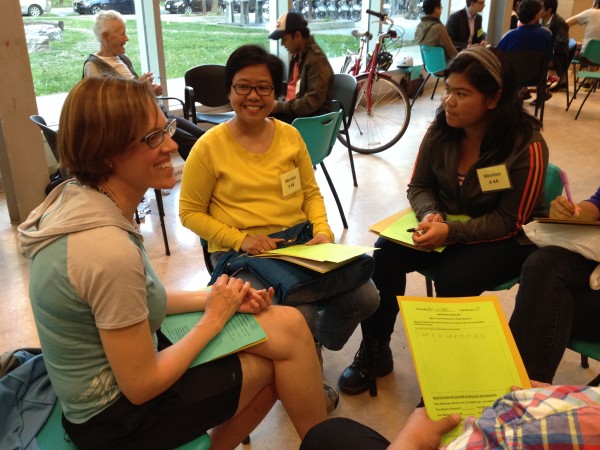 By Toronto Cycling Think and Do Tank

Tony Ducepec, his wife Dolly, and their children Paula, Pamela and Martin participated in Bike Host in 2014.

In June 2011, our family migrated from the Philippines to Canada, and since then we have not been to any city except Toronto. Toronto is where we want to settle permanently, so we wanted to explore it more. When we heard about the Bike Host program, we did not have a second thought about joining. We thought of it as a good opportunity to immerse ourselves to Toronto’s places and diverse culture.

Bike Host offered us a lot of different opportunities, but because we were basically neophytes in bike-riding, we focused on learning how to bike. Although we missed some of the Bike Host activities, the benefits we got from it were no less fulfilling.

I was the only one in the family who knew how to bike. The rest of the family taught themselves how. Dolly began as soon as she got the bike from Bike Host, and she practiced every morning from 6:00 to 6:30 all summer. Initially, it was only Dolly and I who rode the bikes. After a few days, Paula followed suit using my bike. Fortunately, our mentor Teresa found a bike for Paula shortly after, and Bike Host lent one to Pamela and gave one to Martin. Pamela got inspired and taught herself how to ride, while Martin joined us using his bicycle with training wheels. For many weeks, biking added to our family time. We biked at first in the parking lot of our apartment and then we moved to nearby school playgrounds and to High Park. Towards the end of August, we removed Martin’s training wheels. In just a few days, he was able to balance. He could ride a bike!

All this learning how to bike would not have been successful had it not been for the inspiration we got from Teresa Pavlin. We were blessed to have her as our mentor. After our match-up meeting, we met at the Indian Road School ground. It was raining that night. Despite the rain, she showed up to coach us. Then, in the next meet-up, she brought her family. We were all amazed to see her two daughters, who, young as they were, knew how to ride the bicycles gracefully. It was truly inspiring.

Our weekly meetings with Teresa lent themselves to deeper conversations about who we are as a family, where we came from, and what our pressing concerns were. In the process, Teresa became more than an acquaintance. She even went out of her way to help Dolly find a job – a sweet show of generosity that we deeply appreciate.

We also met other people through the Bike Host experience. The first time we became aware that so many people are into biking was when we attended the Bike Host event, “How Change Happens”. From there, we became more and more aware of all the bicycle enthusiasts around us. Whenever Dolly, Paula and Pamela rode their bikes going to the church and grocery stores, each time someone would come up to talk about his or her love for biking. People turned up to share the value they see in it.

Our neighbor must have seen the same value. When Martin was learning how to bike, a few of our neighbors came up to help. They, whose names we had never known, gave Martin a hand. One man physically guided him how to balance. The maintenance guy from another building helped Martin raise his bike seat because it was a bit low for him. One old lady cheered him from her window. A snobby-looking lady (who was not snobby) stood a few meters in front of Martin to lead his direction. In short, this biking activity turned out to be not just a family thing. It became a community activity. In just a few days, biking was able to help build relationships.

Now looking back, biking gave us not only the physical freedom to move around faster, and the social freedom to interact unreservedly with others, but also the freedom to believe. Dolly wished to learn how to ride a bike ever since she was small, but life got in the way, and she was not able to get around to it. When this opportunity popped up, she grabbed it right away hoping that she could still salvage what remained of her wish. She tapped into her belief that if she wants something, if she has her heart set on it, she will get. Indeed, she did it – biking has proved her right. This gave her and my whole family the freedom to believe.

Certainly, this belief bears on our life in general. As we struggle to settle here in Toronto, we sometimes find life a bit depressing. We are always tempted to lose hope. However, we are strengthened by the fact that if our goal is clear and we are determined to get it, we will reach it: efforts will pay off, help will come, resources will be available, mentors will be sent, other people will cheer, and relationships will be built – all will be provided just like what we experienced at Bike Host.