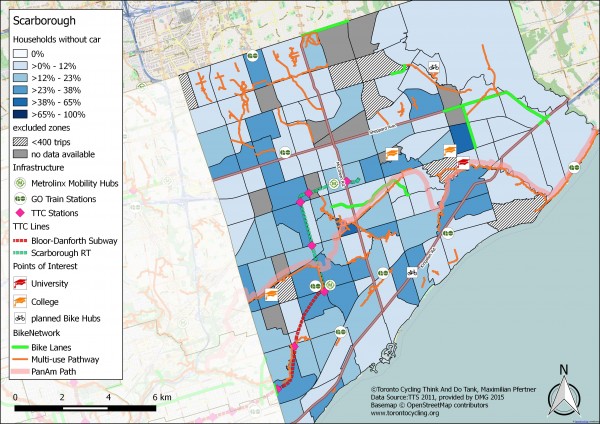 This post by Marvin Macaraig, Ph.D., is part of Spacing’s partnership with the Toronto Cycling Think & Do Tank at the University of Toronto. Marvin is the Scarborough Cycles Project Coordinator at the Toronto Centre for Active Transportation, a project of Clean Air Partnership. Scarborough Cycles is funded by the Metcalf Foundation’s Cycle City program, which aims to build a constituency and culture in support of cycling for transportation. All maps are by Maximilliam Pfertner.

You have probably noticed that there is a federal election happening, and that usually means a steady stream of promises and plans from all parties. As witnessed in any recent election, candidates will make several announcements calling for the need for ‘infrastructure investment’.

The Federation of Canadian Municipalities has stated that investing in local infrastructure is critical to maintaining economic competitiveness, and in 2007 reported that Canada has fallen behind by $123 billion, which has resulted in a measurable and distinct infrastructure deficit. The Toronto Region Board of Trade has a dedicated Infrastructure Committee whose main goal is to advance, “stable, long-term financing for a massive and long-overdue expansion of pubic transit and road networks.”

Highlighting this need to address the infrastructure gap, all three major parties have made several multi-billion dollar commitments to boost infrastructure spending immediately. Each of the parties’ plans differs in the amounts and overall timeframes, but all pledge funds in the billions. For many, ‘billions’ is an abstract figure, and the reality is that building a bridge or reconfiguring a road is expensive. However, expensive does not necessarily mean safer, less congestion, or even better looking streets for that matter.

Engineer and planner, Charles Marohn, President and Co-Founder of Strong Towns, and upcoming keynote speaker at the 8th annual Complete Streets Forum organized by the Toronto Centre for Active Transportation (TCAT), has spoken and written extensively about the pitfalls of simply building extra-wide roadways that are prohibitively expensive to maintain, especially for cash-strapped municipalities. Marohn argues that our current funding mechanisms for suburban development operate like a Ponzi scheme and have left North American cities drowning in debt. What is needed is a return to creating neighbourhoods of scale.

So the question is how can cities better spend their infrastructure funds and recoup their investment over the long-term? There is no doubt that metropolitan regions require highways, railroads, bridges, and public transportation systems. Simply put, transportation infrastructure is fundamental to any modern economy. But, just like your house or apartment, regular maintenance is required. The bigger the house, the more it costs to keep it in good working order. If you are looking for ways to save money, you can build a smaller house… or street.

The next question is how do we get everyone from A to B if we do not widen our roads? What is often lost in this discussion of growth and its connection to billions in infrastructure spending is a discussion on the specific needs of particular communities. Specifically, we need a more nuanced discussion of the smaller/lighter, less costly transportation infrastructure required at the neighbourhood scale that can make communities safer, prosperous, and more livable. 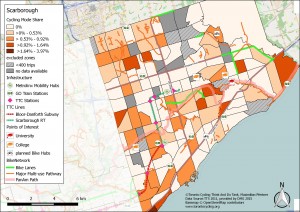 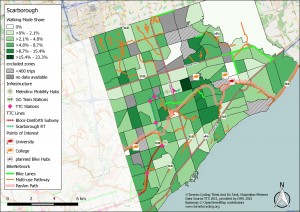 Recent research in Scarborough by the Toronto Cycling Think & Do Tank and TCAT has shown that despite the common perception that everyone living in the suburbs owns a car, the reality is that car ownership is not homogenous, and there are distinct pockets where residents are more likely to rely on other means to get around. Not surprisingly, some of these communities in Scarborough have already been identified as areas that would benefit the most from rapid transit investment. Combining this data with maps highlighting Walking and Cycling Mode Share in Scarborough reveals both noticeable infrastructure gaps and opportunities where neighbourhood-scale/targeted investments, have the potential to immediately improve the overall safety and livability of these communities.

For example, over the past few years the City of Toronto has made improvements to the Gatineau Hydro Corridor Trail, which provides cyclists with a safe and speedy east-west route to get across Scarborough. However, after riding the route on numerous trips it becomes plainly obvious that getting to the trail presents challenges as Scarborough has limited north-south cycling infrastructure. Furthermore, although it may come close, the trail does not directly connect to any of Scarborough’s key transit hubs.

In this case, additional infrastructure investment in the bikeway network would likely go a long way to encourage active transportation in Scarborough. Other small-scale infrastructure investments that would help boost cycling in suburban environs include: improvements to wayfinding, the installation of trail lighting, enhanced pavement treatments, and higher quality endpoint facilities (e.g., secure locking stations), all of which could be completed at a relatively low cost (i.e., not billions). For reference, Toronto spends only $8 million per year on maintaining or expanding its cycling infrastructure.

In the end, whichever party wins this federal election they will inevitably begin spending billions on infrastructure. It is true that announcements for new subways and bridges make for flashy headlines, but we need to take a closer look at how small neighbourhood-scale infrastructure investments can alleviate the spiralling debt cycle of unsustainable suburban development while making timely and tangible improvements to communities.