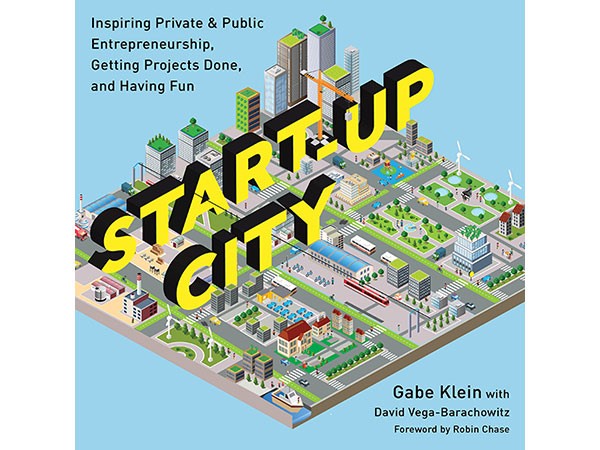 When I was in my second year of University I wrote a blog post that got a lot of (very rare) traction. I pitted the new ride-sharing program Car2Go against long-time staple ZipCar. I tried to be unbiased and break down each other’s model, and in the end I found Car2Go was on the brink of something new and exciting with how they were operating, but I conceded that ZipCar had built the entire framework of ride-sharing and that I couldn’t imagine a picture without them in it. Consequently, Gabe Klein—author of Start-Up City—was a key person at the head of ZipCar and within the book, readers discover all about how he worked his plans into ZipCar’s corporate culture and grew the brand.

Klein started his journey managing a bike store and jumped around, constantly innovating and wanting to be at the forefront of business. He crafted some amazing models, which read so simple (keep the customer first) yet seem to still be missed opportunities. Eventually, Klein made a large leap and moved into the bureaucratic world of government transportation. Working under the mayors of Washington, D.C. and Chicago, Klein realized quickly that there was a large opportunity to bring his skill as an entrepreneur to a place most known for slow moving, heavily contested decisions.

The book is broken up into eight lessons that take the reader through simple things like, “Don’t Be Afraid to Screw Up and Learn” where the emphasis is on the learning aspect. From there, Klein talks about some of the different ways to manage others and empower your team, a lesson on budgets, marketing, how to find creative ways to fund your projects, and how to bridge the divide between public-private partnerships.

The interesting constant throughout the book is that it is seems to be written for a very narrow audience: those who would find themselves in situations where they are working in the planning parts of government. The interesting part about this specificity is that it does not deter someone in a non-government position to read and learn from it. For instance, I had heard of S.M.A.R.T. management (Specific, Measurable, Agreed Upon, Realistic, Time-Based) goals before, but I hadn’t heard of Lean Six Sigma, which is a “strategy for process improvement that irrigated in Japan and emerged from manufacturers like Motorola.” Klein gives a perfect example of how it works:

Six Sigma says that anything less than [a] 99.9999998 percent error rate, or 3.4 errors per million, is unacceptable. If there is an error, there must be a formal process to ‘lean out’ the wasted steps in the process that led to the error…Why is 99 percent not good enough? Let’s use replacement tires for vehicles as an example…In 2013, 201.6 million replacement tires were sold. If 99 percent were error free, that means more than 2 million defective tires would be shipped to consumers and installed…But with Six Sigma, we end up with a maximum of just 686 faulty tires on the road.

This example really stuck with me, and as the book continued, there were more little lessons like this that were eye opening, and could be transferred to my own work environment. There were, however, quite a few items that were very specific, as the book went on. Again, it was very intriguing to read, as Klein’s writing style is highly accessible, but when he speaks of how to creatively move money around budgets to pay for something now while one may not have the money for two years and the mayor may change in the meantime, for instance, there isn’t much room for interpretation. Again, however, this is priceless knowledge if one is working within the government and trying to get things done.

The oddest, and most exciting part for me, was the end. The last chapter—titled Lesson 8: Drive Change—speaks to Uber and Lyft (car sharing services that are currently revolutionizing transportation in cities), the rise of automation, and how governments will need to adapt to the changing transportation landscape, on the fly. I have read items like this before, like in the ominous Rise of the Robots which focuses on the rise of automation in America, but what made it slightly odd was that it seemed out of place. The book hadn’t been moving toward it in anyway other than the random mention of Uber and Lyft a time or two prior.

Perhaps it’s because I’ve personally focused a lot of time researching the “self-driving” or slightly automated car, and how this will impact our future, that I pulled almost more out of that one chapter than I did from the entire book, in the best sense. I was extremely thrilled that someone who had worked in government could see the shift that could occur on our roads as soon as the next ten years. Automation changes everything around how we allocate land for parking, how we deal with short haul trips around the city, fuel requirements (short trip cars could essentially travel to their destinations picking up and dropping off their users, and then pulling off to charge when they knew they were at a certain threshold, making them extremely efficient), and even space allocated to the roads themselves, as a car carrying one or two people could be a lot smaller.

One idea that was even posited by Klein was to use a slow-lane that was for people not in a rush, that could be shared with pedestrians and bikes. People hear Uber and they think Taxi, but the reality is, when you hear Uber, read about Google and Tesla and the innovations in wireless charging and battery capacity capabilities, all of a sudden you see how large our world could change, in such a short amount of time. Given how mauch has changed within the past ten years ago, it isn’t hard to see that with the exponential growth of this type of technologies, we could be staring down one of the largest urban transitions since the rise of the car, itself. All of these elements have a bearing on the built environment and Klein made sure to reference back to this frequently, but even his conclusion read more like a futurist manifesto than a Director of Transportation letter.

This being the case, the only critique I could give about the book was that it didn’t contain enough of what Klein focused on in Lesson 8 and the conclusion. Truthfully, I wanted them to be a book in their right. But in saying that, I realize that putting them in the context of Klein’s argument—starting with governments and private entities and moving through important lessons on management and approach—the future is just as important and needs to be treated as such.

In the end, I loved Start-Up City for its witty writing, the lessons it taught and its amazing push of future technology at the end. Gabe Klein did an amazing job of distilling his practices, the elements that made him what he is and the cities he worked with, presenting them in a fun and interesting way…definitely worth of the short time it would take one to read it.

One humble request, however: Dear Mr. Klein, please write a book that expands on government and the future of technology. They need it laid out.  We need it laid out. And if you can make it as accessible as you’ve made Start-Up City, our transition to the future will surely be that much easier.