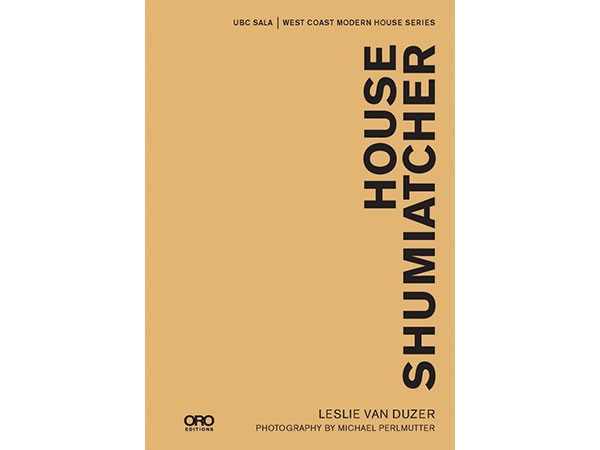 This is the story of a house, designed by hatmaker-turned-architect Judah Shumiatcher, built for his family in 1975, and demolished in 2013. Like so many other distinguished houses in Vancouver, the only crime House Shumiatcher ever committed was to be sited on a plot of gold.

Excerpt from the Introduction

As an architect, it could be said that to design and build one’s own home is to achieve both a personal and professional milestone in one’s life. Frank Lloyd Wright built his own home several times over, first in Oak Park while building several other homes in his signature Prairie Style, and later with his Taliesin East homestead, which as the subject of both scandal and tragedy, provides a notoriety that transcends its bricks and mortar, becoming the stuff of legend. Nearly a century later, another architect named Frank, this time in the autumn of his career, renovated his own home and turned the page on modern architecture in such a way to set the stage for his future design for the iconic Guggenheim Museum in Bilbao.

Here in Metro Vancouver, many West Coast Modern Homes, also the subject of a previous Spacing review, have been designed and built by their resident-architects, from Ron Thom to Peter Oberlander, Ned Pratt to Fred Hollingsworth. And much as Frank Gehry renovated his home in Santa Monica, exposing the ceiling joists and wrapping the exterior in chain link, so too did Arthur Erickson retrofit a humble Vancouver garage to create his own studio and home. In every instance, the outcome was a unique expression provided by the voice of the lone architect as creator.

More recently, there have been a few near misses, with such iconic architectural expressions as the Binning House recently avoiding the wrecking ball, along with another house by Ron Thom in October. In both cases, new buyers recognized the legacy of their purchases, and revealed they would restore their homes to their former glory, ensuring that they continue to inspire the greater architectural community that brought them forth. As we know, however, this unfortunately is often more the exception than the rule. Several houses by the West Coast modernists, simply because they are less known and publicized, continue to fall victim to the current unprecedented speculative real estate craze in the Lower Mainland, often disappearing forever without even a single photograph to prove that they ever existed.

With this is mind, several local architects, UBC architecture professors, and critics have sought to ensure that these heritage treasures receive the publicity they need in order to save them, and failing this, to at least document them so that once they are gone there exists a rich photographic and critical document, to ensure they do not disappear completely. In the case of the Binning house, architectural critic Adele Weder crusaded along with others to ensure the right buyer was found in order to preserve it. In a similar vein, UBC School of Architecture and Landscape Architecture professor Leslie Van Duzer has given us House Shumiatcher, the first in a series of books to be published by UBC in order to provide an architectural discourse on those houses that are not as fortunate as the Binning house.

Designed and built in 1975 on a gorgeous lot in Point Grey, the resident-architect provided for himself and his wife a modest yet eclectic house, clad in wood on all its interior walls, floors and ceilings, along with its exterior. Comprised of three storeys stepping down a steep north-facing site, the house’s most idiosyncratic feature is its absence of 90 degree geometry in its floor plans. To open up the interior spaces to the incredible north shore vistas, Shumiatcher employed a 120 degree geometry, such that the house is laid out in a series of hexagons, with this shape being used not just in plan, but as well as an ornamental motif featured in the interior’s balustrades and even tablecloth patterns.

As both an architect and builder, Shumiatcher had the added advantage of being the general contractor for the house’s construction, a fact that must have made it all that more difficult to be present for its demolition in 2013, and after selling it for what must have been a small fortune, as the piece of property on which the house sat was most certainly worth. For as Leslie notes in the book’s introduction, had it been built in Parksville or Kamloops, the house would never had to have been bulldozed to make way for yet another McMansion.

To preserve it then, the author provides an apt description of the house’s site and materiality, fondly recalling the richness of the house’s landscape, how one approached it from the street, along with the awe inducing views of the Spanish Banks and North Shore mountains with which one was confronted once inside. As a hatmaker turned architect, Shumiatcher would have often enjoyed the pun on words he would’ve elicited from the observation that he wore many ‘hats’ during its construction, as not only an architect, but a mason building the house’s two stone fireplaces, and as millworker—designing and executing the many built-in’s prevalent throughout the house.

With her essay accompanying the book’s numerous colour photographs by Michael Perlmutter, along with wonderful line drawings of the house’s plans and elevations, Leslie divides her essay into six parts, in order to capture all aspects of the house – site, architect, geometry, furnishings, windows, inhabitation. The essay and photographs are bookended by a brief timeline of Shumiatcher’s career at the book’s close, while the opening pages of the book include a brief foreword by fellow UBC professor Christopher Macdonald, who speaks to the new series of books:

“The residences brought together in this series were conceived in an era of economic boom, social change and a vibrant arts community that found expression in domestic construction. While they share an ethic, they are also distinguished by the specificities of their clients and the imaginative response of their designers. Collectively, the houses, each with their own narrative, contributed to the development of a unique West coast idiom.”

A most satisfying read within a compact 5 1/2” x 8” hard cover frame, these new books from UBC SALA, and curated by Leslie, Christopher, and Sherry McKay, are set to be a much needed response to this disappearing idiom. Representative of a bygone age, they are a testament to a slowness lost upon a younger generation who have only ever known our present fast-paced world of rapid globalization. With House Shumiatcher and many more like it to come, we can hope that, if we cannot protect our West Coast legacy of vernacular architecture as we did with the Binning house, at the very least we can preserve it in print and photography, providing a record of those lost icons that have created a legacy here on the Pacific west coast.

For more information on the House Shumiatcher visit the ORO website.