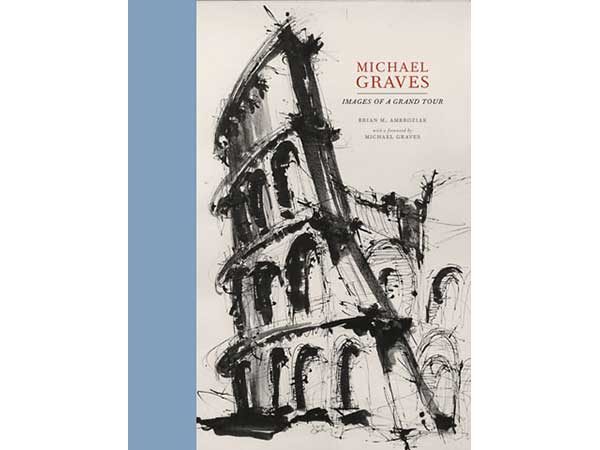 Between sitting alongside Peter Eisenman, Charles Gwathmey, John Hejduk and Richard Meier as a part of the New York Five and pioneering the Postmodern Movement, it is fair to say that the late Michael Graves has made a significant mark on architectural history. Passing away of natural causes at the age of 80 in 2015, his talents crossed disciplines—from architecture (including buildings such as the Portland Building and the Disney Headquarters) to graphics design and industrial design (from dinnerware and jewellery to clocks and watches).

Central to his many successes was his ability to draw—an act he continued to advocate for despite the rise of digital technologies within the discipline. This life-long passion can be traced back to the 1960s when he won the Prix de Rome, spending two years critically observing, painting and drawing across a number of European countries. And although many of his monographs allow us to see a many of his drawings, including the many beautiful renderings on the yellow tracing paper he was well known for, Michael Graves: Images of a Grand Tour takes readers back to a time before his fame, as he attempted to visually record, and learn from, his European travels.

As compilation of photographs, pencil sketches and ink washes, the main focus of the book is within chapters organized by locations he travelled to over the course of his two years – Rome, Other Italian Locales, Greece, Turkey, France, Spain and the United Kingdom. As the latter are all visual, with the exception of small, succinct captions citing the title, location, date and media, the written content bookends the visual material. More specifically, a Foreword by Graves and a short essay that contextualizes the work by Brian Ambroziak—The Necessity of Seeing—open the book, while Graves’ piece The Necessity for Drawing: Tangible Speculation and Ambroziak’s Volume, Surface and Plan, offer thoughtful reflection on the the merits of drawing as a practice and careful analysis of various works within the book, respectively, at the end the book.

Insofar that drawings, paintings and photographs filter the world through the eyes of their creators, Michael Graves: Images of a Grand Tour is a wonderful compendium of visuals that offers readers a glimpse into the mind of the soon-to-be-influential designer during the formative years of his career. Through his works, you see him struggle to capture the various unique monument, spaces and environments the he was exposed to, through a variety of techniques and media—an endeavour that would inevitably lead to insights that had a direct impact on his work and the way he approached design. In the words of Ambroziak: “Graves drawings, paintings, and photographs illustrate the architect’s process, the means of translating experiences into design.”

It goes without saying the Graves, travelled to Europe a number of times after the Grand Tour, sketching, painting and photographing continuously. These served to grow his archive, one that he referred to frequently over the course of his successful career. And fortunately, through Michael Graves: Images of a Grand Tour, those of us looking continuously for inspiration, and interested in watching a beautiful architectural mind unfold, can also add his work to our own reference libraries.

Erick Villagomez is one of the founding editors at Spacing Vancouver. He is also an educator, independent researcher and designer with personal and professional interests in the urban landscapes. His private practice – Metis Design|Build – is an innovative practice dedicated to a collaborative and ecologically responsible approach to the design and construction of places. You can see more of his artwork on his Visual Thoughts Tumblrand follow him on his instagram account: @e_vill1.