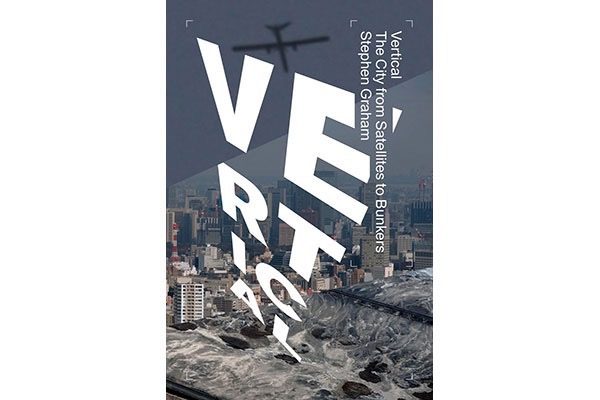 We popularly tend to think of cities horizontally—as entities that blanket the terrain. This perception has been fostered by the bird’s-eye-view-of-the-world bias we’ve been bombarded with to over the course of our lives: one that continues to be promoted by all the device-based mapping applications we use on a daily basis. Are there implications to this limited way of seeing the world?  Is the centuries old practice of ignoring the vertical dimension still valid in our contemporary urbanized society? These are the fundamental questions powerfully addressed in Stephen Graham’s most recent book Vertical: The City from Satellites to Bunkers.

Opening with the Oxford English Dictionary’s definition of “vertical”, Graham’s wonderfully dazzling cross-sectional tour puts forth a powerful argument as to why our conventional ‘flat’ reading of the world needs to be re-calibrated to meaningfully engage the vertically layered reality of society. He does this by literally delaminating and critically examining wide-ranging themes intricately related to urbanism, across a vertical axis: necessarily slicing through a diversity of disciplines, in order to do so.

In keeping with the motivations of the book, Vertical is divided into two broad Parts, hierarchically subdivided into vertical layers that address a specific “structure, site or cultural world”. Part One: Above, is separated into—Satellite: Enigmatic Presence, Bomber: Death from Above, Drone: Robot Imperium, Helicopter: Direct Arrival, Favela: Tenuous City, Elevator/Lift: Going Up, Skyscraper: Vanity and Violence, Housing: Luxified Skies, Skywalk/Skytrain/Skydeck: Multilevel Cities and Air: Lethal Domes. Continuing this vertical decent, Part Two: Below is split into Ground: Making Geology, Basement/Cellar: Urban Undergrounds, Sewer: Sociology and Shit, Bunker/Tunnel: Subsurface Sanctuaries, and Mine: Extractive Imperialism on the Deep Frontier. These are bookended by an excellent Introduction that sets the foundation for book in describing the history and limitations of geopolitics as a ‘flat discourse,’ as well as an equally cogent Afterward that sums up the journey.

Given the sheer quantity of chapters, is easy to imagine Vertical as a thick tome, as complex to read as its subject. In reality, however, it’s a wonderfully dense yet extremely accessible (and addictive!) 400 page whirlwind of information, set within a compact 8” x 10” frame. No stone is seemingly left unturned and the close-packed content is supplemented by an incredible array of footnotes at the bottom of each pages, for ease of reference. One cannot understate the significance of this simple layout decision by the publishers. Given the transdisciplinary nature of Graham’s endeavour, readers can fluidly refer to and research the strong footnote content.  I did so constantly and created an extensive folder of excellent online references, over and above the wide array of new books and authors I was introduced to across relevant disciplines.

Given the density of the content, I would normally avoid summarizing the content of the book beyond the above. However, in the spirit of doing the relevance and importance book even a little justice, allow me to give extremely brief summaries of each chapter just to whet the palette:

Needless to say, Graham’s gaze seemingly leaves no stone left unturned: critically examining a vast panorama of critical urban issues rarely discussed in a meaningful way. This being the case, I do not hesitate to offer Vertical: The City from Satellites to Bunkers as one of the most important books on cities of the recent past. It is a must-read for anybody and everybody who is involved in city making—architects, urban planners, landscape architects, politicians, geographers, urbanists of any kind—as a necessary remedy to our lopsided survey of the modern city.

For more information on Vertical: The City from Satellites to Bunkers, visit the Verso website.