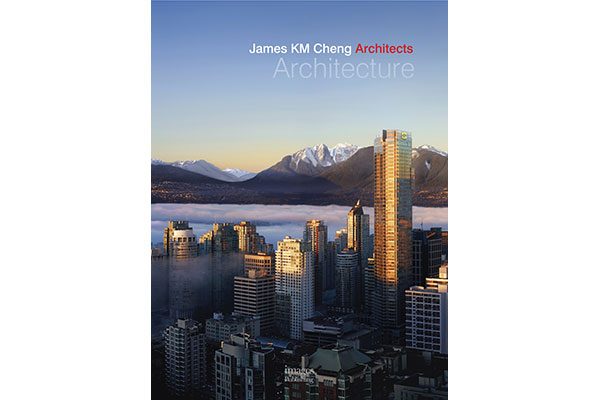 One cannot understand the architecture and urban design produced by JKMCA without understanding the life experiences, training, and apprenticeship of James K. M. Cheng. At many levels, the story of this Hong Kong immigrant, trained in the United States, mentored by Canada’s greatest architect, is also the story of his beloved Vancouver. His city is his urban laboratory, but it is also a gallery of thoughtful city-building that is of increasing global interest. Not despite but because he works so well with real estate developers, Cheng manages to enhance the British Columbia metropolis in the form of public spaces, elegant buildings and ideas that engender graceful streets and memorable skylines.

Long overdue, this new monograph on James KM Cheng and his practice provides a glimpse into this decades old office and how it has transformed the downtown Vancouver skyline. A longtime champion and friend of Cheng, architecture critic and curator Trevor Boddy has given us a book worthy of his mentor, having also included his work in his Vancouverism exhibition in 2008. As editor of three books now on prominent local practices—including ones on HCMA and Helliwell+Smith—Boddy is currently working on similar monographs for Michael Green, Alfred Waugh, and Stantec.

For this book, Cheng and Boddy have collected some of the architect’s best known work, including both of the Vancouver and Toronto Shangri-La towers, as well as new projects in both the United States and China. His contributions to the urban fabric of downtown Vancouver is undisputed, and both his early work at the corner of Georgia and Bute Streets is here, and includes his more recent four-tower and Costco podium next to Rogers arena on Expo Boulevard. Both the new Shaw tower and Pacific Rim Fairmont hotel are also here, with the perforated metal screen of the latter providing the cover image for the book.

With a preface by George Baird, who calls Cheng’s transformation of the mythological imagery of the city both dazzling and hypnotic, Boddy gives a brief preamble on the architect’s contribution to Alberni and Cordova Streets before launching into his introduction of Cheng. The editor then divides the book into three scales, from the more intimate single family home (including the architect’s own home) to the large scale residential tower, to the even larger macro-scale of the city’s OCP and street grid.

Perhaps not known to most, Cheng is himself a talented photographer, having had a passion for it since he was a child growing up in Hong Kong. Trevor points out it in the book’s Introduction that the photos in the book are with a few exceptions all by Cheng himself, making him a rarity among his peers for doing this double-duty. It is also not lost on Boddy that this has also been key in how the architect has delivered his brand to his developer clients, and that the pictorial representation of his work has been critical in winning, and keeping, these much coveted clients over time.

Boddy also describes how, while still an architecture student at the University of Washington in the early 1970’s, Cheng designed his first multi-family project for Bellevue while working part-time—a project which would go on to receive an AIA award and be published in Architecture Record. “In only his early twenties, James Cheng had taken control of a large and complex project, designed and detailed it in a skilled manner, then photographed and promoted the work into national publication and awards from his peers.”

After graduating, Cheng came to Vancouver at the recommendation of a contact he had made at Architectural Record, and was interviewed by Arthur Erickson himself as his office was working on the provincial Law Courts and Robson Square. Under the guidance of this important commission’s project architect, the late Bing Thom, Cheng helped the team to realize much of what was ultimately built, with some of Cheng’s exceptionally exquisite drawings of the project included here in the book’s introduction. As Boddy points out, Cheng would learn much at Erickson’s office, including the proper use of local materials and working effectively with a landscape architect, among many other valuable lessons.

After a few years at Arthur’s office, Cheng left to pursue his Masters degree at Harvard in 1976. During his time there, the young architect would be exposed to the lessons of several then current modern masters, including James Stirling, Michael Graves, and Arata Isozaki, but it was most certainly his thesis chair, Richard Meier, to which Cheng is and continues to be most indebted for helping him define his early architectural expression. And as Boddy points out, his influence continues to be an inspiration for him, as is most readily seen in many of his early house designs as well as his 1987 Burnaby Central Library and Civic Centre.

Establishing his office in Vancouver, it would be his early multi-residential projects on the Fairview Slopes and at Cambridge Court which would provide the launching point for his numerous podium-tower projects, starting in 1988 with his prominently sited twin towers on Beach Avenue, across False Creek from Granville Island. With a street-friendly podium consisting of townhouses with their own separate entries, the now ubiquitous slender towers that characterize Vancouver’s downtown peninsula had their debut here.

The book closes with a short essay by the editor on the future of Cheng’s practice, and its ongoing exploration of the urban petri dish in which his projects are testing the limits of the modern city in its creation of rich public realms while pushing the envelope of housing burgeoning cities, locally and abroad. A welcome addition to any architectural library, City Builder: The Architecture of James KM Cheng is a fitting tribute to its subject, and is a long overdue monograph on this local architect’s contribution to the built realm in Metro Vancouver.