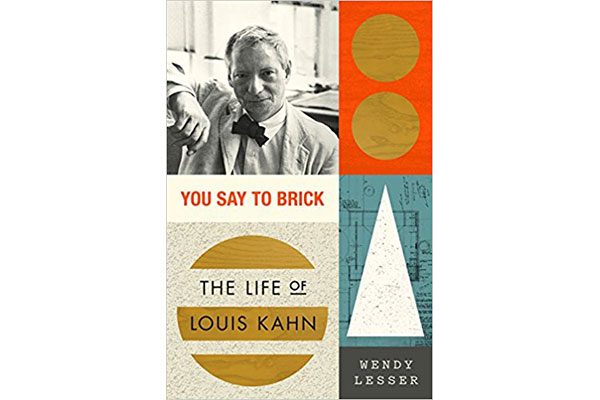 When I was completing the final project of my Interior Design degree, I started the project off by buying a monograph of well-known modern architect Louis Kahn. Fascinated by the symmetry and the use of hard materials that somehow read as soft and delicate, I used a lot of his ideas in said project. The one thing the book didn’t do well was explain who Louis Kahn was, or what his story was. One had to believe that, based on his work, it must be an interesting tale. As such, it was with great enthusiasm that I read You Say To Brick: The Life of Louis Kahn, a magnificent book on the life of a magnificent architect. I typically don’t go out of my way to read biographies unless it is someone I am truly interested in, but You Say To Brick didn’t read like a typical biography. It had more flair, as if you were reading about a fictional character, and it was through that style of writing that the book hooked me instantly and pulled me along.

The book begins at the end and ends at the beginning, which I won’t lie, was stressful. Before you’d even grown to love or hate the things that Kahn did, he was gone, and his death was respectfully laid out bare in front of you: the portrait of a man who did what he had to do to keep designing, no matter the personal cost. Beginning a book like this is a risk, but I believe it paid off. We are immediately shown Kahn’s best and worst qualities, seeing a snapshot of who he truly was. Knowing that you’ve gotten the hardest part out of the way, allowed Lesser to explore his life in greater detail as the book goes on, without the looming and impending dread of his death coming at you at some point in the next couple hundred pages.

Between each chapter is a section called In Situ where Lesser explores a piece of Kahn’s work. These sections look at the Salk Institute for Biological Studies, the Kimbell Art Museum, the Phillips Exeter Library (a project that I personally gleaned a lot of information from for my project those years ago), the National Assembly Building (Jatiya Sangsad Bhaban) of Bangladesh, and the Indian Institute of Management Ahmedabad. These brief pauses are a perfect way to punctuate the fact that the man and the work were to be viewed as one entity.

As Lesser walks through the halls of the Salk Institute, she meets and interviews people who not only reflect on the building, but reflect on Kahn as well, which says a lot about his character and the impression he left. Tim Ball, the maintenance director at the Institute, believes that “everything about the design that you thought was done for aesthetic reasons turn out…to have its practical side.” What these In Situ moments do is cast a light on a certain project, to bolster Lesser’s travels through Kahn’s life in the other sections of the book.

The book is filled with the drama of Kahn’s every day life; family outbursts at his funeral over his mistresses children and where everyone was allowed to sit, the fact that he married and remarried and had children with three different women, his initial trials and tribulations with his business partners, and a rocky start to a career that never fully saw him receive the fame and glamour that other architects have risen to.

While the book argues that Kahn’s name is now well-known, it makes clear that it was not always this way. And reading how he persevered right up until it literally killed him, makes for a heart wrenching and exciting read. Even if you are not interested in architecture or design, Kahn’s life was fascinating enough to keep you turning the page to learn more, and You Say To Brick: The Life of Louis Kahn, is a perfect and stunning homage to one of the greatest thinkers of our time.

For more information on the You Say To Brick: The Life of Louis Kahn, visit the Farrar, Straus & Giroux website.