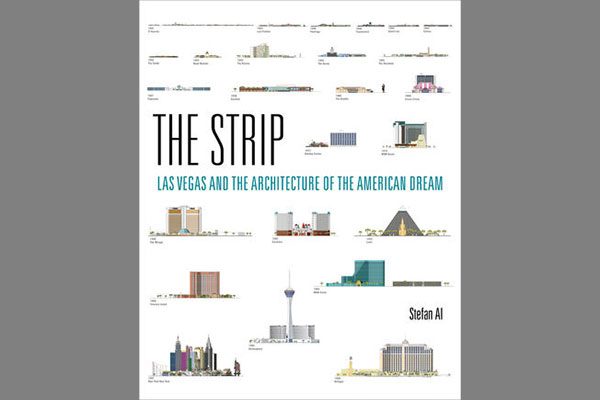 The first time I visited Las Vegas, I was quickly taken aback at the structures. I’d just returned home a week earlier from a trip to the Atacama desert in Chile, and the two landscapes were more eerily similar and egregiously contrasting than I could have imagined. As I walked the Strip, I was struck by the fact that my sense of scale was completely off, and as I walked, nothing seemed to get closer, as the scales of the signs and facades, statues and ornamentation were unlike any I’d ever seen before. It was fascinating in its complexity, and I read quite a few books on Vegas after that, but opening up The Strip: Las Vegas and the Architecture of the American Dream by Stefan Al was the first comprehensive architecture-based history lesson I’d read on the iconic desert highway. Al’s book is an exhaustive yet accessible look through what made Vegas what it is today, and is a comment on how the Strip has influenced the rest of the world’s architecture.

Before diving into the content of the book, I’d love to highlight the formatting as one of my favourite aspects. The large 8″ x 10″ pages allow for full size historical photographs and reproductions of blueprints and posters—in keeping with the idea of Vegas being a highly visual experience. The subheadings within each chapter provide great breaks and help to jump back to a specific area for quick referencing. The quirkiness of the subheading titles—“Casino Suburbanism”, “American Babylon”, “Disney À La Vegas” to name a few—are a wonderful pause in themselves.

The book itself is broken into nine sections, with insightful essays as bookends—opening with Las Vegas as America and ending with America as Las Vegas. The basic tenet of the introduction is perfectly summed up by the last line which sets the stage for the argument presented in the book: “Las Vegas is a microcosm of America.” The theory that runs through the book is that as American values and desires changed, so has the Strip. Vegas was there with cutting edge ideas to refine and recalibrate, until, as noted by the title of the conclusion, America (and the world) has learned much and grown from the ideas presented first in Las Vegas.

The pieces between these two essays are the seven sections related directly to Vegas’ history through architectural periods: Wild West (1941-1946), Sunbelt Modern (1946-1958), Pop City (1958-1969), Corporate Modern (1969-1985), Disneyland (1985-1995), Sim City (1995-2001), and Starchitecture (2001-Present). These periods correspond highly with influential events in American culture, such as the rise of the atomic bomb, Disneyland’s rapid fire success with their amusement park and unique style, as well as the rise of Starchitecture in the US and around the world. What began as a prohibition fuelling the Neo-Wild West quickly transformed and transformed again, until the overarching result was a constantly shifting landscape that is fluid in its design.

The focus of this fantastic book is not solely on architecture. Interior design, marketing, and sign designers are all given their fair due (good and or bad). In the conclusion, Al writes that “as outrageous as The Strip’s excesses may seem, it has always been the ultimate manifestation of a quintessentially American practice: marketing.” Vegas has had to remain current and ahead of the times to survive as a desert city fighting regulation, the environment and, at times, the entire United States, to consistently remain relevant.

Overall, The Strip: Las Vegas and the Architecture of the American Dream is a wonderfully interesting and fun ride through one of the world’s strangest locations. Stefan Al has done it great justice, creating an amazing collection of images and historical anecdotes that will delight readers from many realms.

For more information on The Strip: Las Vegas and the Architecture of the American Dream, visit the MIT Press website.