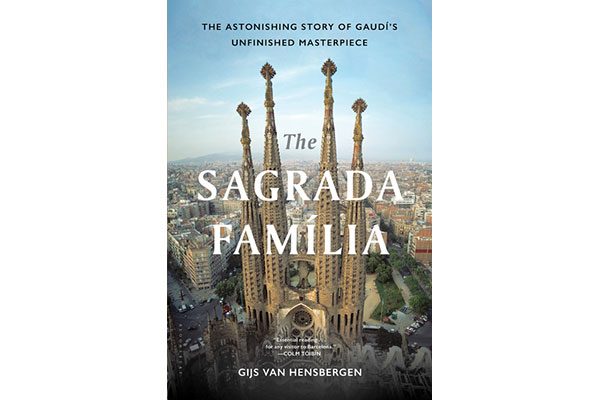 Giljs van Hensbergen has pulled off a remarkable feat, taming the monstre sacré of twentieth-century architecture without diminishing him. He takes a levelheaded and highly readable journey through the life of Antoni Gaudi, an architect loved by Dali, hated by Picasso, and now destined for sainthood.

There is not much that can be said about the Sagrada Familia that hasn’t been said already, at least according to the author of this new book from Bloomsbury Press. This privately funded cathedral is one of the planet’s longest ongoing construction sites, one of a few rare buildings to become a UNESCO World Heritage Site before even being finished. While some think it hideous and others sublime, most agree it is a marvel to behold, along with the profile it strikes in the dense Barcelona building fabric as laid out by city planner Ildefons Cerdà.

In this new book by art historian Gijs Van Hansbergen, we are given a breathtaking exposition of both the architect Antoni Gaudi and the behind-the-scene events of Sagrada—a play-by-play of all the contributors from the time before Gaudi was born in the mid-1800’s—bringing us to its current incarnation with its construction now 100% funded by the millions of people that visit it each year (construction costs are around €18 million annually).

For those in the know in the architectural community, Jordi Fauli—the current project architect of the Sagrada—has said the building will be completed in 2026, the centenary of Gaudi’s death. And as those who have been there recently know, the new stained glass lighting the central nave is now completed, a small miracle unto itself. As such, the building has thousands visiting it daily, along with Gaudi’s other works in Barcelona—Palau Guëll, Casa Battló, Casa Milà, Park Guëll, and the Sagrada school—which, together with Sagrada, are protected as UNESCO World Heritage sites.

While the book is named for the cathedral, it is really more about Gaudi himself, providing the narrative that connects all the work he did over the course of his career, along with his unwavering devotion to the Sagrada family to see his vision carried on to completion. Hensbergen skillfully weaves together all his projects, explaining how he worked on his other masterpieces like Casa Battló and Casa Milà while Sagrada continued on in the background.

The author has also done extensive research connecting the succession of architects both before and after Gaudi that have worked on the church, along with the devastating Spanish Civil War which stopped construction for almost half a century. Within Gaudi’s lifetime, he was alone able to oversee only 15-25% of its construction, with his successor Domènec Sugrañes i Gras able to realize the final three towers on the Nativity façade, leaving much still to his successors when he passed.

Several historical events in Barcelona serve as a backbone for the book, including the already mentioned Civil War, a reminder that the events currently taking place in present day Barcelona have been going on in the background for centuries. In Gaudi’s lifetime, it was the horrible Tragic Week in which Sagrada could have very well been lost (and during which time Gaudi took refuge in his house at Park Guëll), as the rioters and anarchists marching through the streets burned several convents, with over 80 religious structures in total destroyed as the Roman Catholic Church was seen as part of the bourgeoisie class which was the target of the insurrection.

Passing away as Gaudi did at 73, tragically hit by a streetcar in Barcelona’s busy streets, his accomplishments are the stuff of wonder and awe. What is perhaps less known is that the devout Catalan architect refused to abide a national edict disallowing Barcelona citizens from observing a Catalan holiday, a stubbornness which led to his spending a night in jail the year before he passed away. Such was his passion that he was able to balance a devout faith with the empiricism of his exacting profession, the resultant body of work which has now become one of the country’s national treasures, along with Alhambra and the works of Pablo Picasso, and more recently the Guggenheim in Bilbao.

We can only wonder now what Gaudi would’ve thought about computers helping to finish his project, though as Hensbergen points out at one point of the book, “Gaudi was open to all the latest innovations as long as they made sense.” Sadly, the civil unrest that continues in his native city would most likely not have surprised him, and he would’ve been devastated had he known the construction of Sagrada was shuttered during Franco’s reign of terror.

He would also be humbled to learn that he is being considered for sainthood by the current Pope and his cardinals, not just for his architecture but his commitment to the workers and parishioners surrounding his projects, whom he ensured had safe and healthy living conditions (including the Sagrada school which he built for his worker’s children). He most certainly would’ve been abashed by the title of “God’s Architect” which his admirers have adopted, and it is said that Pope Benedict XVI was visibly moved by the cathedral when he consecrated it in 2010. We will learn in the next few years whether his canonization is to be or not.

Perhaps what is most astonishing about Hensbergen’s book was his decision to have no photography or drawings, such that the text is able to transport one more readily through the building and architect’s amazing history without any distraction. As the author himself says in the opening pages: “For the reader expecting a standard guidebook with an easy route to follow, and some simple observations followed by the odd suggestion for what else to see, this is not for you. The Sagrada Familia is already so well publicized, so often visited, so often photographed that as the icon for Barcelona, it needs no introduction.”

As such, Hensbergren has done a formidable job with his subject, creating a page turning experience about an architect and his masterpiece, both a testament to this amazing structure and its creator. As such, The Sagrada Famila can take its rightful place on your bookshelf next to Vers une Architecture, Complexity and Contradiction in Architecture, and S,M,L,XL.

For more information on The Sagrada Familia, visit the Bloomsbury Press website.