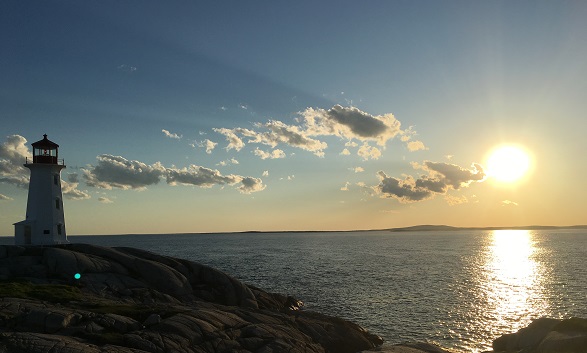 At the end of May, the Royal Architectural Institute of Canada (RAIC) held their 2018 Festival of Architecture in Saint John, New Brunswick, and celebrated the venerable organization’s 111th year. As a joint event held with the AANB for the first time since 1988, highlights included the Fellows Convocation and Keynote in the city’s old Imperial Theatre, as well as the President’s Dinner at which the RAIC Gold Medal was awarded to Montreal architects Saucier and Perrotte. With the Venice Biennale on right now (and read Aaron Betsky’s take on it here), on a much smaller scale Saint John put on its best to host some four hundred architects from all across Canada, featuring three days of seminars, awards, and convocations. Day trips of the region were also offered along with walking tours of the old city, including visits to the sea caves at St. Martins and Hopewell Rocks.

It is a pivotal moment for the old port city of Saint John (spelled without the abbreviation to avoid confusion with the other St. John’s in Newfoundland), for as up until 2016 the city’s population had been in decline for four decades, with the city’s most important asset, i.e. its young folk, leaving in droves for years to seek their fortunes elsewhere. With the opening three years ago of a new cruise ship terminal on the edge of the city’s inner harbor, mere yards away from where the record setting Marco Polo was built and launched from in 1851, the city is experiencing a bit of a renaissance. With the new terminal able to berth three ships at a time, the downtown population now surges mid-week with thousands of curious visitors, many new to the old city and its history.

For those who come may not realize they are in one of Canada’s oldest cities, incorporated in 1785, which tragically like so many other late 18th century cities, was half-consumed by a devastating fire in 1877. Saint John also has the dubious distinction that their fire was the most catastrophic, razing some 1600 structures and resulting in the need for a massive part of the busy port city needing to be quickly rebuilt. As part of the RAIC Festival, architects were toured around the downtown to look at the buildings constructed after the great fire, with a walking tour conducted by Gary Hughes, senior curator of the Museum of New Brunswick, and author of Music of the Sky: Architectural Drawings of Canada’s First City 1822-1914. 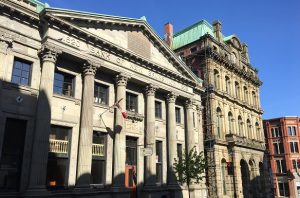 Featured on his tour were several handsome buildings of stone, brick, and cast iron, all mostly built in the Second Empire style. The walk also featured one wooden structure – an old general store predating the 1877 fire, floated on a barge from 40 kilometers away up the Saint John River to its current location in Market Square after the great fire. Gary explained how quickly the new Saint John needed to be rebuilt, being one of the busiest ship building ports on the eastern seaboard, with a need to hastily rebuild the market on King’s Square, along with the nearby Trinity Church, completed in 1881.

In addition to the seminar on the great fire, others included more topical subjects such as two on Passive House given by member’s of Stantec’s Vancouver office, along with two BIM seminars looking at interoperability and in-house training. The Festival’s opening reception, following the AGM at the Hilton, was held in Market Square, an indoor atrium next to the harbour, between the civic convention centre and a re-purposed brick warehouse – once home to marine merchants, now a museum, library, and row of restaurants and local ale houses.

With the distance between the harbor and King’s Square a comfortable three city blocks, Saint John is a very walkable city – on its north side lined with new modern buildings which march up the hill to the Square, built over the course of the 1970’s and including Brunswick Square, comprised of a three-storey commercial podium from which rises a few mid-rise office towers, including the tallest tower in the city, all connected by the longest indoor pedway in Atlantic Canada. On the south side of King’s street is the old city, with the original 1879 city hall along with several other heritage Second Empire structures, including the already mentioned Trinity Church, whose spire rises to 210 feet, making it one of Saint John’s tallest structures. This older part of town is also where can be found some of the city’s best restaurants, including a local coffee house called Rogue tucked down not one but two alleyways. 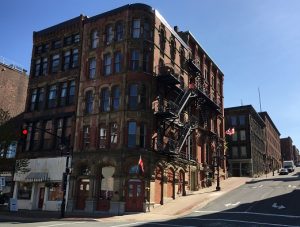 The South side is also home to a bit of a curiosity, a ghost of a building that was once part of the downtown fabric and is now gone. The site of the former Customs House on Prince William Street, directly across from the new cruise ship terminal, is now home to a surface parking lot. Called at the time of its construction “the finest building of its kind in America and second to only a few in the world” it is a travesty that all that remains now are some of the building’s foundations excavated at the rear of the site. Constructed after the great fire to replace the previous customs house on the same spot, it stood until 1960 when it was abandoned as the government offices had moved into a newer, more modern building next door. Its demolition caused enough of a stir that it started the architectural heritage movement in Saint John, in many ways responsible for the preserved city one sees today.

Also on King’s Square is the old Bank of Nova Scotia building, a proud post-1877 Great Fire structure whose ground floor hall is now used by the University of New Brunswick. This Grand Hall provided for the perfect locale to gather following the Fellows Convocation held on the third night of the RAIC Festival, itself held at the old 1913 Imperial Theatre across the square. Without a doubt, the highlight of the Fellows Convocation and the entire Festival was the keynote given by Francis Kéré, at which he expressed gratitude to all gathered to be able to show us his work. Along with his award winning 2007 Dano Secondary School in Burkina Faso, designed and built with his fellow villagers, he showed us more current projects including another school he did for the Aga Khan, as well as his design for last year’s much celebrated Serpentine Gallery.

The most inspirational moment of Kéré’s talk came when he put up a picture of himself and his villagers standing on a mock-up of a brick arch he had constructed with them, after showing them first how to dig, cut, and shape the brick. It is an astonishing story, made more so by his observation that as an oral culture, if it had collapsed his people would’ve passed the story on for generations. But of course, the arch held and became the barrel vault for the school he built with his village, and which still stands today. 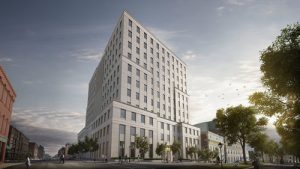 Following Kéré’s talk, the Fellows and others assembled at the Imperial were able to see outside firsthand the latest addition to the Saint John skyline, built on the remediated site of an old Irving filling station, the business that made the family its fortune. Rising from the corner site next to the Imperial, and now nearing completion, is the new eleven storey Irving tower, to be the new Saint John head office for the local family run corporation. With only a handful of towers in the city located between Market and Brunswick Square, it is the first tall building to be constructed in over a quarter century, and one of the few new buildings of its size to be built in some time. An exception is the city’s new harborfront stadium, completed shortly before the cruise ship terminal opened in 2015. Itself standing on the site of the city’s now demolished Canadian Pacific train station, which succumbed to the wrecking ball in the 1980’s, its recent construction along with the new Irving tower is an indication that Saint John may at long last be emerging from its doldrums.

Leaving New Brunswick and the Bay of Fundy, traveling east into Nova Scotia and right to the edge of the Atlantic, the port city of Halifax is currently seeing a different kind of growth than Saint John. For some time, the downtown of Halifax has sat perched below the crest of Fort George, better known as Citadel Hill. On the hill above the old town clock, the city’s most beloved (and photographed) landmark, the city has since time immemorial prevented the obstruction of the harbor from atop the Citadel, with the one rare exception being the construction of the Maritime Centre in 1977, a now Brutalist gem with a long vertical concrete slab, situated so as to minimize the obstruction of the harbor from the top of the city. 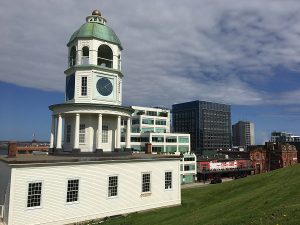 It would appear that with the recent construction of the new Halifax convention centre with its adjunct office towers (including BMO’s new digs) has created a spot zoning free-for-all. I counted as many as three new residential towers under construction or already built in the city’s downtown core, next to endangered Second Empire treasures on Barrington Street, and only blocks away from the old City Hall and St. Paul’s church. It would appear Halifax is having its moment in the sun with business and residents alike moving back to the downtown core, but it appears it too is making the same mistakes that Vancouver did around English Bay in the 1960’s, where large slabs of residential towers were allowed to be built and then were immediately regulated against.

All is not lost however in the Maritime’s largest city, as a new downtown library by Danish firm Schmidt Hammer Lassen with local firm Fowler Bauld Mitchell has made quite the impression. Located next to the Dalhousie School of Architecture on Spring Garden Road, this new building was very busy during my visit, with a flurry of activity on an otherwise typical Monday afternoon, apparently a new popular hangout for students, locals, and tourists alike. And with a new building under construction on the waterfront next to the Maritime Museum by MacKay-Lyons Sweetapple, there is light at the end of the tunnel from Halifax’s run in with spot-zoning. 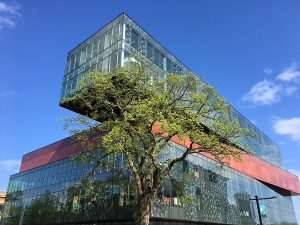 And what trip to Halifax would be complete without a quick side trip to Peggy’s Cove, a mere thirty minutes away from the downtown, where one is left speechless in the beauty and majesty of this tiny fishing village lashed to the rocks next to the relentless, pounding surf. With the lighthouse now automated like so many others around the world, it along with the small village is a reminder of a simpler time when architecture was an exercise in restraint, when every detail spoke volumes, and how the structures we erected were but passing signposts of our times, vulnerable to the flames of our rapid growth, and which we at best could hope to stand for a stint of time before all again is washed to the sea.