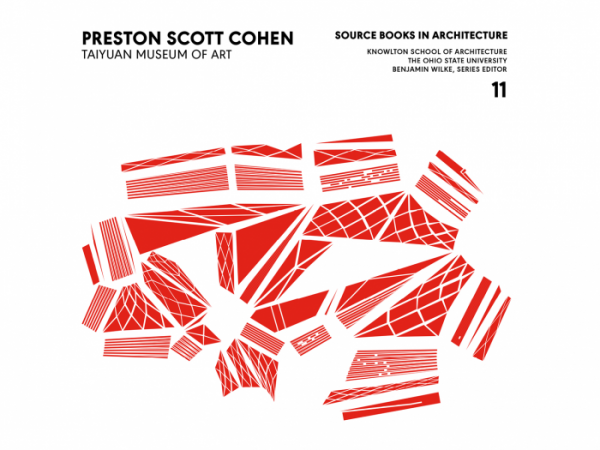 Preston Scott Cohen has built a distinctive design language on the convergence of geometry and construction. His work reminds us that architecture is a complex intellectual labor, carried out with highly specific tools, and at the same time, it is never reducible to the catalogue of those tools or techniques. As the work assembled here demonstrates, Scott Cohen takes equal pleasure in design process – drawings, computer modeling, and the play of projective geometries – as he does in all of those effects that are only possible in a realized building: light and shadow, the changing parallax of a spectator moving through actual space, materials and details.

— Stan Allen, from the Introduction

There are times when we would do well to remind ourselves of what is fleeting versus what is eternal. As current events play out on the socio-political stage and our televisions, some bordering on the cruel and absurd, we should not forget that this too shall pass. What matters most is that which puts all else into perspective – the sublime and the spiritual. It is the tragic irony of our time that in our ultimate search for universal truth we have arrived at the nadir of the lowest common denominator, having perhaps lost along the way some idea of a nobler human spirit. It is at times like these when I like to reflect on the timelessness of architecture, of its gravitas and history.

And so while we await the world to revert back to normal it is comforting to know that architectural theory has soldiered on, far from the madding crowd, especially so in the hallowed halls of our architectural schools. As the eleventh book in this series from the Knowlton School of Architecture at Ohio State University, Preston Scott Cohen: Taiyuan Museum of Art features, among others, architectural theory luminaries Stan Allen and Jeffrey Kipnis. Edited by Benjamin Wilke with book design by Pablo Mandel, this latest book in the series focuses on Preston Scott Cohen’s Taiyuan Museum of Art, which opened in 2013.

As a side note, in Spacing’s 2015 review of Clare Jacobson’s New Museums in China, featuring 31 new museums then being realized in China, it was noted that this was itself just a sampling of several hundreds of them being built at that time in what could be called China’s second great cultural revolution. Part vestige of the Bilbao effect, part frenzy around the Beijing Olympics, hundreds if not thousands of cities with large urban populations of one million plus inhabitants had created a need for this building type, and among the other thirty featured in the book, Mr. Scott Cohen’s Taiyuan Museum had just opened the year before.

Delivered as a consistently high quality publication, the Source Book in Architecture series offers an opportunity to experience the subject architect and their work through a series of interviews with the students and faculty from the Knowlton Architecture School in Ohio, made possible through the Herbert Baumer Distinguished Visiting Professor program, of which Scott Cohen was the recipient in 2014-15. Others in the series have included ones on Stan Allen, Eric Owen Moss (which Spacing reviewed here), Peter Eisenman (who was Scott Cohen’s mentor), the late Zaha Hadid, Steven Holl, Morphosis and more.

With commentary provided by Doug Graf and Kristy Balliet, along with an introduction by Stan Allen, a series of interviews called the Baumer Sessions allows one to informally converse with Scott Cohen, with an explanation of his own unique understanding of architecture, as seen through the lens of projective geometry, and how his architecture is the continuation of a narrative whose past contributors have included Peter Eisenman and John Hejduk. And while he gives brief descriptions of the houses and other large institutional projects that have defined his career, including his award winning Tev Aviv museum of art, it his comments of what architecture is, summing up one hundred years of architectural theory into one paragraph:

With the book’s cover featuring the cladding patterns for all sides of the building, this highly evocative graphic represents much of the architect’s philosophy, looking at the collision between deep architectural theory and its material execution. Without a doubt, the book’s high watermark is the interview between the book’s editor, Benjamin Wilke, and Jeffrey Kipnis, who has known Scott Cohen since he was a student. He further offers the explanation of how the first part of Scott Cohen’s career was a highly insular pursuit, paper architecture really, immediately followed by a succession of winning commissions and building buildings, with no subtle transition in between. The result is an architecture that is highly idiosyncratic, with a distinct geometry and formal language that is truly his own.

For the Taiyuan Museum, the architect made the massive program of 32,500 square meters coherent through a figure eight plan, a continuous ribbon of circulation that created two large interior courtyard spaces, such that gallery spaces could look into each other. The building’s most dramatic moment is a cantilevering restaurant over the building’s entry forecourt, a similar move to the one Zaha Hadid made with the MAXXI in Rome.

As for the host city itself, Robery Livesly opens his essay ‘Cohen in Taiyuan’ with a passage from T.S. Eliot’s The Wasteland, remarking how this modest sized Chinese city of 4.2 million was built in an instant like so many others: “Composed of twenty and thirty story buildings, the town is a midrise hell. All of the cultural buildings, isolated on an island among wasteland plazas, compete for attention. There are no surprises – it is just big.”

With over half the book consisting of rich visuals of the building in both plan and section, drawings and photos, the remainder of the book provides an erudite commentary by many important current voices of architectural theory, voices that will continue on despite the madness of our present politicking. And we can look forward to future Baumer Sessions from the Knowlton School, including the upcoming one on Neil Denari, up next in the series.

As an informative exposition on Preston Scott Cohen’s work, this latest in the series is a must have for both the student and professional alike. Visit the Knowlton School website for more information on the book series.