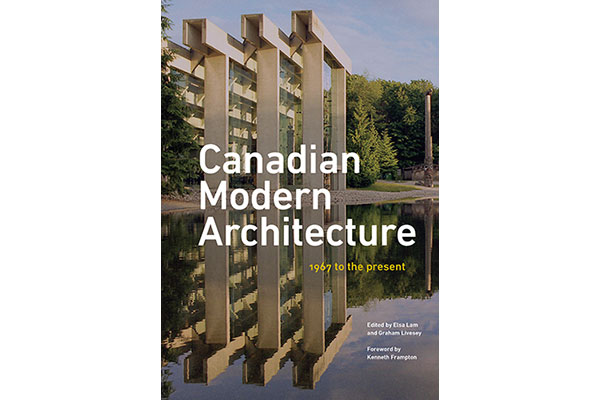 This anthology comprises the contributions of seventeen scholars representing successive generations of Canadian intellectuals in the field, ranging from academics to critics and to architects and, in many instances, individuals who are all three. By any standards, this is an encyclopedic tour de force documenting fifty years of Canadian architectural production across the expanses of what is still a sparsely populated continent.

Throughout history, every generation of architects has had its respective history teachers from which to learn their profession. In ancient times there was Vitruvius, the Renaissance had Palladio, and prior to Modernism, there was the great French architect and theorist Eugene Viollet-le-Duc, who we lost a second time when his crossing-topping spire tragically succumbed to the flames of the fire at Notre Dame cathedral last year. Fortunately, he has many other surviving structures, but equally as important is the writing he has left to us, notably his Dictionnaire Raisonne, (1854) which along with John Ruskin’s Seven Lamps of Architecture (1880) would become the swan song of nineteenth-century Rationalism and Romanticism.

For the twentieth century indisputably belongs to Modernism, during which time the architecture historians were also the architects themselves – Le Corbusier’s Towards an Architecture (1927) and Frank Lloyd Wright’s The Future of Architecture (1953) being notable examples. The Postmodern age also gave us several treatises that have become part of every architect’s education, starting with Robert Venturi’s Complexity and Contradiction in Architecture (1966) and running up to Rem Koolhaas’ Delirious New York (1994).

And during this time of Covid-19 uncertainty, we need our architecture historians more than ever, not just to document the recent past and present, but to comment on the here-and-now, what will become known as the ‘Age of Covid.’ As such, figures like Kenneth Frampton shine brightly in the pandemic fog, providing us with the assurance that the home fires are still burning, that the architecture flag is still flying, and that yet another generation will be able to learn their history lessons lest they repeat it. His Modern Architecture: A Critical History (1980) was required reading in architecture history at UBC in the late 1990s, and would’ve been responsible for educating an entire generation of architects here on the west coast.

And while south of the border, where several generations of architects have had the benefit of learning from such historians as Siegfried Giedeon, Reyner Banham, and Lewis Mumford, in Canada there remains a disappointingly thin selection of architecture texts to teach our architects, as recently noted in Trevor Boddy’s Canadian Architect review of this new book. While several have noted Harold Kalman’s A Concise History of Canadian Architecture (2000) as the point of departure for this new book edited by Elsa Lam and Graham Livesey, there have been along the way some notable exceptions, including Andrew Gruft’s Substance Over Spectacle (2004), which attempted to give a snapshot of its time featuring work from across the country.

In particular, Gruft’s list of contributors to the book featured two essays written by Sherry McKay and Marco Polo, who also appear here in Elsa and Graham’s new book. In my reading of this new history, the optimism of their essays from over fifteen years ago reflects the continued spirit of regional resilience and collaboration that characterizes much of Canadian Modern Architecture. Elsa and Graham also would’ve witnessed this first hand during their nation-wide book launch, with events in cities from Vancouver to Halifax. Sadly, our current reality has cut the book launches short, so I was fortunate to have been able to go to the one in Vancouver, held at the main branch of the Vancouver Public Library in late 2019.

Of the many things discussed at the Vancouver book launch, which featured a panel discussion between Elsa, John Patkau, James Cheng, and Sherry McKay, was the decision to choose the particular timeframe for the book – from 1967 to the present. It was observed that while the first two decades after Montreal’s Expo ’67 provided the nation’s most heroic architecture moments, the decades that followed them have only had a few architectural high notes. Why this has been the case became the theme of the Vancouver book launch – it would be good to hear if the panel discussions in the other cities noted the same, perhaps something that could be the subject of a future essay in Canadian Architect.

For as has been noted in several other reviews of the book, Canadian Modern Architecture is the benefactor of many things—also noted in Frampton’s introduction—having as it does three past editors of our national magazine, along with its current editor. The remaining essayists consist of many past contributors to the magazine from over the years, as well as several noted architectural educators from across the country.

The result is not unlike Frampton’s Modern Architecture, with each chapter issue-based more than about any particular style or region. It makes for an interesting depiction of the nation’s built history, putting it above and beyond the simple need to function as a reference book. By deciding to be non-chronological, one can more readily see the thread connecting such architecture as Safdie’s Habitat 67 and Erickson and Massey’s SFU campus atop Mount Burnaby, despite their geographical distance from each other.

Consisting of fifteen essays, and pivoting around many great national moments starting with the aforementioned Expo ’67, the book begins with a discussion about the importance of the Centennial projects. Written by Marco Polo and Colin Ripley, their essay looks at such projects as the National Arts Centre, followed by a section devoted to the pavilions of Expo ’67 itself. Following this, George Thomas Kapelos’ chapter looks at many recent projects in Ottawa, including the National Gallery Museum and Canadian War Museum, alongside the new Museum for Human Rights in Winnipeg. The remainder of his essay looks at the architecture of civic centres, city halls, and airports across the country, and closing with a discussion of the legacy and differences between the Olympic Games held in Montreal and Vancouver.

The next section in the book, specifically on campus architecture, provides for Lisa Landrum’s essay to cover the entirety of the nation, from Erickson and Massey’s SFU in Burnaby to Ron Thom’s Trent University, buildings that set the bar high for campus architecture in the years to follow. Several notable ones are as well featured here, starting with Richard Henriquez’s addition at Trent in 1991 and bringing us to the present-day with Snohetta and Zeidler’s recent addition to the Ryerson campus in Toronto.

The book’s first quarter, entitled ‘National Movements’, appropriately ends with a chapter devoted to First Nations architecture, penned by Odile Henault, and featuring such projects as the Squamish Lil’wat Centre in Whistler, along with the Nk’Mip Visitor Centre in Osoyoos. Her contribution provides the book’s tone of optimism, that Canada as a nation can heal and learn through Truth and Reconciliation, and sets the bar high for the chapters to follow, with the next three sections of the book entitled ‘International Influences,’ ‘Regional Responses,’ and ‘Centers of Influence.’

When I asked Elsa what motivated her and Graham most to write the book, she had the following to say:

Graham Livesey and I undertook this project because there wasn’t really a good volume covering this important period in Canadian architecture. We thought of it initially as a resource for teaching Canadian architectural history, but soon expanded our ambition, with the idea that it would be valuable for the larger architectural community in Canada. Histories help us to get a sense of where we’ve come from, and how what we’re doing fits in with a bigger picture.

She also commented on the importance of the book launches:

The launch events became a project in themselves – we did over a dozen events across Canada, and they’ve spurred really interesting conversations about the character and future of Canadian architecture. Based on the positive and thoughtful feedback we’ve received from architects, architecture professors, and students, we feel that we’ve accomplished what we set out to do.

As such, Canadian Modern Architecture is set to become the new go-to text of our country’s recent architectural achievements and a much-appreciated narrative with which to educate the upcoming generation of architects. Likewise, for the architect currently working from home and perhaps re-reading some of our profession’s greatest writers, this book provides a vast spectrum of Canadian expertise upon which to draw and will be quite at home sitting on their bookshelves between Frampton and Scully.

Immaculately researched and executed, this is a book for our time and for all time.