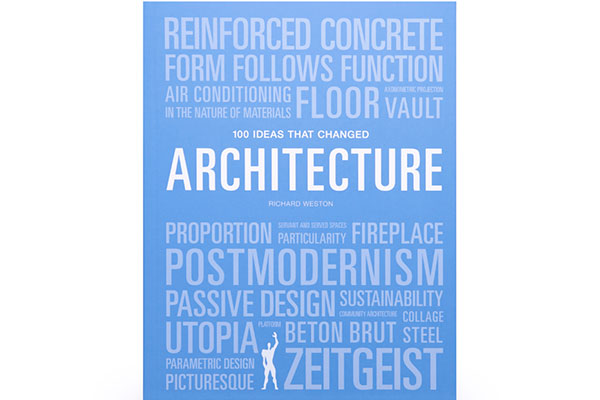 This book’s title poses two obvious questions: what is an architectural ‘idea’, and how were the 100 ideas it discusses and illustrates chosen and organized? This book is intended to be a widely accessible and engaging introduction to the broad spectrum of ideas that shape architecture – Richard Weston

Much like the hugely popular 101 Things I Learned in Architecture School, this book from Laurence King Publishing and authored by Richard Weston condenses the discipline of architecture into 100 ideas that will resonate with both seasoned professionals and architecture students alike. As part of a larger series on design featuring such titles as Fashion, Graphic Design, and Photography, each book shares a similar format providing a two-page spread with one full page image and one page of text for each idea, accompanied by an erudite micro-essay on each particular subject.

Most certainly a challenge for each book’s author—to encapsulate a design discipline, including ‘design’ itself, into not just a simple description, but how the part is an essential piece of a greater whole. As a result, this volume of 100 Ideas has been broken into several kinds of ideas, starting with elements, progressing to building materials, and finishing with contemporary issues. Peppered throughout are architectural movements, which the book’s author has arranged chronologically.

The resultant book is also, as it turns out, a smaller part of a greater whole, and an integral part of the book series itself, featuring as it does more broader subjects like Art and Design, architecture understandably playing a fundamental role in the collection. And Weston has done a good job to scratch the surface of each idea without going overboard, conveying it in an easy vernacular as he would’ve done during his years as an architecture professor at Cardiff University. Other books of his include one on Danish architect Jorn Utzon and a monograph on Alvar Aalto.

Scanning the table of contents, one finds the book beginning with fundamental building elements, with number one being the most primal—Fireplace—followed by Floor, Wall, Window, etc. Notions that have emerged out of architecture itself include Form, Proportion, and Ornament, and make up ideas nineteen to thirty. Idea 28 is the notion of the Architect itself, accompanied unsurprisingly by a picture of Le Corbusier. Weston points out that the Swiss master, with no formal training as an architect, provides for many of the book’s source ideas, which continue to influence the profession today.

Several other notions that are a part of every architect’s training are here as well, including Vitruvius’ Commodity, Firmness and Delight (Idea 26), Abbe Laugier’s Primitive Hut (Idea 36), Louis Sullivan’s Form Follows Function (Idea 57), and the aforementioned Le Corbusier’s Five Points of Architecture (Idea 82). More contemporary notions are also here which may be new to the architecturally uninitiated, including Less is More, Complexity and Contradiction, and Deconstructivism. This final notion fits into the last ten ideas of the book between Passive Design, Rainscreen Cladding, and Universal Design. And the last few ideas include even more cutting edge notions intended for current architecture students, such as Fold, Bigness, and Parametric Design.

Larger themes occur throughout the book in more or less chronological order – movements particular to architecture itself include Palladianism (Idea 34), Beaux-Arts (Idea 41), and Regionalism (Idea 75). Larger movements that affected not only architecture but art and culture are here too, such as Humanism (Idea 18), Modernity (Idea 60), and Postmodernism (Idea 81). The overall effect is a book that allows the reader to connect their own dots, with so much visual reference at one’s fingertips in an easy-to-navigate format.

There are also parts of the book where Weston organically allows each idea to branch out, such as with Idea number ten—Arch—which is followed by Vault, Dome, and Arcade, all variations upon the idea of an arch. Similarly, Robert Venturi’s notion of a Decorated Shed (Idea 83) follows from both his idea of Complexity and Contradiction, and by the larger notion of Postmodernism.

The book also shows the significance of modern materials in the more recent history of architecture, as the first half of the book contains only a single mention of Brick, whereas starting at idea number forty, Iron, Glass, Steel and Reinforced Concrete are featured to show their transformative effect on our built culture.

More modern conveniences that were equally revolutionary are here, including the Structural Frame, Central Heating, Electric Lighting, and perhaps the most transformative of all, the Lift (Idea 49). As the mid-point in the book, the author uses the elevator as an inflection point for architecture itself, pointing out as he does how it is an ancient notion from Roman times, only becoming practical when Otis patented his version in 1852.

The Lift could also perhaps be representative as the most archetypal idea in the book, as it is neither ephemeral like Scenography nor overly-academic like Phenomenology, providing instead a concrete example of how an idea can overcome the challenges of navigating space in the real world. Other ideas like Air Conditioning resonate as ways building designers have overcome physical challenges in particular places over time, providing the reader with a quick understanding of how important these milestones were to the history of architecture.

A compelling read as well as an indispensable guidebook, this new collection from Laurence King Publishing is sure to become a ground-breaking series on Art and Design, with 100 Ideas that Changed Architecture a fitting companion to other similar series like 100 Diagrams that Changed the World, and should be on the bookshelf of every architect as a quick and easy reference.

For more information on 100 Ideas that Changed Architecture, go to the Laurence King Publishing website.