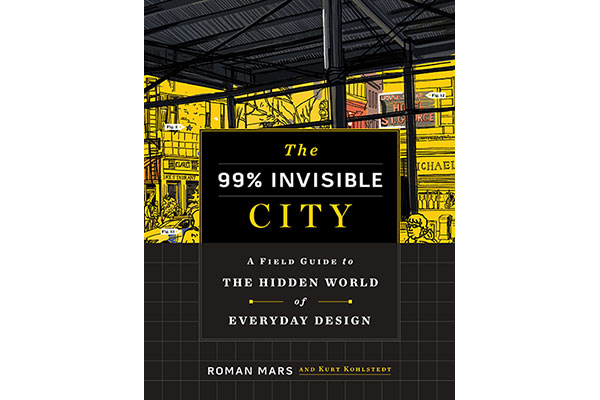 It is not a stretch to say that most contemporary urbanists have come across the 99% Invisible radio show at some point over the past decade. Since its start in 2010 as a collaborative initiative between the San Francisco public radio station KALW and the American Institute of Architects in San Francisco, the show that seeks to unearth and explain the many interesting, hidden aspects that shape the built world has grown to be one of the most popular podcasts on iTunes.

Covering an incredible diversity of topics gathered over its many years—ranging from architecture to technology and objects to history—it was only a matter of time before the decision to publish was made…and The 99% Invisible City: A Field Guide to the Hidden World of Everyday Design will not disappoint both its followers and newcomers, alike.

Given the diversity and density of topics they were working with, authors Mars and Kohlstedt settled on a book format very sympathetic to their show—that is, giving readers a series of short two-to-four page stories of fascinating ‘ordinary’ and ‘overlooked’ stuff related to the city. These are organized under the broad categories of Inconspicuous, Conspicuous, Infrastructure, Architecture, Geography and Urbanism, then further within subcategories related to the latter.

For example, Inconspicuous is broken down further into Ubiquitous, Camouflage and Accretions within which a number of short stories belong. Inconspicuous> Ubiquitous includes four short stories—one on the many utility codes littering the streets of our cities (Official Graffiti) , another on sidewalk markings (Initialed Impressions), followed by a short history of breakaway posts (Planned Failure) and finally a story looking at the emergency ‘Knox Boxes’ that sit beside entries of countless buildings (A Little Safer).

The number of stories within each subcategory varies and with 125 stories in total, there is plenty to keep the geeky urbanist satiated. The structure of the book also allows for a more freeform approach to reading the book. In the words of the authors, ‘…there’s no reason why you can’t pick and choose the path through the book that suits your own journey…’—strolling idly through the content like a flâneur across the city.

The beautiful illustrations of Patrick Vale peppered across the content give the book a feel well in keeping with the quirky, informal stories covered in 99% Invisible—an artifact perfectly complementing its digital counterpart.

Given the nature and breadth of the content, an in-depth look at everything covered within the book is well beyond what this quick review can cover, but I will share some of my favourite themes covered—beyond the utility code story markings mentioned above that I’ve always wondered about:

Mars and Kohlstedt offer The 99% Invisible City as an incomplete guide, but as you can see it covers an impressive breadth of fascinating ground. And with the popularity of 99% Invisible on the rise, I’m sure—I hope—there are other publications on the horizon.

Overall, The 99% Invisible City: A Field Guide to the Hidden World of Everyday Design enlightens as much as it delights. Perhaps more importantly, however, it fosters a sense of curiosity for the everyday we take for granted. Echoing the sentiments of renowned historian John Stilgoe, outside lies magic…and Mars and Kohlstedt are the perfect guides.

For more information on the The 99% Invisible City visit HMH website. And for those who have never heard the radio show, be sure to take in the incredible content at 99% Invisible.