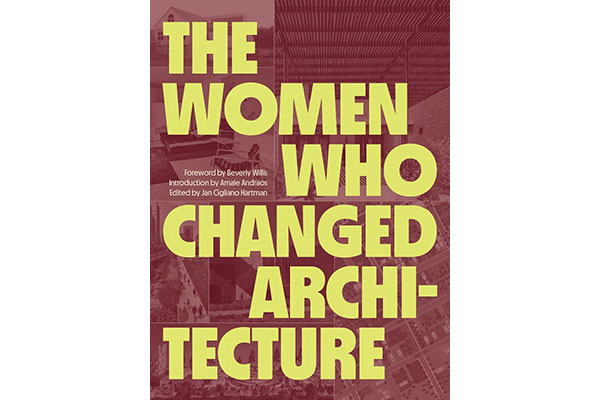 The Women Who Changed Architecture establishes a comprehensive and encyclopedic record of pioneering women in architecture, from 1881 to 2021. Although presenting an unprecedented record of these remarkable individuals, together with their revolutionary educations, innovations, awards, and influential design, the book, no doubt, has inadvertently overlooked individuals. The record will continue to grow and develop.

With March being International Women’s month, Princeton Architecture Press has released this new 336-page book, an astonishing realization of nine editorial contributors and 122 featured architects, among them Beverly Willis FAIA, co-founder of the National Building Museum in Washington, DC. With the three main editors providing opening text for the book, one explains how it is intended as a living document and a good start, while another explains the list has been parsed by generation, with women getting the right to vote in America a key inflection point to those practicing before and after.

Including the work of architects from some 28 countries, there are also six past Pritzker winners here, with the duo Yvonne Farrell and Shelley McNamara being the most recent recipients in 2020. Six Canadian architects are also here, including Phyllis Lambert, Blanche Lemco van Ginkel, Patricia Patkau, Shirley Blumberg, Brigitte Shim, and Meg Graham.

Notable omissions include Ray Eames and Aino Aalto, along with Jane Jacobs and Ada Louise Huxtable. And while the last two technically weren’t architects, each contributed in their own way to the field in its teaching, history and theory. With this in mind, perhaps a future edition could include important contributors to the profession who weren’t architects.

In this same spirit, perhaps a section just on Canadian architects could also be added to a future edition of the book, broken down regionally so it could include such local pioneers as Leonora Markovich, the fifth female architect to be registered in British Columbia in 1950, and the sole female architect to have her own successful practice in her day, realizing such landmark projects as Langara Gardens in south Vancouver in 1970.

And while my own education as an architect has included learning about such individuals as Eileen Gray and Lilly Reich in school, new to me were the many female architects listed in the first two chapters of the book, entitled appropriately Groundbreakers and Paving New Paths. Including such amazing individuals as Marion Mahony Griffin—who worked the majority of her career with Frank Lloyd Wright and was considered to be one of the best American architects of her generation—it is not unreasonable to suggest that many architecture schools in North America are rethinking their curricula in our current #MeToo age.

Admittedly, I did not know the first five architects–Louise Blanchard Bethune, Signe Hornborg, Lois Howe, Theodate Pope Riddle, and Mary Colter–and was moved by their respective stories, each a trailblazer fueled by their pure passion for architecture, defying all social norms and conventions of their day. It is an inspirational book for this reason, and demonstrates that while our profession has come a long way, if nothing else, more recent historical events have highlighted that there is still a ways to go yet.

Each architect is given at minimum two-pages, including representative projects and a one-page bio, with such individuals as Patricia Patkau and Zaha Hadid—aptly featured side by side in the Rocking the World chapter—given four pages each to highlight their extensive work. With Patkau representing all of Western Canada in this book—her Audain Art Museum in Whistler a highlight of her section—a chapter just on this region could be a future chapter all on its own, one that could include such architects as Stephanie Robb, Heather Howat, and Johanna Hurme, along with many, many others. The same can be said, of course, of other regions in Canada.

The remaining four chapters of the book—Advancing the Agenda, Rocking the World, Raising the Roof, and Innovating for a Better World—are each given their own introduction by one of the six co-editors of the book, a brief rationale for the architects in their grouping. In the fifth chapter, Julia Gamolina admits her category is for architects that defy categorization, such as Maya Lin and Jeanne Gang, with the preceding chapter representing key architects who came of age in the 1960s and 70s, including the aforementioned Zaha Hadid and Patricia Patkau, along with Billie Tsien, Peggy Deamer, and Toshiko Mori.

Overall, the book is a comprehensive collection of current and cutting-edge design, along with their historical precedents, and long overdue to have so many important contributors to architecture in one place. It should be on the bookshelf of every architect, for as contributing editor Amale Andraos notes, “this book enables us to build a new lens through which to understand the struggles and successes of women architects not in a vacuum, but taken together, across time and place, as they decenter and recenter the field around their ideas and practices.”

For more information on The Women Who Changed Architecture and its authors, go to the Princeton Architectural Press website.