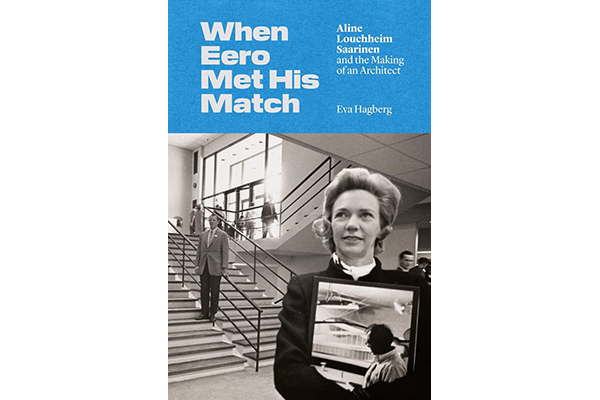 Today, I think about Aline’s contributions to the field, and to the practice and publicity of architecture. I see traces of her work everywhere, in the way in which I email with my colleagues, in the way in which my colleagues email with me. Perhaps there is something to be said for the way in which we keep repeating professional and personal behaviors; just as Aline and Eero fell in love, so do we… and so I have tried, here, to write a book that works as a piece of history. But I have also tried to write a book that reminds us that so much of what we take as history has happened because of two people, who loved each other. – Eva Hagberg

In recent years, there have been a number of publications on architects and their life partners, with Loving Frank (2008) telling the story of Mameh Cheney and her relationship with Frank Lloyd Wright in 1907, along with The Women (2009) which includes the perspective as well of his three wives. And even more recently in the world of film, in 2020 the ADFF featured Aalto, an intimate portrayal of Alvar Aalto and his first wife Aino, with whom he had both a personal and professional relationship.

But perhaps one of the most famous—if also mostly unknown—romantic correspondences is that between Finnish-American architect Eero Saarinen and his second wife Aline Loucheim, written while they were courting in 1953, and now a part of the Smithsonian since 1981. As such, these letters have been in the public realm and studied by architectural historians over the years. However not until now, in Eva Hagberg’s When Eero Met His Match, has the subject matter been given such a personal interpretation.

Perhaps best known for his TWA terminal at JFK airport (recently converted into a 512-room hotel), Eero Saarinen is the architect who, it is said, took Jorn Utzon’s design for the Sydney Opera House off the scrap heap when he and the jury were selecting the winning commission, and one look at his soaring ‘bird’ in New York and one understands why. Perhaps less known by most is that he designed the St. Louis Gateway Arch in Missouri, and for this reason, he is thought of as one of the last great monument architects.

Reading the book, one almost forgets that the great canon of modern architects—Frank Lloyd Wright, Le Corbusier, Mies—were his contemporaries, and his work along with theirs in the mid-century is an inflection in architectural history, such that even his more minor buildings, like the beautiful chapel he did at MIT (also where his memorial took place), are even more important to re-examine. Despite this, Hagberg says the book is not meant as an architecture history lesson, preferring to highlight the more emotional impact of his work through his correspondence with Loucheim.

For while the title might suggest otherwise, this is Aline’s book, perhaps best demonstrated in the opening pages where Hagberg provides a brief history of each of the book’s protagonists—Eero gets two pages and Aline sixty, though really the whole of the book is hers. Through careful research and cross-referencing, Hagberg has given us a reconstruction of the life and career of Aline Loucheim, with particular attention spent on the time between 1953 when she first interviewed Saarinen for the New York Times, up to and after his sudden death in 1961.

As well as an homage to Aline, Hagberg also has provided us a glimpse into the world of being an architectural publicist, having represented several architects and written for various magazines since graduating from Princeton architecture in 2008. She sees Aline as a trailblazer in her field, who—first through her influence as associate art editor at the New York Times, and later as Head of Information Services at Saarinen and Associates—understood the importance of crafting the brand for a building. As an example, Hagberg demonstrates how Aline shaped the narrative around the bird metaphor of his TWA project.

In addition to providing a glimpse into the world of architectural publicity, Hagberg’s narrative is at times a confessional—recounting her own personal health challenges, divorce, emotional exhaustion, and how her research into the love letters between Aline and Eero was the only thing keeping her going at times. Recreating a whole person from an epistolary exchange, Hagberg found in Aline a muse and inspiration for her own career and has done an admirable job of bringing her back to life in these pages. The book could also be said to be an homage to writing in general, to a time when letters, newspapers, and magazines were all that we had, before the ubiquity of the internet and telephones.

For as Hagberg explains in her preface, this is a love story and not an architectural one. So, instead of numerous colour illustrations of the half dozen buildings that are mentioned in their letters, the book focuses on the language in their exchanges, not just in the Smithsonian letters, but also the exchanges between Aline and the various editors who were in her circle of influence, including two of the most influential American architectural magazines of the day – Architectural Record and Architectural Forum.

The book then features perfunctory black-and-white images in lieu of glossy colour ones, with the occasional rare glimpse of the couple together frolicking on a boat or at a gallery opening, even one from their low-key wedding in 1954. Hagberg also has included scans of some of the letters themselves, including a Valentine sent to Eero from Aline. The romantic content provides the point of departure for the book’s structure, which then opens up to a story of how Loucheim improved on the messaging of Saarinen’s buildings, from his Kresge Auditorium at MIT, to his Ingalls Ice Rink at Yale, and finally to his TWA Terminal.

Told in eight chapters, the book starts with Women in the Design World, an important exposition on other famous architects and their partners, including the aforementioned Frank Lloyd Wright and his third wife Olgivanna, who carried on his legacy after his death much as Aline did with Eero. Also discussed are the legacies of Walter and Ise Gropius, with the latter sacrificing her own identity to her Bauhaus founding husband. The chapter as well includes contributions from current Architectural Record editor-in-chief Cathleen McGuigan and Alexandra Lange.

The second chapter – When Aline Met Eero – is the book’s Rosetta Stone, as Hagberg recounts being first introduced to the love letters by accident, and quickly determining she would use them for the basis of her 2015 dissertation at Berkeley. We are here the benefactors of this enterprise, with a book that challenges us as architects to see how influential the message is to our work, certainly the public’s interpretation. The book also provides a layperson’s view of architecture, and specifically, of Saarinen’s career, cut all too short, and who should get his due again (he was on Time’s cover in 1956). Eva admits early in the book that as she is not an architect by trade, she has been able to come to appreciate Saarinen’s work by seeing it through Aline’s eyes.

The remainder of the book then oscillates between shorter, more autobiographical chapters, such as Why Fame? and On the Loss of a Client and Friend, to those devoted to Hagberg’s research, examining how Aline’s messaging for Eero changed as their relationship changed from professional to personal, and back to professional again. Perhaps the most emotionally raw part of the book comes near the end when it is apparent that Aline had to continue on as the spokesperson for the firm at the same time as she was grieving the loss of Eero.

And much as Aline created the phrase “bones of a bird” to describe Eero’s TWA terminal, perhaps in this labour of love, there is the bones of a movie that could soon show up alongside other forthcoming features on Mies van der Rohe and Edith Farnsworth. In the meantime, there is something here for everyone in When Eero Met His Match, with an epilogue including a mention of the recent opening of the TWA Hotel.

Both personal and academic, literary and historical, the book has at its core the emotional and creative force of nature that Aline and Eero represented. For this reason, it simultaneously inspires us at the same time as it is a solemn reminder of the brevity of life and love, and so no one will come away from Eva’s text here unmoved and unshaken.

In the end, it is a story told for Aline, and to give her at long last her due. When Eero Met His Match is at once a personal journey for its author as it is an impeccably researched reconstruction of two important figures in modern architecture, sure to appeal to architects, students, and architectural historians alike.

For more information on When Eero Met His Match, visit the Princeton University Press website.