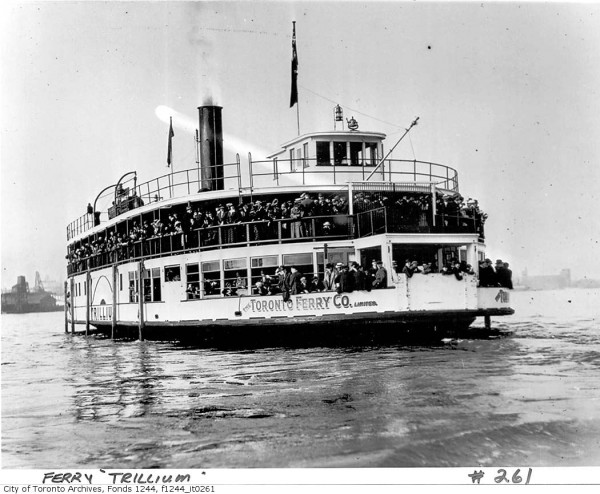 Almost one hundred years ago today, the City’s Trillium Ferry began carrying hoards of Island-bound Torontonians across Toronto Bay, much like it still does today.  Launched into the harbour in 1910, the Trillium was initially built for those hot summer days when the crowds would overwhelm the three other “flower ferries” – the Primrose, the Mayflower and the Bluebell.

Built by Polson Iron Works Limited, the $75,000 Trillium was an exact replica of her sister ship, the Bluebell, built four years earlier.  The largest of the four “flower ferries,” the Trillium was named the flower of Ontario and had an original passenger capacity of 1450.

Like today, the Trillium is still used to transport people to the Island on especially busy days where her large passenger capacity helps to ease wait times.  Yet unlike now, in 1910 these busy days coincided with Maple Leafs baseball games, which were played in their newly built ballpark on Hanlan’s Point.

First operated by Lawrence Solman, who also happened to be the owner of the Maple Leafs Baseball team, the Trillium was built to help meet the needs of a growing number of Toronto baseball fans.  Solman, as owner of both the Trillium and the Baseball team, made money from both the baseball tickets and the mandatory ferry trips to and from the Island ballpark, which he charged separately.  Solman’s moneymaking scheme soon grabbed the attention of City Hall, who decided to take control of the Toronto Ferries by forcing Solman to sell his ferry fleet to the City.

When Solman got wind of the City’s plan to confiscate his ferry fleet and put them under the management of the Toronto Transportation Commission, he decided to build a $750,000 stadium seating 20,000 people on the mainland.  So when the TTC finally took over operation of the fleet of Harbour ferries in 1927 (meaning a streetcar transfer could get you onto the ferry for no extra charge) Solman’s new Maple Leaf Stadium was already a year old, sitting at the corner of Bathurst Street and Fleet Street.

Because of the ballpark’s relocation, the demand for ferry service to the Island took a severe hit.  More problematic, however, was the terrible shape of the ships handed over to the city by Solman; the Trillium suffered from extensive dry-rot to its upper decks, which often held as many as a thousand passengers.

Despite her condition, the Trillium was repaired and put into active service for 25 years until she was replaced by several faster diesel-powered ships in 1952 and finally retired from use in 1957.  For 19 years the ship would lie abandoned in an Island lagoon, gradually falling into complete disrepair.

In 1974, interest began to build as to whether the Trillium would ever be used again, specifically as a floating restaurant or a museum.  Tommy Thompson, the Commissioner of Metro Toronto Parks that had taken over ownership of the ferries from the TTC in 1961, instead ordered a $1 million retrofit for the existing four ferries, including the Trillium.

By 1976, the Trillium had been completely restored to its 1910 appearance, including the original engine and side paddle-wheels.  A special dock was built on the eastern side of Queen’s Quay to accommodate her wide girth and her passenger capacity was reduced to 955 people.

Worthy of note is the Trillium‘s collision with the S.S. Normac in 1981.  Built in 1902, the Normac had the original floating restaurant that is now Captain John’s Harbour Boat Restaurant.  The Normac sunk (photo here) two weeks after hitting the Trillium, leading the restaurant to relocate to the M.S. Jadran, which houses many of the salvaged ruins of the Normac, including the old wooden wheel. The Trillium continues to operate in the Toronto harbour on particularly busy summer weekends, especially when there are festivals on the Island.  Unlike the other more modern ferries, however, the Trillium can take almost an hour to cross the harbour, giving the curious passenger plenty of time to check out the paddle-wheels in motion as well as the small displays usually set up on the lower deck.