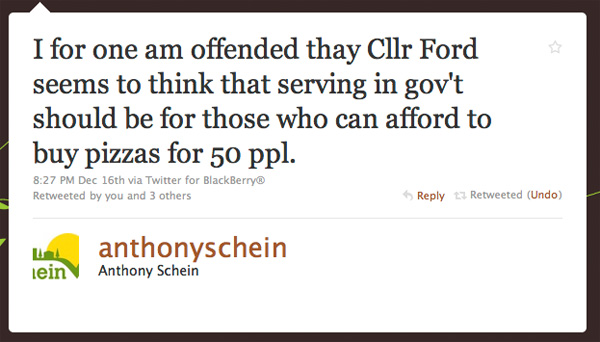 Two weeks ago, Rob Ford succeeded in his longtime quest to rid City Council meetings of modest, taxpayer-funded refreshments. The following week, however, he and his brother took councillors by surprise by personally purchasing food for everyone.

Anthony Schein, formerly an assistant to Councillor Joe Mihevc, sent this letter to the Toronto Star outlining the troubling implications of this shift. The paper didn’t print the letter, so we present it to you here.

Re: Free cookies, pizza for councillors — courtesy of Ford, Dec. 17

Mayor Rob Ford and brother and Councillor Doug showed their Respect for Taxpayers — and their largesse — at Thursday’s Council meeting, catering baked goods and pizza for all 45 councillors and senior City officials out of their own pockets.

While their volunteerism and hospitality are admirable traits, both are underwritten by the Ford brothers’ enormous personal wealth, and both are troubling signs of the administration’s ideological tilt.

Mayor and Councillor Ford see themselves as patrons, whether of council, of the arts, or the poor. Indeed, then–Councillor Rob Ford’s website routinely listed his thousands of dollars in personal donations to charitable (as well as political) causes.

Who needs sound public policy, when we can depend on the generosity and largesse of the elite? Who needs a social welfare system, when we have charitable giving from the wealthy? This attitude permeates virtually all elements of the Fords’ policy approach — whether then–mayoral candidate Ford’s offer to personally help buy street drugs for a sick constituent, his belief that an arts and culture plan can be replaced by selling tickets to galas, or the belief (articulated at a Latino-organized mayoral debate) that youth-oriented social programs could be replaced by football teams and cheerleading squads.

Clearly, under the Fords’ approach, the only ones of us fit to hold office are the independently wealthy: those rich enough to volunteer our time, buy pizza for everyone, and replace public policy with personal patronage. Hardly the Common Man image Ford proclaims for himself — or the democratic system of government Torontonians believe in.