Toronto is often called ‘a city within a park,’ a nickname which not only conjures a pretty picture but is a pretty good goal for any city. In some ways we do live up to the name – there are over 1,500 parks across Toronto that cover more than 20,000 acres and the number grows each year. This year alone nine new parks are expected to be added to the list and over the next few days I’ll be introducing some of these new and soon-to-be parks.

Further east along the waterfront, tucked under Eastern Avenue at the Richmond and Adelaide overpasses is the soon-to-be Underpass Park. Another of Waterfront Toronto’s cutting edge ideas, the park will transform an under-used and derelict space into a “bright, new, urban amenity.” Since downtown raised thoroughfares, such as the Gardiner and Eastern Ave., are such visually and physically imposing obstacles, the park creates an essential pedestrian connection between the north and south sides of the overpass.

Like Sherbourne Common the park has been designed by the Vancouver-based landscape architectural firm, Phillips Farevaag Smallenberg, with an innovative design that maximizes the existing conditions – especially the more than 50 overpass columns. Understandably, light will feature prominently in the new space making it safe and attractive at all times of the day. Recreational facilities, climbing structures, and “flexible community space” will take up much of the covered areas while the opened areas will be defined by greenery – groves of trees and grasses as well as community gardens.

The wall of graffiti along St. Lawrence Street where Underpass Park is now under construction. (Photo courtesy of Google Street View).

The park is part of larger plans to redevelop the West Don Lands, a part of the city which, as Toronto Star’s Christopher Hume described, has been a “hole in the urban fabric for as long as most of us can remember.” The area will become home to into a new mixed-use and mixed-income community. Underpass Park is being built in two phases, the portion east of St. Lawrence Street will be completed first due to it’s proximity to the River City development, the new TCHC complex on King St, and the Don River Park, whereas the western portion (directly under the Adelaide and Richmond ramps) will be constructed soon after.

Construction began in May and the first part of the park is expected to open sometime by the end of this year. Already the wall of graffiti along St. Lawrence Street has disappeared and in its place are backhoes and some freshly poured concrete. The concrete will soon be covered with ipe wood and will transform into one of the park’s defining design features – a series of long, narrow ribbon-like strips – the dividers, walkways, and benches of the park. 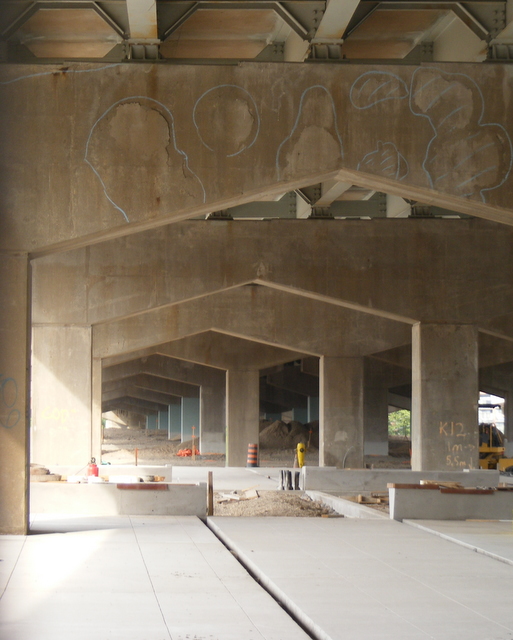 Looking east under the Richmond ramp and the many columns that will be part of the park.