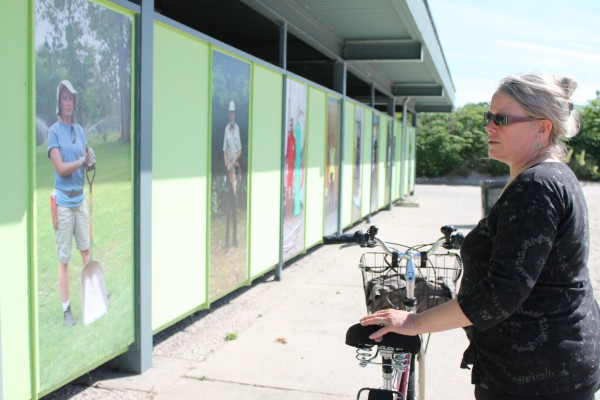 A bright lime green building stands at the edge of the beach on Toronto’s Centre Island. Life-size photographs of City workers line its outer walls, drawing attention to it from passerby and islanders out for a stroll. April Hickox couldn’t have hoped for more.

April has lived on the island since she was three years old. She grew up wandering through its fields and playing on its beaches. As an artist and photographer (as well as an associate professor of photography at OCADU), she draws heavily from those surroundings and uses them in landscape photographs and studies on the makeup of the land. But one thing April says she didn’t notice until three years ago was the invisible hands performing unseen tasks, beautifying the island in ways she didn’t even think about. That is, until they went on strike.

The strike of 2009 saw 24,000 City workers walk off their jobs, protesting job security, seniority, and sick days. It affected all areas of the city, but especially affected the islanders. Ferry service to and from the island stopped, and workers stopped coming to take care of the land.

April says it was both thrilling and shocking for her to experience the island in its most natural state — without anyone coming in to cut the lawn, or anyone staffing the farm.

“The park really changed. It was sort of exciting for me as a landscape photographer — there was hardly anyone here because the boats weren’t running and the landscape was changing drastically; the grass was getting really long and things were really changing.”

But there were rumours that even during this time, some of the workers were finding ways to the island.

“People were talking about how the gardeners were sneaking over to pull weeds because they thought by the time they got back the gardens would be destroyed,” April says.

April says it made her realize that these people genuinely liked and cared about their jobs, and she began wondering just how many people knew them.

So began her project. She teamed up with Rafael Ochoa who graduated from OCADU and has been her assistant for a few years now. The two began taking photographs of different workers (when they were back from their strike) in the places the workers spent their time. After the photographs had been taken, they were blown up to life size, printed on MACtac and adhered to buildings around the island.

“I wanted them to have a presence in the landscape and to be life size so that people were slightly confused by them,” April says.

Linda Darking works at Far Enough Farm and had her photo taken by April (see below). Put up on a barn inside the donkey’s enclosure, she said people often think that’s actually her. She says she was intrigued by the project and that she has noticed a difference since it’s been done.

“I think it’s become a little more personal as opposed to an operation,” Linda says. 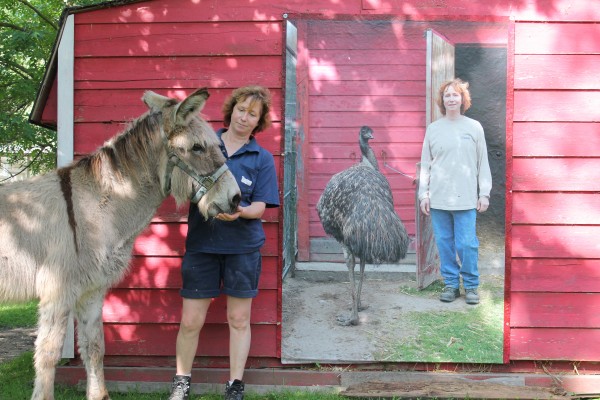 April says one of the best results of this three-year-long project is that people are noticing. It’s made the island into more of a community that includes these public workers.

“The Islanders now recognize faces of people and they don’t know their names of course but they’re much more willing to go, ‘Wow that was a great picture of you.’ It has opened up a dialogue… The workers feel good about Raf and I recognizing the work they do and drawing positive attention to it,” April says.

The exhibit will be up on the island until Sept. 15. Additional work from April can be found at the Katzman Kamen Gallery.