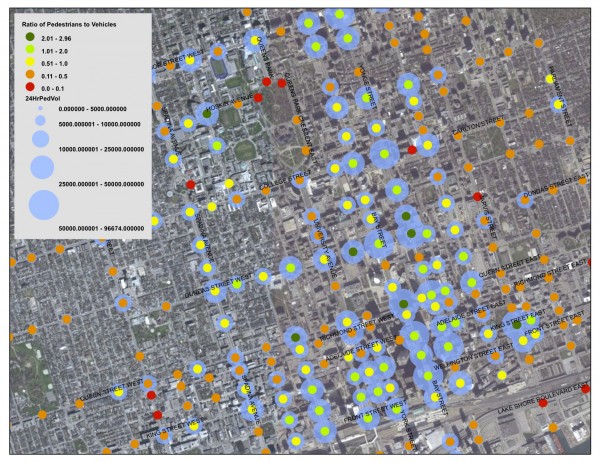 Humanizing and humanely utilizing the endless stream of data coming out of cities may be a 21st century urban planner’s greatest challenge. Eyes on the screen has become almost as fundamental as eyes on the street to understanding how cities function.

Helle Soholt, a partner at Gehl Architects, re-emphasized this message a couple weeks ago in a talk at the Design Exchange on urban design and transportation planning. It’s a message Gehl has been pioneering for decades but is only beginning to catch on more broadly.

The City of Toronto is ahead of the curve compared to most governments with its fantastic Open Data portal. Recently, a dataset was uploaded that caught my eye for being particularly Gehlian in its focus on people. It compares pedestrian and vehicle volumes at intersections throughout the city. I’ve taken a first pass at this dataset by mapping this information as the amount of pedestrians at intersections during certain 24 hour periods (in blue) and the ratio of pedestrians to vehicles (colour-coded) during that period (each intersection was measured on a different day at some point between 2007 and 2011). 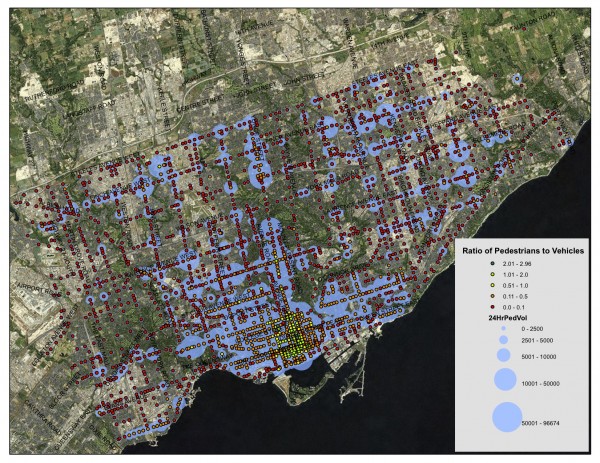 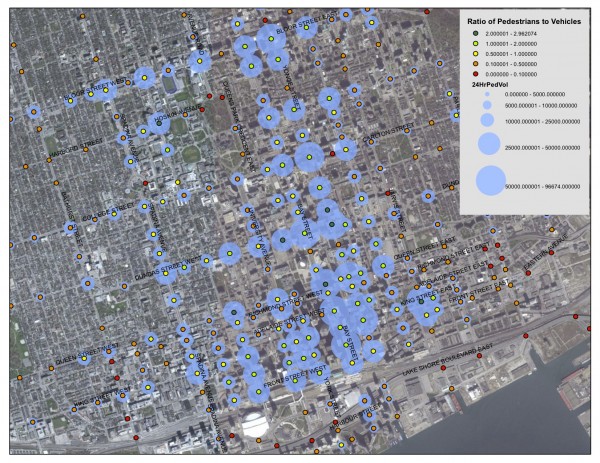 Before drawing any findings from these maps, there are a few problems with the data. First, each intersection’s volume counts were gathered on a different day. This means that some were counted during the summer, some the winter, some possibly with major construction nearby and some potentially after the opening of several new condo or office towers. The weather wasn’t recorded and it’s impossible to say what kind of human error may have been a factor in arriving at the final 24 hour figures. Because of these issues, comparing one point to another is problematic.

Regardless, a few things stood out for me:

a) All intersections that had a higher volume of pedestrians than vehicles counted are in the downtown core except for on Yonge Street at Eglinton and at St. Clair.
The intersections with the highest pedestrian volumes counted during a 24 hour period were

b) Of the 15 intersections counted on Yonge Street between Bloor and King, 12 had higher pedestrian volumes than vehicle volumes during a 24 hour period, with as much as 3 times the volume of people than vehicles at Gould Street and Dundas. 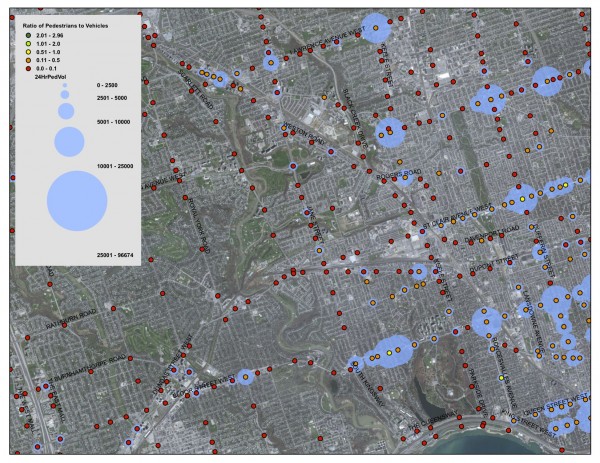 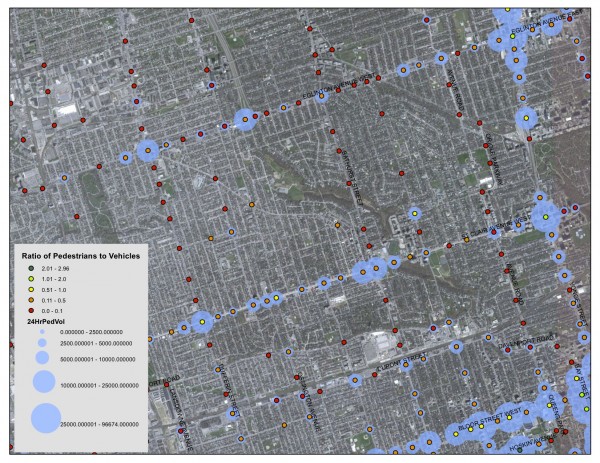 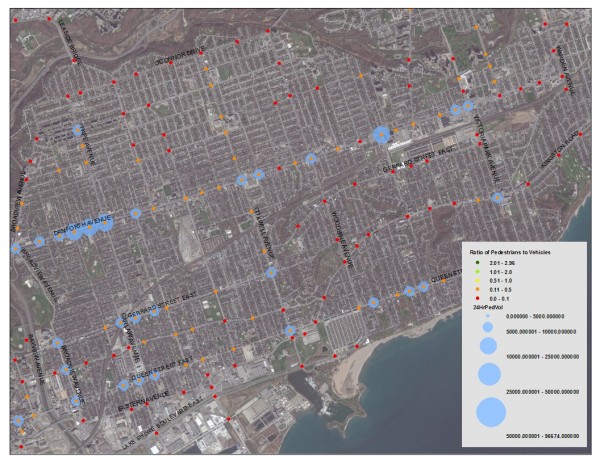 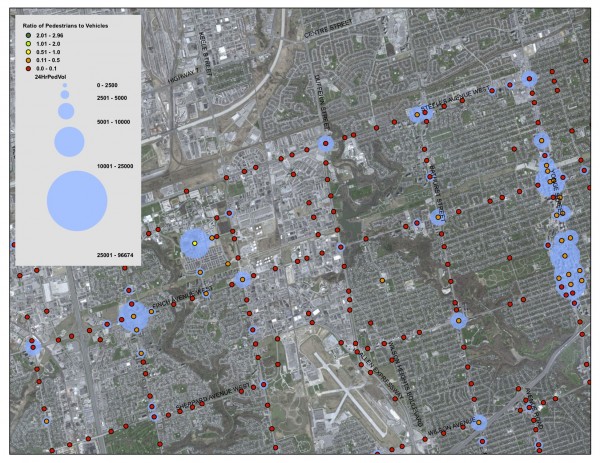 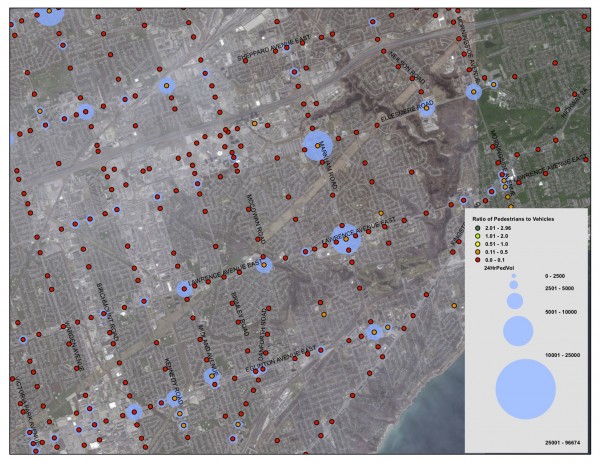 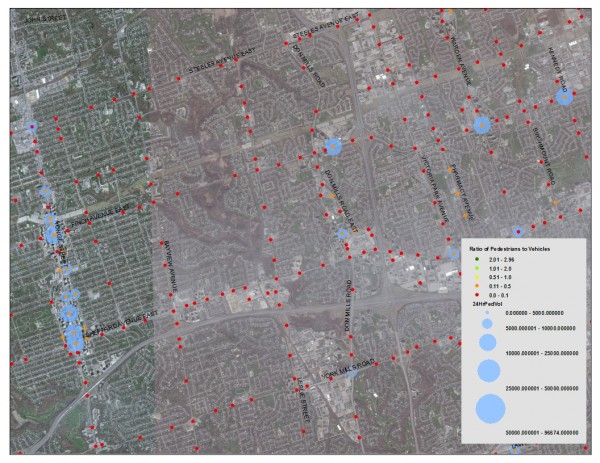 Outside the downtown core, the city is mostly filled with intersections that, despite large numbers of people in some places, are dominated by vehicles (the exception is on the York University campus).

These numbers call to mind the familiar idea of pedestrianizing downtown streets like Yonge as well as a new idea of applying a concept like the TTC’s ‘crowding standards’ — where the level of service (number and frequency of buses, trains or streetcars) must be set by an objective formula based on ridership (a.k.a crowding) levels — to street design standards, particularly in the suburbs.  With complete streets on all major arterials remaining an ultimate goal, formulas could be set mandating certain ‘design minimums’ required for safety purposes at intersections with a certain volume of people, irrespective of their ratio to vehicles.