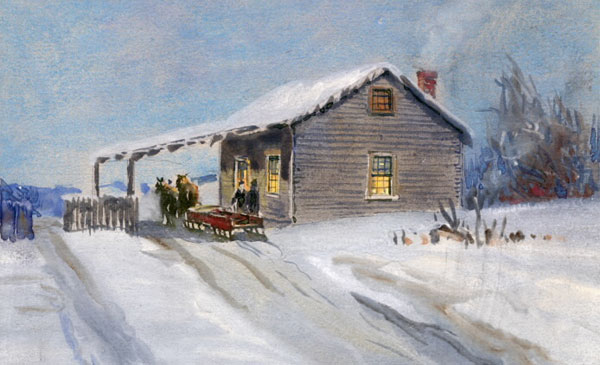 Toronto was just a tiny little frontier town when its first road tolls were introduced. That was back in 1820; York wasn’t even 30 years old yet. There were still only about a thousand people living in a few blocks nestled between the lake and the ancient forest that had stood on this land for thousands of years. Even the major roads were only rough, muddy paths back then. Building them and keeping them passable was a big, expensive job. And so, road tolls were introduced as a way to help pay for them.

The first tollhouse was built at the corner of Yonge and King. The intersection, now at the bottom of a canyon of skyscrapers, wasn’t much more than a crossroads in the countryside, a few blocks west of the heart of the town. Soon, tollhouses could be found all over Toronto. The one in the painting above was at Dundas and Bloor.

The tolls made plenty of Torontonians angry. Many people tried to avoid paying them altogether. It was a common practice back then — and not just in Toronto. Cornelius Krieghoff, one of the most famous early Canadian artists, has a whole series of paintings that feature people whipping their horses up to full speed, blowing past tollhouses without paying. On the other side of the Atlantic, in Wales, people rioted; men dressed up as women to destroy tollgates under the cover of darkness. They called themselves Rebeccaites after Genesis 24:60: “And they blessed Rebekah and said unto her… let thy seed posses the gate of those which hate them.”

In Toronto, things could get violent too. On Queen Street, there was a particularly controversial tollhouse at the intersection of what’s now Ossington. It was the end of Dundas back then, the major road stretching west all the way to London. To the south of the tollgate was Fort York, so if you wanted to sell something to the British army, you had to stop and pay a toll every time you made a delivery.

One lumber dealer got fed up. His men frequently got into fights with the toll collectors – sometimes the disagreements descended into violence. Eventually, the lumber dealer came up with a plan. He bought the plot of land directly to the east of the tollhouse and built his own path through the woods. That way, his men could bypass the tollgate altogether. He called his new road Rebecca Street, in honour of those Welsh rebels. And it’s still there today, branching off Ossington a block north of Queen.

Still, there would be tollhouses in Toronto for nearly a hundred years. They helped to fuel our growth from that tiny town of a thousand into a thriving metropolis of a quarter of a million. It wasn’t until the end of the 1800s that the last of the tollhouses was closed. It was shuttered as part of an agreement allowing people from outside the city to sell their goods at the St. Lawrence Market without having to pay any fees. Most of the tollhouses were demolished. Today, one of them still survives: the “tollkeeper’s cottage” on the north-west corner of Davenport and Bathurst. A few years ago, it was restored and opened to the public as a museum.

More than fifty years after the last tollhouse closed, the idea of road tolls was revisited. In the 1950s, some politicians — including the mayor — suggested the Gardiner Expressway should be built as a toll highway. Many others opposed the plan and it never did happen. It wasn’t until the 1990s that Bob Rae’s provincial government built the 407 just beyond the edge of the city as a way to raise public funds. (The Mike Harris Conservatives then leased it off to a private consortium.) The 407 became the first toll road in the world without gates, operating electronically instead.

Now, nearly two hundred years after they first sparked controversy in Toronto, road tolls are back in the news as a potential source for transit funding. And with City Council refusing to endorse any revenue tools during last week’s dysfunctional mess, it looks like the final decision will once again be in hands of the provincial government.

Image: Tollgate at Dundas and Bloor by Owen Staples (via the Toronto Public Library website)