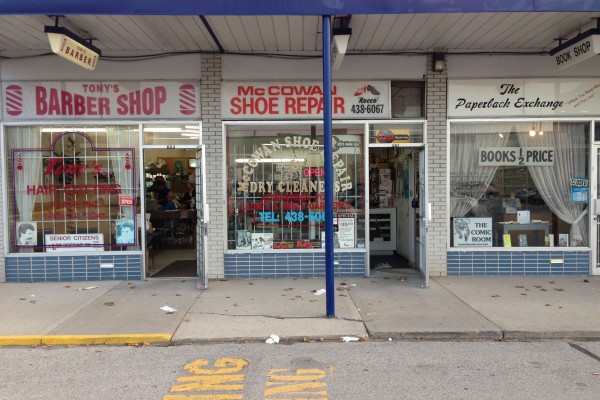 Tonight is the Ford Brother’s Scarborough “Ford Fest” at Thomson Park in the Bendale neighbourhood. If the party is anything like the Ford Fest I attended in 2010 in Etobicoke (read about that one here) a fun time will be had by all. I’m fond of Bendale, as back in 2004 I wrote an Eye Weekly cover story on the neighbourhood after spending much of the year working on an oral and archival history project called “Bendale: About Place,” with the Scarborough Historical Museum (you can see that exhibit here, on a vintage 2004 website).

My Eye Weekly piece is reprinted below. There are some changes (the mosque located in an old car dealership now has their own building) and some things still the same (the photo above, of stores that still exist, was taken last September, with seniors haircuts still at $1 despite 9 years of inflation). Bendale was the first place in Toronto I came to appreciate the role our postwar stripmalls play for many people. A much expanded and updated version of this essay eventually made its way into my book, Stroll.

If you want to see how Toronto works, how its history and its present reality co-exist, take a walk through the Bendale neighbourhood in Scarborough. Here the layers of our city are as visible as they are in Kensington Market or Corktown.

Bendale spreads out directly south of Scarborough Town Centre, and runs almost to Eglinton. The name “Bendale” doesn’t resonate with everyone — it’s scattered around the area, attached to schools or retirement homes, and the post office that bore its name is long gone. It’s anachronistic and, like the neighbourhood itself, mostly overlooked.

The most striking feature in Bendale is the sense of space. There is no skyline. The bank headquarters are far to the west, visible only on days with minimal smog. Instead of the CN Tower as a geographic landmark, Bendale has high-voltage power lines. They cut a diagonal swath through the neighbourhood. They never linger or come down to a human level; instead they are cold and reserved, headed straight for those towers downtown. Standing in the middle of the hydro fields is like being in Montana. Big sky country. You can even see the horizon.

Long before the power lines were put in, Bendale was one of the cradles of Scarborough civilization. Most activity took place along St. Andrew’s Road, a bucolic lane that curves around small patches of forested ravine running between McCowan and Brimley. Take a stroll here and the city might as well be a thousand kilometres away. On misty November mornings, the road feels and smells like rural Nova Scotia. In the middle of this sits St. Andrew’s Church, built in 1848. It still welcomes a Presbyterian congregation, some of whom are descendants of the Thomson family, the first European settlers in the area. You know they’re important because the high school on Lawrence was named after them (David and Mary Thomson Collegiate Institute).

The Thomson clan’s homes are still there on St. Andrew’s Road, dating back to the mid 1800s. Some have historic plaques out front put up by the Scarborough Historical Society. The owners had great vernacular names like “Stonehouse Willie” and “Springfield Jimmy,” names that referenced the geography and building materials of their houses.

Bendale was largely rural until the late 1950s, when farmers began selling off their land to developers, who put in the cul de sacs, bungalows and strip malls. Farms known by the owners’ names were subdivided and conquered. The Walton Farm was at Brimley and Ellesmere. Bill Walton was born there, and he sold it some 40 years ago. Well into his 80s now, he can see the location of his farm from the 5th floor of his retirement home up at Sheppard and Kennedy because it’s marked by a new 30-storey condo tower.

The second wave of Bendale pioneers who filled up those modern homes were looking for the Canadian dream, the one we borrowed from America. They came from downtown or from the streetcar suburbs around the Danforth or St. Clair and started families. Their backgrounds were mostly English and Scottish, but some Greek and Italian folks were attracted to the area too.

One development to the east of McCowan is known as the “Ben Jungle” because every street begins with the prefix Ben; there’s Benlight, Benlark, Benfrisco, Ben Nevis, Ben Stanton, Benroyal and even streets called Benhur and Benorama. (It was on Benleigh, a quiet street lined with Pontiac Sunfires and Dodge Caravans, that 17-year-old Jeffrey Reodica was shot dead by police last May during a gang confrontation.)

As these European families grew up and out, in came the Filipinos, Chinese, Sri Lankans, Indians, Afghanis, Persians, West Indians and Somalis, and Bendale got even more interesting.

The built environment suggests a Leave It to Beaver modernism designed with the car in mind. The plazas were just rest stops on the way to real centres like Cedarbrae Mall or, after it opened in 1973, the Scarborough Town Centre (home of the very first Second Cup — for more of Scarborough’s benificence, see sidebar page 12). Yet so many of these new residents do not own cars (an unfortunate and inconvenient miscalculation on their part surely). They can’t make it to these malls without a long journey. There are often long lines at windswept bus stops. The plazas we love to vilify actually become centres for many people who lead what amount to urban, or possibly even village lives in a suburban landscape.

Today, these ’50s- and ’60s-era plazas better emulate the idea of Main Street than do downtown neighbourhoods like the Annex or Little Italy. There are no Starbucks, one-of-a-kind underwear stores or $100 haircuts. If you look past the parking lots, these places are un-gentrified, old-fashioned urban streets, places that people without cars, or a lot of extra money, can get to.

On McCowan, just south of Lawrence, there is a plaza with a neat old mod name: “The Hub.” A Royal Bank and Shoppers Drug Mart serve as anchors close to the main intersection, but the rest of the development is all do-it-yourself stores. There are real barbershops (Tony’s — $1 Senior Citizen discounts on Tuesdays, Wednesdays, Thursdays) with faded glamour shots in the windows of guys with high-and-tight blown dry hair. There’s also The Paperback Exchange, McCowan Shoe Repair, the Asia Bakery and the New Suburban Restaurant, where you can get grilled cheese sandwiches, long, narrow, goldenish looking French fries and good, wholesome filtered coffee.

Over at the Hillside Plaza on Lawrence near Brimley, the corner Tim Hortons gives way to the Rasa Mini Mart, where the Sri Lankan owner heads out to the airport every day at 4am to pick out fresh flowers for his customers to take to Scarborough General Hospital nearby. A couple of doors down is the First Class Bakery, also owned by Sri Lankans. It used to be run by Lithuanians. They make good croissants and really spicy vegetarian samosas. Up above the bakery, on the second floor, is the Thunder School of Chess. Then there is Kathy S.P. Importers Fresh Fish Market, Emmy’s In-Style Fashions (“Ladies, Mens, Diapers” reads the sign out front), the A1 Top Quality Florist, the huge Bombay Bazaar grocery store, Johnny Active Wear, the Liberty Restaurant & Bar, and the Watch, Clock and Jewelry Repair shop. Everything a real neighbourhood needs to sustain itself, including Comet Lanes, an eight-lane, five-pin bowling alley out back.

These small businesses can survive and prosper in the shadow of the chains and malls because the rents out here are considerably cheaper than downtown. Here, monthly rent of $12 or $13 per square foot is the average, compared to $23-$25 in places like the Annex or along Church and Yonge Streets around Wellesley (in other areas it can get as high as $40). It opens up room for innovation, low-budget eccentricity and services that cater to actual people rather than broadly defined demographics.

If you stand still, even for a short period, you notice everybody seems to know each other. People say hi or nod to each other, the way we do when we run into someone we don’t know that well but see every day. The stores are busy. Thomson Park is packed with multicoloured kids on summer days. The Mosque, housed in a former car dealership, holds barbecues in the summer. It feels like a small town that’s been invaded by Torontonians. If you’re on foot, you forget about the six lanes of constant traffic. There are too many ravines, strange store combinations and people to look at.