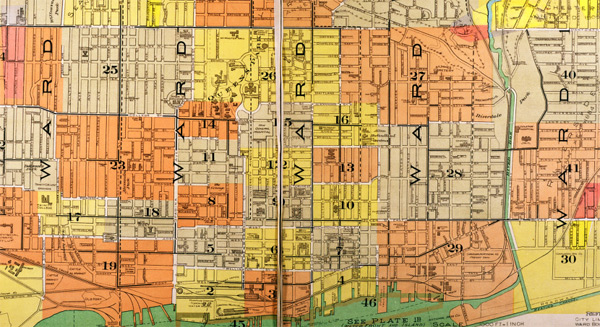 We usually think of Toronto — at least the older part of it — as being based on a grid of streets. One of the city’s free weekly newspapers even calls itself The Grid.

But Toronto’s streets are not in fact laid out in a true grid, and that has some significant implications for how we manage cycling routes and traffic.

Cities like Vancouver and New York have close to true grid layouts — that is, all of the streets, even the lesser ones, are continuous and parallel to each other.

What Toronto has, instead, is a series of mini-grids stitched together within a skeleton grid of arterial streets (the old concession roads). These mini-grids within concession blocks often don’t align with each other.

All over the older part of Toronto, if you are travelling on a side street, when you get to an arterial you’ll often find that the continuation of your street on the other side is off-set a little, or a lot, from the one you’re on.

As historian Richard White wrote in the Summer 2010 issue of Spacing, these off-set streets are the result of early landowners developing their land grants each in their own way. Once the car started to become dominant, the City embarked on a “jog elimination” program to stitch some of these streets together more continuously — a process that gave us, for example, the length of Dundas St., extended eastwards by stitching together many older east-west streets. But only a relatively small number of jog eliminations were ever completed (examples cyclists may be familiar with are the connections between Beverly and St. George, or Hoskin and Harbord).

When you add to these off-set streets railway lines, ravines, parks and other interventions, the result is that few side-streets in even the older parts of Toronto extend for more than a few kilometers. (And once you get to the post-war suburbs, all street continuity is deliberately lost for side-streets).

This irregularity has implications for Toronto’s cycling network. Politicians and others occasionally claim that Toronto’s cycling network should avoid arterials and be based on side streets — a solution common, for example, in Vancouver. But, unlike Vancouver, Toronto does not have side streets that continuously parallel its main streets. Where there are reasonably extended side-streets, they are indeed used by cyclists (for example, Shaw or Logan). But for the most part, to travel any great distance in a reasonably straight line, the only solution for cyclists in Toronto, as for cars and surface transit, is to travel along main streets. That’s why we need to focus on a complete streets policy to enable all modes to use these main streets together.

Incidentally, the lack of a true grid also explains why it’s more difficult to create a network of one-way main streets in Toronto similar to that in Manhattan. There simply are not a lot of situations where there are parallel, adjacent main streets of similar size for any great distance — the only examples are restricted to the city’s core.

Image from City of Toronto Archives