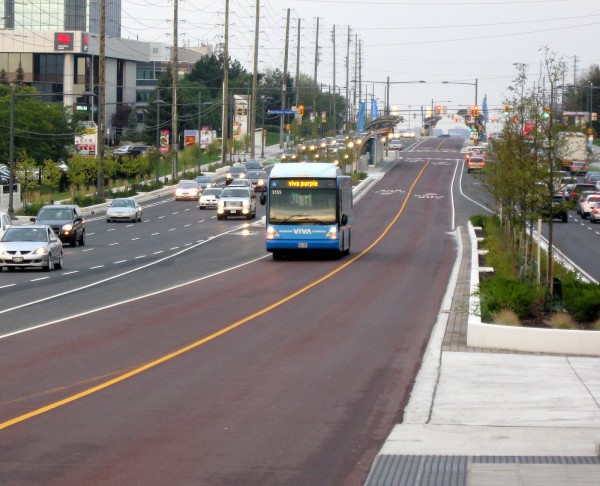 I recently visited the first completed section of “Rapidway”, York Region Transit’s moniker for its new median bus rapid transit (BRT) lanes. YRT’s planned network of Rapidways is intended to transform YRT’s backbone, Viva, into a true bus rapid transit system. Viva was introduced in 2005 as a separate brand, but integrated with, YRT,  as a “BRT-lite” service, with conventional buses making limited stops in mixed traffic, with off-board fare payment and all-door boarding.

This first section opened in August, on Highway 7 between Bayview Avenue and East Beaver Creek Road on the Markham/Richmond Hill border. An eastern extension of the new busway on Highway 7 to Town Centre Boulevard (near Warden Avenue) is nearing completion. The primary service on this first phase is Viva Purple, which operates from York University to Markham-Stouffville Hospital. A  rush-hour supplemental route, Viva Pink, operates between Finch Station and Unionville GO Station.

The Highway 7 Rapidway is part of a much larger “VivaNext” plan for building new rapid transit corridors and upgrading others across York Region. Rapidways are also under construction on Highway 7 in Vaughan near the terminus of the Spadina Subway extension, and on Davis Drive in Newmarket, which will see new Viva service in 2014.  Further phases include Highway 7 and Centre Street in Vaughan and Yonge Street north from Highway 7 in Richmond Hill.

Interestingly, there were also plans for similar bus-only median lanes on Yonge Street south of Highway 7 all the way to Finch Station; this is the busiest of York Region’s transit corridors. However, York Region is lobbying for the extension of the Yonge Subway to Richmond Hill and has replaced the busway in its plans with the proposed subway extension. There are six new “Vivastations” (as Viva’s bus stops are branded) in service in this first section. At Bayview Avenue, buses load and unload at the curb. Going eastbound, buses cross three lanes of general traffic and enter red-paved bus-only lanes in the middle of Highway 7. Attractive glass canopies shelter waiting passengers at each station; shelters are heated in the winter. Fare payment is made at the station (Viva uses the proof-of-payment system, similar to GO trains), so boarding is fast and simple.

Traffic signals have the same basic operation as on St. Clair Avenue. Rapidway stations are usually on the far side of each intersection, providing room on the near side for left turn lanes. Each intersection has separate left-turn phases from Highway 7, buses proceed with the general through traffic phase. Pedestrians going to and from the Vivastations must cross with the lights at the designated crosswalks.

There is much to like about the new Rapidways, but there are several downsides, particularly for pedestrians. And the ugly truth is that while York Region builds impressive transit infrastructure, transit service remains neglected. Highway 7 is urbanizing though Markham and Richmond Hill

There are many good things about the new Rapidways. The stations are attractive and well-designed. During construction on Highway 7, York Region improved the streetscaping, including improved sidewalks as well as flowerbeds and many newly-planted trees. Hopefully these improvements are maintained over the long term.

Highway 7 through parts of Richmond Hill and Markham have urbanized over the last decade; mid-rise and high-rise condominium towers, many of which have successful streetfront retail. There appears to be a deliberate effort to direct high-density development to these transit corridors. Many of the renderings on the VivaNext website illustrate those plans.

Where the Rapidway has opened, York Region also built new bicycle lanes and lowered speed limits from 70 and 80 kilometres an hour down to 60 km/h. The bike lanes are not separated from the busy car and truck traffic on the corridor, but a narrow painted buffer was added, giving cyclists a bit more room. Near intersections, the bike lanes are painted green, while green-painted boxes guide cyclists to make indirect two-stage left turns. These boxes, shown below, allow cyclists to avoid crossing three lanes of busy traffic to reach the left turn lanes. While Highway 7 itself is now a bit more pedestrian-friendly, it’s a different story when having to cross it. York Region widened Highway 7 to accommodate the two bus-only centre lanes while maintaining six through traffic lanes (three in each direction). Therefore, in order to cross Highway 7, pedestrians must traverse seven traffic lanes (includes the left-turn lane), two bus lanes and two bike lanes. Unlike Spadina or St. Clair Avenues, which also have transit medians, pedestrians must cross Highway 7 in two separate phases; the countdown timers are too short to cross all at once. Pedestrians must wait between lights in the median at the entrance to the station. Walk signals are not automatic for crossing Highway 7; the button must be pressed a second time to get all the way across.

Local services, such as the parallel #1 Highway 7 bus, do not serve the bus median but load from conventional stops on the curb, on the near-side of each intersection, making it difficult to transfer from the express Viva service to the local YRT service. Short trips that could utilize either the local or Viva bus requires the passenger to choose which bus to catch, rather than wait in one general area and board the first bus that appears. Two-phase pedestrian crossing across seven traffic lanes, two bus lanes and two bike lanes. Note the local bus stop and shelter on the far side of the intersection.

While York Region has been busy building the fancy new BRT infrastructure, the rest of the bus network that feeds into the Viva spine is largely neglected. YRT has cut service levels on many of its routes each year since 2010; the 2014 service plan (PDF) proposes more service reductions. A lengthy strike by  YRT’s private contractors over three months in 2011-2012 affected most of the system. Meanwhile YRT’s fares are the highest in the Greater Toronto Area; in fact there’s a proposal to hike one-zone cash fares from $3.75 to $4.00 in early 2014 and make similar increases to the cost of other fare media. (In comparison, TTC cash fares are currently $3.00, tokens are $2.60 each.)

Even on the fancy new Rapidway, service levels almost make a mockery of the fine new infrastructure. On this portion of Highway 7, buses are scheduled every 16 minutes off-peak, this improves to a bus every 8 minutes during the peak hours. The TTC has several dozen routes – operating in mixed traffic – that see better service. Incredibly, the 2014 service plan proposes cutting some late evening trips cut from Viva Purple, the only off-peak service on the new busway.

With further intensification and attractiveness of a faster, more comfortable commute by bus, I’m hopeful that York Region’s trend of cost-cutting will reverse itself and that these attractive new Rapidways will prove their worth. In the short term, however, it is hard not to feel a bit skeptical.