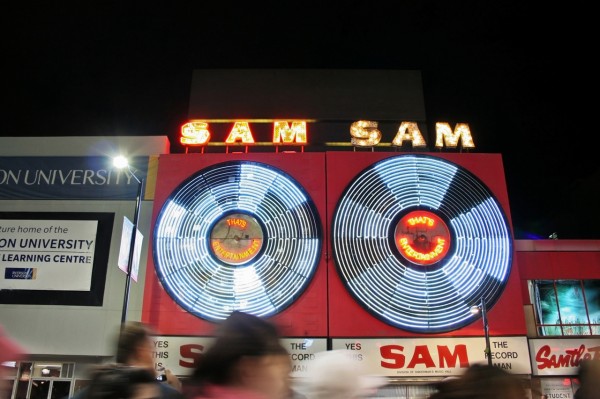 Not long after I moved into the St. Clair West area, in the mid-1990s, I heard about a City-run consultation on the future of the long shuttered TTC car barns property between Wychwood Avenue and Christie.

The meetings took place in a stuffy former classroom in the Hillcrest Community Centre, facilitated by a droning planner. He turned up to each session armed with various plans that included features ranging from a senior’s home (fronting Christie) to a suburban-style subdivision, complete with cul-de-sac. Some participants (myself included) decided to play urban planner and submitted home-made schematics. It all seemed rather open-ended and opaque.

Throughout, the underlying assumption was that those dusty old buildings, hidden largely from view by perimeter hoardings, would be razed to make way for something new, although what that something would be remained unspecified.

At one point, a couple of people from a tiny group called Stop 103 began to attend, and they tentatively raised the notion of repurposing those buildings for arts, environmental and social organizations. The idea struck me as a long-shot — that is, until 1998, when the local councillor, Joe Mihevc, persuaded the TTC to allow visitors to peer into the barns and witness their tattered majesty up close.

That moment, to my mind, was the point of inflection in the complicated story of the Wychwood Barns’ renaissance as a local food/farmer’s market/artist loft/event space hub that is now seen as a shining example of purposeful heritage preservation. (The Barns last week began a year-long celebration of its centenary.)

Considering how well the project turned out, the fight to save the Barns was quite possibly the ugliest episode I’ve ever witnessed in my career following local politics. The showdown featured all manner of subterfuge, nastiness and pretext, and I still think it’s remarkable that the story ended as well as it did.

One of the contentious issues involved the historical significance of the Barns themselves. During the consultations, a prominent local heritage expert with impeccable credentials was pressed into service to argue against their architectural importance. Nothing special there worth saving, he solemnly assured the planners and councillors tasked with reviewing the project.

To some extent, he was correct: the Barns are long brick boxes with some interesting trestles and skylights, but little else that might satisfy those with a taste in early 20th century industrial design.

Okay, but what about their historical role, which is a slightly different question? The answer now becomes more complicated. The purchase of the land (recommended to the Board of Control by a young bureaucrat named R.C. Harris) and the subsequent construction of the five barns between 1913 and 1921 signified a milestone in Toronto’s growth. They are the physical embodiment of a distinct mode of urban development — the so-called streetcar suburb — and therefore hold symbolic importance. Those brick boxes serve to remind us of where we came from.

Yet it seems to me that the success of the Barns was also very much a function of a how a community was able to project its collective imagination onto a set of old buildings. I don’t mean to argue that heritage is in the eye of the beholder. But the truth is that from the chaos of that consultation emerged a set of ideas and visions that managed to bind together the past, the present and the future in an elegant package.

It’s worth acknowledging the sheer precariousness of this “formula.” The Barns’ salvation depended heavily on a handful of highly engaged individuals — e.g., the late Peter MacKendrick, who built the first outdoor rink on the site, or The Stop’s tireless fundraiser, Nick Saul, who diligently brought a parade of wealthy benefactors to the site, scoped out his vision of a Green Barn, and then charmed them into signing over a cheque. Yes, Margaret Mead’s famous quote continues to apply, but must the sustainability of the city’s history depend on that kind of luck?

We’re not very good at this sort of thing, which is another reason why the Barns commands so much attention. Toronto’s heritage preservation often extends no further than desultory facadism. Think of the old Yonge Street store-fronts that adorn the eastern edge of BCE Place, or that wafer-thin slice of architect John Lyle’s studio, which now overlooks the courtyard of One Bedford — a truly meaningless sop that celebrates little more than the tenacity of the Annex Residents Association.

This sort of preservation is content-free because the old bricks and beams are not merely shorn of context; they serve no present-day purpose.

Which leads me to the Sam-the-Record Man sign controversy. How do we prevent facadism when the thing to be preserved is precisely that — façade? It’s a difficult question that will resonate much more loudly when the lightbulb-festooned Honest Ed’s site comes up for redevelopment in the not-to-distant future.

At the risk of annoying my boss (I’m currently teaching in Ryerson’s j-school), many critics are correct in noting that the university’s president Sheldon Levy appears to be trying to wiggle out of a commitment that was very much part of the student centre approval process.

That said, the notion that the sign should hang on the Yonge Street frontage of the student centre is absurd — Snohetta’s disco-ball of a building was never designed to be adorned with those crackling neon headlights.

If one follows the logic that led to the preservation of the Barns, there’s certainly a case to be made that the sign has historical and cultural significance to the city, broadly defined. But if that’s the case, the City should play a more active part in finding ways to protect the sign, perhaps by providing (public) walls and resources to rebuild and maintain the structure.

The one other missing ingredient, however, is the most complicated one to engineer. The Barns survived the wrecking ball because of a public process that produced the visions, energy and resources required to re-purpose the structure.

That piece, to my mind, has been largely absent from the debate over Sam’s sign, and yet it is probably the most important element of all. Can Ryerson, as owner, and local councilor Kristyn Wong-Tam create a public forum in which interested parties may come together to re-imagine the sign, and how it might be adapted to fit into the present and future of Toronto’s cultural life?

From where I sit, it’s perhaps the only way to ensure that this curious commercial artifact from our past will live to illuminate another day.