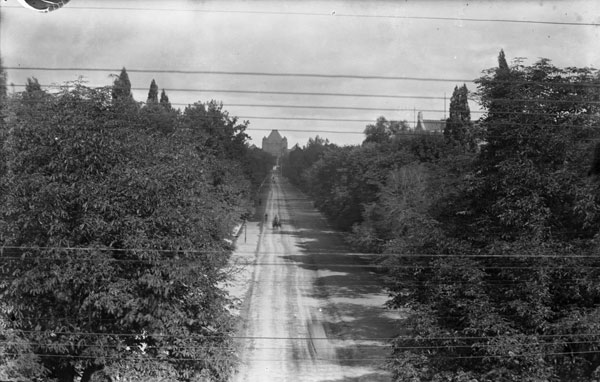 It’s hard to believe, but that is a photo of University Avenue in downtown Toronto. Today, this stretch of road is “Hospital Row,” lined with concrete and glass. But this is what it looked like in 1896. That’s Queen’s Park off in the distance. The Legislative Building had only recently been opened, but the land — previously part of the University of Toronto — had been leased by the Province all the way back in the 1850s.

The government turned the land into a public park. It was opened by the Prince of Wales, the guy would who later become King Edward VII (the same King Eddie Toronto’s famous hotel is named after, and who now sits astride his horse as a statue in the park). About 30 years before that, 500 horse chestnut trees were planted along University Avenue and a grassy promenade was built down what’s now the centre of the street. It became one of Toronto’s grandest avenues. Even Charles Dickens was impressed when he came to town.

So by the time this photo was taken, the chestnut trees of University Avenue had already been there for something like 70 years. But soon, the street would change. Toronto General Hospital moved to this strip in 1913. And over the next six decades, it was joined by many more, including Princess Margaret, Mount Sinai and Sick Kids. The trees have been replaced with concrete, pavement and glass. Only a thin sliver of green survives along the island that still cuts the avenue in two.

A version of this post originally appeared on the The Toronto Dreams Project Historical Ephemera Blog. You can find more sources, links and other related stories there.