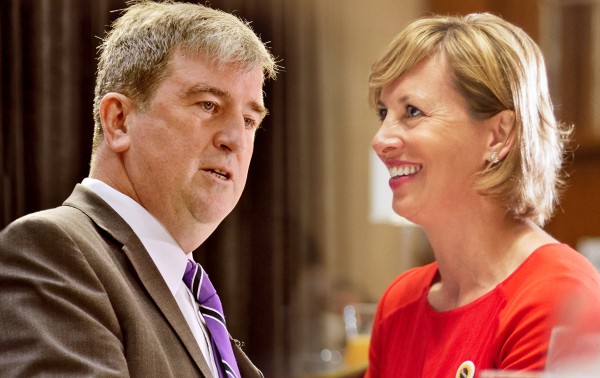 On the surface, last summer’s council show-down over the Scarborough subway proposal was the culmination of a sustained political advocacy campaign by TTC chair Karen Stintz and councilor Glenn de Baeremaeker.

The two councillors wanted a subway, rather than an LRT, built to replace the rapidly deteriorating Scarborough RT line. Stintz saw the gambit as a way of positioning herself for a mayoral run. De Baeremaeker, an outspoken LRT advocate, viewed the scheme as a defensive move in the face of aggressive robo-calls to his constituents from the brothers Ford.

But Kathleen Wynne’s Liberal government, and transportation minister Glen Murray in particular, were hardly passive spectators in the fraught process of re-litigating an $8.4 billion contract, signed in November, 2012, by Metrolinx, the City of Toronto, and the TTC. Following his February, 2013, appointment as transportation minister in Wynne’s new cabinet, Murray quietly orchestrated a stunning and costly policy reversal, with the full support of the premier.

Between February and August 2013, in fact, Wynne’s Liberal government meticulously worked to effectively gut that contract with an eye to gaining political advantage in a summer by-election campaign in a Scarborough riding. Ironically, she authorized this shift while condemning her predecessor, Dalton McGuinty, for cancelling a pair of gas plants, at great public cost, to protect four Liberal seats.

Glen Murray, an urbanist representing a downtown riding, was no stranger to the transit file: as mayor of Winnipeg, he’d promoted a costly LRT corridor meant to help revitalize the city’s downtown; the plan was later scotched by his successor.

Shortly after taking office on February 11, 2013 Wynne told reporters she intended to press ahead with the so-called “Big Four” LRT projects (Eglinton Crosstown, Scarborough, Sheppard East, and Finch West), “burying,” as The Toronto Sun noted, “any prospect that Queen’s Park would be willing to revisit the agreement to build four LRT lines — including the Sheppard LRT — across the city.”

But only a month later, rumours surfaced in the media that Stintz and de Baeremaeker were hatching a scheme to revive the One City proposal to convert the Scarborough RT into a subway. FOI documents obtained by Spacing show that Stintz, in fact, had a private meeting in April with senior Ministry of Transportation (MTO) officials to discuss the idea, despite the fact that council had not granted her any authority to negotiate.

What’s more, Stintz, in pitching the subway plan to the province, was disregarding the professional advice of senior TTC officials, who had warned in a January, 2013, report against “another prolonged debate over the future of the Scarborough RT, which might jeopardize Metrolinx’s commitment to fully rehabilitate and expand the deteriorating Scarborough RT.” The report was deferred by the Commission on a vote that left some commissioners outraged.

Despite such cautions and an apparent $500 million price differential, the political planets appeared to be aligning for the subway. As de Baeremaeker told The Globe and Mail on April 26, 2013 “I am immensely confident that if we can get Toronto on record as wanting a subway the province will come on board.”

Murray, the cabinet point person, broadcast mixed messages in response. Initially, he seemed willing to play ball with council, releasing a statement on May 2, 2013 noting that there’s “always room to make improvements” in The Big Move.

A week later, he backtracked furiously: “We have 15 projects,” he told The Toronto Sun. “We’re not revisiting those projects. We’re continuing to build those projects.”

Why the flip flop? An apparent lack of consensus in the caucus. As Wynne’s principal secretary Andrew Bevan wrote in a May 9, 2013 email to a senior Murray aide: “Just want to make sure that the split among Scarborough members is all ok.”

“I can speak with them all directly,” replied Jonathan Espie, Murray’s executive director.

Besides trying to ride herd with the Scarborough caucus, Murray wanted to look at more than just mere “improvements.” On the heels of the infamous May 9, 2013 council session — during which Stintz and de Baeraemaeker got approval for a motion supporting the construction of a subway from Kennedy up to Sheppard — Murray began exploring ways of re-opening the November, 2012, master agreement that his predecessor, Bob Chiarelli, had authorized after extensive negotiations with the City.

“For tomorrow,” Dylan Powers, Murray’s legislative aide, wrote in a May 14 request to MTO staff: “could I please get an estimate of what it would cost to put our Sheppard transit projects, Eglinton LRT and Scarborough RT underground?” [ see PDF for emails ]

Senior Liberal officials, including those in the premier’s office and the ministry of transportation, then began crafting so-called “friendly” questions, to be posed in the Ontario legislature, that would allow the government to plant statements on the public record about its rapidly evolving position.

For example, a May 15, 2013 draft of one friendly question, for Scarborough MPP Lorenzo Berardinetti (husband of Scarborough city councillor Michelle Berardinetti), cited the May 9 pro-subway vote by city council, and wondered why the province wasn’t reconsidering its decision to build an LRT to replace the decrepit Scarborough RT instead of a subway. “Could the Minister update the House on why the Scarborough transit projects are not underground?” the draft question read.

The answer, to be supplied by Wynne, was clearly phrased to be open-ended: “Currently, we do not plan on revisiting these projects…. I would say that we would be happy to revisit this project if the federal government comes to the table with several billion dollars in additional funds.”

But senior Metrolinx and MTO staff warned Murray’s office against opening this door. “Much of the existing corridor is elevated now, so we want to understand the request to prepare a costing to place it in a tunnel,” Metrolinx communications official Judy Pfeifer noted in a May 15, 2013 email, adding that project costing is “not an easy calculation” and could impact the stops on the Crosstown.

“[W]ith all of these additional cost factors it could also mean there would be no funds left in the current budget for the Finch West project,” she added. “I concur,” added MTO communications manager Lisa Heaton. “Although I understand why we might want to do it, it simply reopens a debate that we have already said is done.” Murray’s officials agreed to hold off on the friendly questions until early June. [ see PDF for emails ]

Yet the strategic hedging from Murray persisted until the provincial by-election campaign in Scarborough-Guildwood, set for August 2, 2013 was well underway.

Shortly before Metrolinx issued an ultimatum to the City on June 28, 2013 — that council had to make a definitive statement about the subway plan by August 2, 2013 or risk facing financial penalties associated with potential contract cancellations — Murray’s spokesperson Patrick Searle crafted some messaging for his boss in anticipation of media questions: “We are moving forward with [master agreement plan] and are fully committed to it,” he wrote in a list of “key messages.” That position contradicted the government’s internal strategy to push the subway. [ see PDF of emails ]

The document continued: “If pressed about timing [of Metrolinx’s letter to the City, which landed at the beginning of the August 2 Scarborough-Guildwood by-election campaign],” the minister should say that “Metrolinx conducted a comprehensive review of the costs associated with this request and this took some time… If pressed on the difference between LRT and subways… In all intents and purposes, they are identical.”

While Stintz — who had met privately with Murray and his staff just two weeks earlier [ see PDF of emails ] — publicly claimed she’d been blindsided by the Metrolinx missive, Murray saw it as an opportunity to definitively recast himself as a subway warrior, and do so in the context of the by-election.

“It will be over my dead body that Scarborough goes wanting for high speed, rapid transit,” he told The Globe and Mail on July 11, 2013. “I’m not prepared for people in Scarborough to miss this round … whatever mountain I have to climb as transportation minister, I’m prepared.”

Just as the Liberals planned, the Scarborough-Guildwood by-election campaign turned out to be a referendum on the Scarborough subway proposal, and Murray’s 180-degree conversion, executed over a few months, was complete.